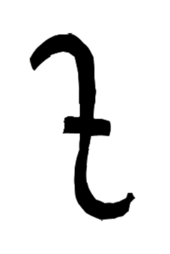 Qaidu or Kaidu Chan ( Mongolian ᠺᠠᠶᠳᠣ * 1235 /6; † before February / March 1303 ) was a grandson Ögedeis and heir of Genghis Khan , the nomadic society wanted to preserve. He was an opponent of Kubilai during the process of partition of the Mongol Empire .

Due to the disempowerment of his family when Möngke Khan ascended the throne (r. 1251–1259), he was initially without influence. He rose only as a partisan of Arigkbughas in the follow-up war with Kubilai 1260-1264 and then asserted himself in a series of smaller power struggles, especially against the Chagatai Khan Boraq (1269 Kuriltai am Talas).

Due to dynastic disputes in the Tschagatei house , he asserted himself after the death of Boraq (1271) as senior partner of the new Khan Du'a (r. 1274 / 82-1306) and thus became the main prince of Inner Asia. As such, he was able to effectively reject the centralistic and pro-Chinese policy of Kubilai Khan ( Yuan Dynasty : Chinese capital, officials and way of thinking). The attempts he supported to overthrow the Yuan dynasty (e.g. revolt of Prince Nayan in 1287) failed, however.

Qaidu was religiously tolerant, tended to Islam and, despite his nomadic way of life, protected the cities of Central Asia, whereby the administration of Bukhara and Samarkand (under Masud Beg ; † 1289 and his sons) was largely independent.

He died immediately after an unsuccessful campaign against the Yuan in which he was wounded in September 1301.

His son and successor Tschapar (also: Capar) was defeated and deposed by Du'a in a military conflict with the allies Tschagatei and Yuan in 1305/6. After an unsuccessful attempt to overthrow, he and his brothers finally fled to China in 1309/10, whereby the Tschagatei Khanate was able to re-establish itself and the Ögädai Khanate finally disappeared.