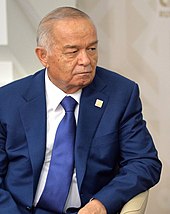 Islom Abdugʻaniyevich Karimov ( Russian Ислам Абдуганиевич Каримов / Islam Abduganijewitsch Karimow ; born January 30, 1938 in Samarqand , Uzbek SSR , Soviet Union ; † September 2, 2016 in Tashkent , Uzbekistan ) was an Uzbek politician. From 1991 until his death he was President of Uzbekistan and Chairman of the Liberal Democratic Party of Uzbekistan , the country's dominant party.

Karimov grew up in a state Soviet orphanage. He studied mechanical engineering and economics at the Tashkent Polytechnic Institute . In 1964 he joined the Communist Party and initially worked as a development engineer in Uzbek aircraft construction before moving to the state administration. From 1983 to 1986 he was finance minister and deputy head of government.

In 1989 he succeeded Rafik Nizhanov as the first party secretary in Uzbekistan. In 1990 he rose to the highest political body in the USSR; for the period from July 14, 1990 to August 24, 1991, he became a full member of the Politburo of the Communist Party of the Soviet Union (CPSU). From March 24, 1990 he was President of the Supreme Soviet of the Republic of Uzbekistan. During this time he was an active supporter of the independence of all union republics and declared the independence of Uzbekistan on August 31, 1991 after the failed August coup against Mikhail Gorbachev .

Dmitri Medvedev on a state visit to Karimov, 2009

Karimov on the CSTO -Meeting

Karimov with his wife (right) and South Korean President Lee Myung-bak on February 11, 2010

From the first direct presidential elections on December 29, 1991 , he emerged victorious with 86% of the vote and became the first president of the independent Republic of Uzbekistan. Numerous members of the opposition then went into exile, some were imprisoned for several years and several disappeared forever. Through the parliamentary elections in Uzbekistan in 1994/95 , Karimov was able to further consolidate his power through the election victory of his People's Democratic Party of Uzbekistan .

In 1995 Karimov had his term in office extended in a referendum . In the 2000 presidential election in Uzbekistan on January 9, 2000, he was confirmed with 91.9% for another term of office. The vote was described by the US as "neither free nor fair"; the only opposing candidate said he had voted for the president himself. In a referendum on January 27, 2002, his term of office was again extended to December 2007.

On May 13, 2005, there were in the city of Andijon to demonstrations against the regime . The military fired at the insurgents and at uninvolved citizens; up to 500 people were killed and around 2000 injured. Karimov denied having given the order to shoot. To date, it is unknown what happened to the remains of those killed.

Contrary to Article 90 of the Uzbek Constitution, which provides that the five-year term of office of the President can only be extended once, a renewed candidacy of Karimov in the presidential election in Uzbekistan announced for December 23, 2007 was announced. According to the election commission, Karimov won this unconstitutional election with 88.1% of the vote. Three other candidates came to about three percent each. However, they did not campaign and in some cases even spoke out in favor of the incumbent. With the election, Karimov was confirmed as president for another five years. The Organization for Security and Co-operation in Europe (OSCE) stated that the election did not meet numerous criteria for democratic elections. The same applied to the presidential election in Uzbekistan in 2015 , in which Karimov was re-elected for the last time with over 90% of the vote.

Karimov is the author of several books, including Uzbekistan on the Eve of the 21st Century: Threats to Security, Conditions of Stability, and Guarantees of Progress . This book is compulsory at the state universities in Uzbekistan.

Karimov was married to the economist Tatiana Akbarovna Karimova. The couple had two daughters and three grandchildren. The older daughter, Gulnora Karimova , worked as an advisor to the Uzbek ambassador to Russia . She is said to have built a ramified business empire that includes Uzbekistan's largest cell phone company, nightclubs , a large cement factory, and Coca-Cola UZB.

Although Gulnora Karimova was long regarded as her father's successor, she has been under house arrest since April 2014 . In a handwritten letter that reached the BBC, she complained of beatings and scars allegedly inflicted on her during arrest. There was a month-long power struggle within the family before Gulnora's apartment was stormed by an Uzbek special unit. Via Twitter , Gulnora brought up her six-year-old sister Lola and her mother Tatjana. She accused them both of plotting against them together with the Uzbek State Security.

Karimov died of a stroke at the age of 78. His death had been rumored for days before it was officially confirmed on September 2, 2016. He was buried in the Khidr mosque in Samarkand.

Karimov's policies regarding human rights and freedom of the press have been heavily criticized internationally. In particular, the former British ambassador to Uzbekistan, Craig Murray , has brought reports of the murders of opponents of the regime to the public. Karimov's repressive style of government has resulted in Uzbekistan ranking 161st out of 167 countries in the Democracy Index published by The Economist in 2016. In the ranking of press freedom by “Reporters Without Borders” from the same year, the country ranks 166 out of 180 countries.

The United Nations rated torture in Uzbekistan as "institutionalized, systematic and widespread". In 2004, around 7,000 people were politically and religiously persecuted.

Karimov received support both from the US government, which transferred 202 million euros for the Uzbek army and security units in 2002 , and from the then German Foreign Minister Joschka Fischer , who repeatedly expressed his benevolence towards the regime, as well as his concern expressed about the situation in the country.

President of Uzbekistan (since 1991)