Andizhan is a redirect to this article. Further meanings of both spellings are listed under Andijon (disambiguation) . 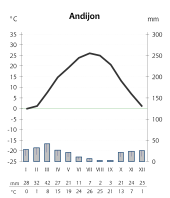 Andijon or Andischon (Uzbek-Cyrillic Андижон [ andiʤɒn ]; Russian Андижан Andischan , also transcribed as Andizhan ) is a city in eastern Uzbekistan with 318,439 inhabitants (as of January 1, 2005). It is located 475 kilometers east of Tashkent in the Fergana Valley and is the capital and cultural center of the Andijon province .

The city was founded in the 9th century. Andijon developed into an important trading hub on the Silk Road over time . In the second half of the 14th century it belonged to the Timurid Empire , in 1375 Timur appointed a governor here . In the 15th century it was declared the provincial capital.

In the 18th and 19th centuries it was part of the Kokand Khanate .

In 1876 Russian forces took the city. The Andijon uprising against the rule of Tsar Nicholas II was brutally suppressed in 1898.

The city is the birthplace of the founder of the Mughal Empire, Mohammed Babur Khan (1483-1530). The museum opened in his honor in 1989 is considered a sight .

The artist Peter Cheban , a painter of romantic realism , was also born in Andijon in 1952 .

On the evening of May 13, 2005, Islom Karimov , the dictatorial ruler of Uzbekistan since 1989, had demonstrations by military units and special units of the Ministry of the Interior put down. Several hundred people died in the process. There are contradicting and no independent accounts of what happened.

The night before a prison was stormed by a group of people who freed many of the approximately 730 prisoners held there. The unrest was triggered by an upcoming trial against 23 people suspected of terrorism or radical Islamism . They were accused of having contacts with the banned Hizb ut-Tahrir .

Andijon is an industrial center (electronics, textile, food industry). Nearby is cotton grown and petroleum and natural gas promoted.