Topographic map of the Ferghana Valley, which stretches from Khujand to Osh

Political map of the valley stretching from Khujand to Osh

Landscape in the Uzbek part of the Ferghana Valley, west of Fargʻona

The valley is traversed by the Syr Darya River in a westerly direction and extends roughly from Khujand in the west to Osh in the east. More than ten million people and thus 20% of the population of Central Asia live in the valley, which is only 300 km long and up to 110 km wide. This is generally considered to be the cultural center of Central Asia. The valley is spread over the national territories of Uzbekistan , Tajikistan and Kyrgyzstan .

The valley forms the middle part of the most important Central Asian east-west corridor through the high mountains: In the east lies the Tarim basin and behind it China, in the west the historical areas of Transoxania , Khorezm and Khorasan ; Historically, the Ferghana Valley is included in Transoxania. In the northeast, separated by high mountains, lies the Siebenstromland .

The population of the Ferghana Valley is diverse and includes Uzbeks , Kyrgyz , Tajiks , Tatars and people from a large part of the minorities of Central Asia. There were repeated conflicts, such as in the late 1980s / early 1990s and in spring 2010 (see riots in southern Kyrgyzstan 2010 ). These also claimed death several times.

Most of the residents of the Ferghana Valley are Muslims. An important figure of reference for local Islamic piety is ʿAbd al-Qādir al-Jīlānī . There are numerous songs in honor of this saint, which are mainly sung by women when they want his help.

The valley can be reached from Uzbekistan on a mountain road over the 2267 m high Kamchiq Pass. The 19.2 km long Kamchiq tunnel , part of the Angren – Pop railway line opened in 2016, was built under the pass . 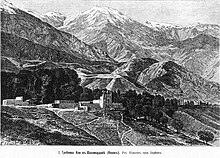 Tomb of Ali in Shohimardon in the Fergana Valley

The first traces of settlement date back to the Middle Bronze Age . Many settlement remains and necropolises are known, especially from the north-western area . The inhabitants of these settlements apparently practiced cattle breeding and metallurgy. Around 1500 BC The Middle Bronze Age Andronovo culture was replaced by the Late Bronze Age Tschust culture , whose bearers were probably already farming. Around 900 BC The Ejlatan culture emerged , named after the fortified city of Ejlatan .

In the younger Iron Age , the Ferghana was part of the Dayuan Empire , which was known for its highly developed agriculture and horse breeding. Significant settlements of this time are Shurabashat and the younger Marchamat. Around 329 BC Alexander the Great conquered the Fergana Valley in the 3rd century BC. Then it became part of the Graeco-Bactrian Empire . In the period that followed, the Ferghana Valley was alternately ruled by different peoples until it was conquered by the Gök Turks in the 6th century . From here, Babur , a descendant of Timur , set out to conquer India and found the Mughal dynasty .

The Chanat of Kokand , which was founded in the years 1710 to 1720 and had its center in the Fergana Valley, also included the oases of Tashkent and Chimkent as well as the land of the Seven Rivers . This khanate developed in the 19th century into an important land-based state, which was in the immediate vicinity of the Emirate of Bukhara and became its fiercest competitor. In the period between 1810 and 1822, when ʿUmar Chān ruled over the Chanat, literature in the Ferghana Valley experienced its heyday. In the 18th and 19th centuries, the Qādirīya order also spread in the Ferghana Valley, especially in the cities of Margilan and Kokand , where the Qādirīya preacher Niyāz Ahmad Qādirī lived. The Naqshbandīya also had a very great influence on the population. The inhabitants of the Ferghana Valley conscientiously followed the instructions of the sheikhs of the two brotherhoods.

During the Soviet period the Fergana Valley was a center for uranium ore mining. The first Taboshar mine went into operation in 1945.

In the early 1990s, after the dissolution of the Soviet Union , the Ferghana Valley became the operational area of ​​various Islamist groups such as Hizb ut-Tahrir and, to a lesser extent, especially in Uzbekistan, the Akramiyya , named after its founder Akram Yuldashev (* 1963 in Andijon ). In the Tajik part of the Ferghana Valley, the Isfara district has been a refuge for conservative Islam since the Soviet era. The local village of Tschorkuh is a stronghold of Islamist groups.

The main branches of economy are irrigation ( Great , Southern and Northern Ferghana Canal ; cotton , rice , fruit , wine ); Mining (especially fuels), light and heavy industry. Due to the idiosyncratic demarcation between the former Soviet republics under Stalin , important traffic connections in the Ferghana Valley are now interrupted by state borders.