Tajik is a redirect to this article. For further meanings see Tajik (disambiguation) .

The word Tajik ( Persian تاجيک, DMG Tāǧīk ; tdk. Тоҷик), in earlier forms also Tāzīk or Tāžīk with the original meaning "Arab", has been another term for " Persians " since the Middle Ages , especially in the Iranian and Turkic-speaking parts of the Islamic world .

The name has its actual origin in the Arabic tribal name "Ṭayyiʿ". After the Muslim conquest of Persia, these settled as the most prominent Arab group in Central Asia. In the course of the Turkish and Mongolian conquest of Central Asia, the name was first transferred to all Muslims, but later specifically to the Persian-speaking and Iranian majority of the population in the region.

Today, the term is primarily understood to mean the Persian-speaking population of Central Asia, primarily Tajikistan, which is named after them . In a broader sense, the term is also extended at a political level to related neighboring peoples in Afghanistan and China , but this is not always uniform. So z. B. The also Persian-speaking Hazara and Aimaken are usually not counted among the "Tajiks", while non-Persian-speaking, but Iranian peoples in China or Berg-Badachschan are considered to be "Tajiks". B. the Tajiks of China .

As a self-designation, the literary neo-Persian term Tajike, which originally had a derogatory use as a term for Persians or Iranians, has become more and more acceptable in today's Iran , especially in the 20th century, due to modern borders and differentiation from the Persians . Alternative names for the Tajiks are Persians from the East , Fārsīwān (Persian / Persian-speaking) and Dīhgān , which translates as "farmer or settled villager", in the broader sense "settled" as a contrast to "nomadic".

In Sassanid and early Islamic times, the term Dīhgān was used for landowners and barons of "Noble Persian Blood".

Emomalij Rahmon , President of Tajikistan , cultivates a pronounced personality cult around him and stylizes the Tajiks of his country as the successors of the Samanids.

The history of the Tajiks is made up of the individual history of the individual Iranian peoples of the region. It begins with the immigration of the Aryans in Central Asia (approx. 2000 BC), continues with the emergence of Zoroastrianism (approx. 1700 BC), the rise of the Persian Empire (550 BC) , the triumphal march of the Macedonians (330 BC), the Parthian Empire (220 BC), the Sassanid Empire (220 AD) and the conquest of Persia by the Arabs (650 AD) which begins the real story of the Tajiks.

The Tajiks trace their origins back to the Iranian Samanid dynasty (900 AD), the first indigenous rulers after the Arab invasion and before the Turkish conquest. During the Samanid rule were Persian language and Iranian culture revived. This “rebirth” of Iranian in Central Asia is generally considered to be the origin of today's Tajiks.

The modern currency of Tajikistan , Somoni , goes back to the name of that dynasty.

For the more detailed history of the Tajiks, see also:

The Tajiks are predominantly Muslim , the vast majority of whom are Sunnis . Significant Shiite centers are mainly in the Pamir region of Badachshan ( Ismailis ) and in Herat ( Twelve Shiites ). There are also numerous followers of the pre-Islamic Zoroastrian religion. The Imamite Kizilbasch , descendants of Nadir Shah's garrison troops, are also among the Tajiks . After emigrating in the course of the 20th century, only a small minority of Bukharan Jews have lived in the region of the former Emirate of Bukhara since 1991 . 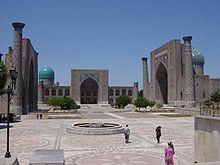 "Registan" in Samarkand - the (former) cultural center of the Tajiks

The Tajiks and the Persian culture have significantly shaped the image of the Orient . Probably the best known work of Muslim - Persian literature in the western world is the collection of stories 1001 Nights (Pers. Hezar-o yek-Schab هزار و يكشب). Tajik centers such as Samarkand , Herat and Balch play a central role in this.

The best known art music style of Tajik music is the Shashmaqam ("six maqame "). The heart of Persian-Tajik culture was and is the art of poetry . Nowhere else is poetry so important in people's everyday lives as in the Persian culture. Tajik poets have made significant contributions to the development of the New Persian language and identity, including: a .:

Also Tajiks were some of the most famous scientists, scholars and artists of the Middle Ages:

The Afghan war hero Ahmad Shah Massoud , who was murdered by two suicide bombers in 2001 , also belonged to the Tajik people.