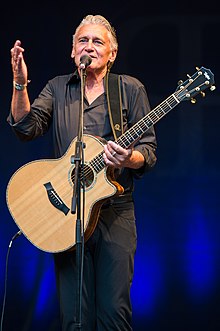 Rainhard Jürgen Fendrich (born February 27, 1955 in Vienna ) is an Austrian songwriter , presenter and actor . He is one of the most successful representatives of Austropop and decisively shaped this genre .

Fendrich's mother was a Sudeten German, his father's family comes from Serbia. His father was a mechanical engineer, his mother a mannequin . He has a younger brother by six years, Harald Fendrich, who is also a musician in his band the bass - guitar played and now at WIR4 ( Ulli Bäer , Gary Lux is Harry Stamper). At the age of ten Fendrich came to a Catholic boarding school , in which he lived until the age of 17. At the boarding school he was an acolyte and sang in the choir. His piano lessons were canceled because he was too bad at math. According to his own statements, he found himself "plump" and not very attractive as a child. When he got a guitar at the age of 15, he taught himself the fingerings and also began to write. Frustrating experiences with girls at the time find their expression later, for example in Cyrano (1991) or Frieda (2001). He broke off a law degree to finance acting and singing lessons with various jobs.

Fendrich appeared at the Theater an der Wien from 1980 (in Die Gräfin vom Naschmarkt ) and was there in 1982 as Judas in the successful musical Jesus Christ Superstar . In 1980 he was hired by Hans Gratzer for a series of performances of Hamlet in the Schauspielhaus , had one of his first television appearances as a singer in the ORF broadcast Wir-extra for the benefit of children in the third world and got his first record deal .

Another appearance followed in Tritsch Tratsch in 1981 with the song two-person relationship (a man with his car). The debut album I never wanted to be one of them was released in May of the same year, but initially failed to achieve high sales.

Months later, in August 1981, he landed the Austrian summer hit of the year with Strada del sole (in a similar style, via a “holiday relationship box”). The single sold 99,000 times in Austria, which would correspond to today's status of triple platinum . In addition, the song was voted 14th of the “100 most important Austrian pop songs” in 2020 by the pop culture magazine The Gap in the AustroTOP ranking. The second album, And everything turned out very differently, was just as successful . The next number one hits followed in 1982 with Schickeria and topless . At that time, Fendrich was already being celebrated as the shooting star of Austropop.

In 1983 Fendrich presented his first compilation called A tiny little drops of time . In the same year he also appeared with Wolfgang Ambros at the end of school open air in Vienna's Gerhard Hanappi Stadium . This concert was released on a live compilation with the album Open Air .

With Up and Away Fendrich had another success in 1983. Although the long player couldn't quite meet the commercial expectations of the previous album and the single releases didn't make it either, Fendrich performed at several sold out concerts on his tour. As a result, the song Weus'd a Herz hast wia a Bergwerk was available twice as a single in a studio and a live version.

After a brief retreat from the public, the albums Wien bei Nacht and Kein Schöner Land were released in 1985 and 1986 . Another live compilation was also released.

With Macho, Macho , mostly sung in Viennese style , one of his singles reached the top position for the first time in 1988. This was also followed by the big breakthrough in Germany with second place. A top 3 position was also achieved in Switzerland. Fendrich wrote the song in five minutes; it was inspired by an article in Brigitte magazine .

In Austria and Germany equally well known is his appearance with Reinhard Mey , with Ein Loch in der Kanne in the television program Was Wouldn't If (1988).

In 1989 the long player From Time to Time was released , which by far failed to meet Fendrich's commercial expectations. The releases Von Zeit zu Zeit and I Am From Austria also turned out to be a flop for the time being. Subsequently, however, the title I Am From Austria developed into the “secret national anthem of Austria” and in 2011 it was voted the “greatest Austrian pop hit of all time” as part of the ORF broadcast Austria chooses .

In 1991 the album Nix is ​​fix was released , produced by Tato Gomez at BMG Ariola , which could repeat the success of earlier times. The album stayed in the Austrian charts for 32 weeks and was at number 1 for five weeks.

A year later Fendrich performed with the Wiener Symphoniker at the opening of the Wiener Festwochen . Under the project “Vienna Symphonic Orchestra Project” (VSOP), by and with Christian Kolonovits , who conducted the concert and where the Arnold Schoenberg Choir also participated. This concert was released as an album and surprisingly after a while made it to first place on the Austria music charts .

Fendrich took over in 1993 after Rudi Carrell moderating the ARD telecast Heart Journal , which he presented to 1997 on German television. In the same year he started the comedy show Nix is ​​fix (ORF / ARD). The cabaret and media-critical format was not continued despite good reviews.

A special postage stamp was issued by the Austrian Post in 1993.

In addition, the album Brüder was recorded, which after a long time was able to place itself again in Germany. Even the singles Midlife Crisis and Brothers , which are rather unpopular in Austria , made it into the German charts. At that time the album was received rather negatively by the media in Fendrich's homeland, despite its great commercial success. The reason for this was that Fendrich slowly turned away from the Viennese dialect with this long player. The ballad album Songs with Feeling was also presented as an advertising campaign for Herzblatt .

For a long time in the mid-1990s, Fendrich did not make any musical contributions. His big comeback came with the album Blond . The title track should also be his last big number one hit so far. The single blond was sold 10,000 times in Austria and was awarded gold. In addition, the song was played as one of the few Austrian songs on the radio after the program reform of the most popular Austrian broadcaster Ö3 .

In 1997 Fendrich initiated a one-time benefit concert for the benefit of the homeless, at which he performed together with Wolfgang Ambros and Georg Danzer . The overwhelming success led this team to appear as Austria 3 (A3) until 2006, which resulted in joint live albums and compilations . The band announced their upcoming separation on June 10, 2006. Their last concert took place on July 24, 2006 in Altusried , Swabia . On April 16, 2007 the Freundeskreis met again at Georg Danzer's comeback concert in the Wiener Stadthalle to perform three of their old songs; afterwards a possible comeback was planned from several sides, but Georg Danzer died on June 21, 2007 of lung cancer.

Also in 1997 he had success as a film actor in the lead role of Divorced Fröhlich (ZDF) alongside Christina Plate and Helmut Fischer . In 1998 he played Billy Flynn in the musical Chicago in the Theater an der Wien, in 2002 and 2003 he appeared as Jeff Zodiak in the musical WakeUp, which he wrote and arranged by Christian Kolonovits and Harold Faltermeyer , with less success in the Raimund Theater .

He received the Golden Romy three times (1994, 1995, 2000) . He was nominated four times for an Amadeus Austrian Music Award , which he won once (2002). In the course of an Austria-wide survey by NEWS magazine , he was also voted “best entertainer of the decade” this year.

Rainhard Fendrich moderated the Millionenshow from 1999 to 2000, as the first moderator in Austria . Then in 2005 the game show Deal or No Deal . Both upper shows on ORF. From 2008 on the private TV station ATV " Sing and Win! " (Modification of the US format "Don't forget the lyrics" )

When Fendrich was found to have bought cocaine in early April 2006 in the course of police surveillance of a dealer ring , he confessed and claimed to have been using it for 15 years. Immediately afterwards, the artist went through voluntary withdrawal and has since participated in anti-drug campaigns, but was sentenced to an unconditional fine of 37,500 euros in May for possession of cocaine and the (later largely abandoned) “passing on of drugs”.

In late summer 2010 it was announced that Fendrich would be a father again. A few weeks later, Meine Zeit, his first studio album after a four-year break, was released. After a few days of sales, the album reached gold status and number 1 on the Austrian charts. On December 4, 2010, Fendrich married his long-time girlfriend Ina Nadine Wagler in Berlin . Their son was born on March 10, 2011. After the couple separated in 2012, the divorce took place in November 2016.

Fendrich has a holiday home with a studio on Mallorca . 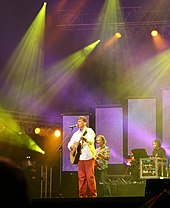 When his friend and Austria 3 partner Georg Danzer had to cancel his concert at the Vienna Danube Island Festival 2007 at short notice due to his advanced lung cancer, Fendrich stepped in “instead of and for Georg” - the fee was to remain with Danzer. He died on June 21, two days before the concert, which with 200,000 fans was the best-attended of the event.

On November 30, 2007, his single Wir sind Europa was released , which he recorded the previous summer with the Vienna Boys' Choir , Marc Janko , Andreas Ivanschitz and Helge Payer for EURO 2008 .

From March 11th to autumn 2008 Fendrich hosted the television program Sing and Win! on ATV .

On September 24th, 2009 Rainhard Fendrich released the album Meine Zeit . This includes the songs Man is as he is , Bussi, Bussi and Abschied , which is dedicated to Georg Danzer and which addresses Fendrich's handling of his death. My time climbed to the top of the Austrian charts at the beginning of October 2009.

On May 10, 2013, the album Besser wird's nicht was released , including the single Die, die wandern . The album also reached number 1 in the Austrian charts. The album was accompanied by an extensive tour.

At the beginning of January 2015, Rainhard Fendrich released the album “Auf den zwei Blick” on the occasion of his 60th birthday. For this album he has re-recorded some of the less well-known pieces from the past thirty years.

His 17th studio album Schwarzoderweiß was released on October 7th, 2016 , with the singles Wenn du Was Wollen and The highest of feelings .

On March 2, 2017, Fendrich had to end his concert in Salzburg after a short time due to acute voice problems. On March 3, 2017, his management announced that the next appointments would have to be postponed until further notice, as Fendrich had received a strict ban on singing and speaking from the doctor due to a laryngitis. A short time later, the alternative dates for the concerts in Austria and Germany were announced.

In September 2017, the jukebox musical I am from Austria, based on Fendrich's songs, premiered in the Raimund Theater in Vienna .

In 2019 a new studio album was released under the title "Starkregen".

Fendrich is a devout Christian. In an interview with a church magazine in November 2010, he answered the question "Does tolerance stop with faith?":

"I accept any atheist, but an atheist is a fool to me. Because everyone who walks through nature with alert eyes, regardless of which religion they belong to, has to notice at some point: Somebody did it who is smarter than us. Belief is something that I've long repressed. But it was always there and now I have found it again. I felt very bad for a while. Faith was my help. "

After reading the books In the Name of God? by David Yallop and Vatican AG by Gianluigi Nuzzi he resigned from the Catholic Church.