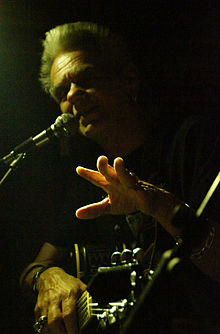 He became known in the early 1980s when he was able to place himself in the charts with his dialect song Der Durscht . After two more commercially successful singles and despite several album releases, it became quiet about the musician. In 1985 he participated in the project Austria for Africa in part. Since the 1990s he has played guitar on the tours of well-known musicians such as Georg Danzer (there for over 14 years) and the former trio " Austria 3 " (he had played for 9 years, according to him, as Kapellmeister for the band ) on. As well as the band "WIR 4", these are Ulli Bäer, Gary Lux , Harry Fendrich (brother of Rainhard Fendrich ), and Harry Stampfer.

In his youth, Ulli Bäer played on various instruments in different amateur groups, then concentrated on playing the guitar and was finally able to win 10 hours of recording time in a band competition in Renee Reitz's studio in 1977 . With this he booked a number of hits such as Schöne Madl , Der Durscht , Verkrampf di net and ears open and came to the fore of Austrian pop music .

At the beginning of 1984 Ulli Bäer changed management and record company. On his LP Adults There's gnua there were a number of slower numbers. The producers were Wolfgang Ambros and Peter Koller. After the cover versions of well-known rock hits from the 1960s with Ulli Bäer's dialect adaptations were played on the radio on this LP, he decided to record exclusively his own songs again on his next record Alle Lichter . Wolfgang Ambros was again the godfather as a producer in the Power Sound Studio, where the songs of the new LP were recorded in August 1985. Ulli Bäer has chosen famous choir singers for three songs (Rainhard Fendrich, Christian Kolonovits, Andy Radovan).

In 1990 he worked with Peter W. Kevin on the LP Der Bäer ist los . In 1993 he made a recording with Wienerliedern Wien on the tip of his tongue . Since 1992 he was busy with his combo "The Boys from Hairnoise". Blues and rock'n'roll of the 1960s and 1970s formed the basis for this. In the summer of 1993 Georg Danzer invited people to sing and make music together to record his CD Close-up in the studio. The result was a cover version of the Dalla / Morandi hit Vita , in German: Leben nur Leben . In 1994 he joined the newly formed Danzer Band as guitarist and second voice. In 1997 Ulli Bäer played numerous concerts in Austria with his music colleagues in the formation of Bäer / Danzer / Baum. From November 1997 he played as guitarist in the project A3 of Ambros / Fendrich / Danzer.