Gandhāra was an ancient region around the city of Peshawar , which today forms the border area between Afghanistan and Pakistan . The center was on the Swat and Kabul rivers , tributaries of the Indus , the particularly important city Taxila was east of the Indus to the Margalla Hills (Wah district). 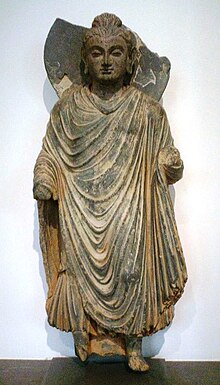 From the middle of the 1st millennium BC Gandhāra was one of the 21 satrapies (provinces) of the Persian Empire of the Achaemenids . The largest cities were Taxila (35 km northwest of present-day Islamabad ), made capital by Darius I (549 - 486 BC), and Peshawar. After Alexander the Great (356 - 323 BC) had already conquered large parts of the former Persian Empire, he took it in 326 BC. BC also a Taxila, whose ruler surrendered to him without a fight.

After the death of Alexander, his world empire soon disintegrated into a large number of smaller successor empires (see also Seleucids ). At the same time, the influence of the Indian Maurya dynasty grew under its founder Chandragupta Maurya , who incorporated Gandhara into his empire. Middle of the 3rd century BC Chr. Spread among Ashoka of Buddhism in the region of Gandhara. After that, Gandhara lay until the 1st century BC. BC under the influence of the Greek kings of Bactria , then the Persian Parthians , who at the same time established a colony in the south of the Indian subcontinent . The Saks , who at that time had settled in the area of ​​today's Kandahar and fused with the resident Iranian Arachosians , became vassals of the Parthians. Taking advantage of the Parthian- Roman conflict, the Arachosians expanded their sphere of influence by succeeding the Indo-Greeks in the Indus basin , who previously went to eastern Iran (today the North-West Frontier on the Suleiman Mountains in the southeastern Hindu Kush ) and displaced the indigenous Indians.

In the 1st century. Chr. (About 50 od. 70) was Gandhara center of Kushan -rich the Yuezhi (Indo- Scythians , possibly from the northern Chinese province of Gansu ), whose capital, near the present-day Kabul was. Under the pressure of the Sassanids, the influence of the Kushana waned. Around 330 the Gupta empire came into being, which collapsed in the early 6th century with the conquest of the area by the so-called Alchon group (who cannot simply be equated with the Hephthalites , the white Huns of Prokopios of Caesarea , see Iranian Huns ). These drove the Gandharians out of the area. The remaining Kushana empire had already largely merged into the Sassanid Empire (" Kuschano-Sassanids "), which Gandhara temporarily brought back. The Gandharians, who emerged from Indo-Greeks, Saks and Arachosians, mixed with the Bactrian Cushans and Persians. At that time they had been speaking the old Persian Old Dari , called Mekhi , for a long time . This development can be attributed to the Kushans and the Sassanids.

A bodhisattva sculpture from the Kushan period

Gandhāra is known for the distinctive Gandhāra style in Buddhist art , an aftereffect of Graeco-Buddhist syncretism , Indian and Hellenistic influences as well as those of the Persian empires in the centuries after Alexander the Great's conquests of Central Asia around 330 BC. Fused together.

The earliest Buddhist manuscripts, which are also the oldest Indian manuscripts, were found in Gandhāra (see Gandhāra scriptures ). The language of this time, the Gandhari , was derived from Prakrit and was related to Sanskrit . It was written in the Kharoshthi script . With the rule of the Kushāno-Sassanids, Gandhāri was replaced by Mekhi.

The heyday of the Gandhāra style was from the 1st century under the Kushāna dynasty to the invasion of the White Huns in the 5th century. Starting from Gandhāra, Buddhism found its way to East Asia, China and subsequently to Korea and Japan via the Silk Road .

Gandhāra is also believed to be the location of the mystical Dhanakosha Lake , the birthplace of Padmasambhava , the founder of Tibetan Buddhism . The Kagyü Line connects the lake with the Andan Dheri Stupa , which is located near the small town of Uchh near Chakdara in the lower Swat Valley . It is said of it that a spring rises in its base that feeds the lake. Archaeologists found the stupa, but no spring or lake.

The later Buddhist culture in the Bamiyan valley , which lies further north in the center of today's Afghanistan, with its world-famous 35 and 53 meter high Buddha statues was significantly influenced by the Gandhāra style. The statues were carved into a rock wall made of red sandstone in the 5th to 6th centuries AD, had togas in Graeco-Buddhist style and were decorated with precious stones.