Along with Nyingma , Sakya and Gelug, Kagyu is one of the great school traditions of Tibetan Buddhism .

The Kagyu school of Tibetan Buddhism go to Marpa the translator (1012-1097) back of the Mahamudra - lineage of Tilopa (988-1069) and Naropa (1016-1100) led further. He is one of the great translators who started the New Translations ( Sarma ) tradition. The Sarma schools of the new translation period today include the Kagyu, Sakya and Gelug schools , in contrast to the old translations from the 9th century, from which the tradition of the ancient translations ( Nyingma ) developed. 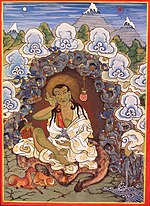 Marpa's main pupil was Yogi Milarepa (1042–1123), who was widely known in Tibet because of his hard teaching time and his spiritual chants . Milarepa's most important students were the later Tertön Rechung Dorje Dragpa (Rechungpa) (1084–1161), who handed down the life story of Milarepas, and the monk Gampopa (1079–1153) from Dagpo . Gampopa became famous for his scholarship. His work on the stepped path ( Lamrim ) " Jewelery of Liberation " is also known in the West . He established the form of teaching typical of the Kagyu schools by merging the monastic tradition of the earlier Kadampa and the yogi tradition of the Indian masters.

Schools of the Kagyu tradition

Gampopa Dagpo Lhaje, the large and small Kagyu schools go back to him

From Gampopa's pupil Phagmo Drupa Dorje Gyelpo (1110–1170) eight more, the so-called “small” Kagyu schools, go out. Although they are historically referred to as “small” schools, some of them have since become more important than some of the large Kagyu schools. The eight small Kagyu schools are:

Only a few of these Kagyu lines have survived as independent schools.

Other schools related to the Kagyu tradition:

The main transmission of the Kagyu schools is the teaching of Mahamudra , which was transmitted from Naropa to Marpa and which Gampopa expounded in various works. The so-called “ Six Yogas of Naropa ”, which can be found in almost all school traditions of Tibetan Buddhism, are also of great importance in the Kagyu schools. Important tantric practices that are passed on in the Kagyu schools are the yidam practice via Chakrasamvara , Hevajra and Vajravarahi .

In the 19th century, under the master Jamgön Kongtrül Lodrö Thaye and others from the Kagyu lineage, the so-called " Rime Movement" arose, which collected group-wide teachings from all areas of Tibet and from masters of all traditions.