This article explains the type of sailboat. For the acronym YAWL in computer science, see Yet Another Workflow Language . 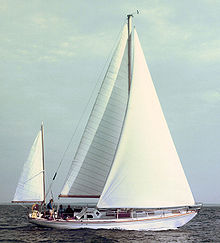 The yawl (from Dutch Jol ) is a sailing boat , it is similar to the ketch , only here the mizzen mast , which is also called driver mast, stands outside the (construction) waterline and is usually significantly shorter (max. 50% of the main mast ) than that of the ketch. The mizzen schot is due to the very far aft often performed standing mizzen mast via a tail boom. Yawls usually have more elegant lines and rigging than ketches, as the main mast can be further aft and there is more space for headsails . As with the ketch, your main mast can be 7/8, top or cutter rigged.

In practice, the mizzen is mainly used for propulsion on a ketch, and mainly for balancing the center of gravity on a yawl. Therefore, compared to the ketch, the mizzen can also be smaller and the large larger. The main sail of a yawl usually has a similar area to the main sail of a comparable sloop .

The yawl rig was originally developed for fishing boats. A good example of this was the Salcombe Yawl , a traditional small fishing boat built in Devon . In its heyday, the rig was particularly popular with single-handed sailors, such as circumnavigators such as Joshua Slocum or Francis Chichester , as yawls can be trimmed to follow a given compass course even with minor wind deviations. Modern self-steering systems and navigation aids have made this property less valuable. Another reason that yawls are rare today, is the displacement of the yacht stern by the yawl incompatible concave transom , athletic, because it allows a higher hull speed, practical, because the absorption of floating persons or exceed the dinghy with a Transom stern with bathing ladder is easier.

Ketsch and Yawl are also referred to as 1½ masters.

In the example shown, the yawl is cutter rigged because it drives more than one headsail. And she has a partial rig (she is "7/8" rigged ). She also drives high or Bermuda sails . The aft mast (mizzen mast) does not have a forestay, but has a jumpstay and a jumpstage .