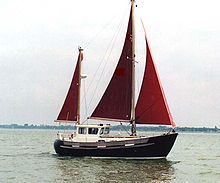 A ketch (also: ketch ) is a sailing boat with two masts , the front main mast and the aft, smaller and smaller mizzen mast . The ketch (in contrast to the yawl ) has its mizzen mast within the (construction) waterline . Other definitions say "within the length between the perpendiculars ", i.e. in front of the rudder axis or "in front of the helmsman". For most ketch rigged boats, all three definitions apply. Since the mizzen mast is smaller than the main mast, a ketch is also called a master and a half. A two-master with a smaller or equally large front mast and side sails is called a schooner , in contrast to a ketch and yawl .

The ketch was developed for fishing and coastal navigation in England around the mid-17th century , with lifting capacities of up to 50 tons.

The ketch is a popular long-distance sailor because the mainsail is closer to the yaw axis and thus has almost no influence on the yaw moment. The additional mizzen , on the other hand, has a large distance to the yaw axis and thus compensates for the pressure of the headsail very effectively. Ketch-rigged boats can often be trimmed so that they steer themselves without additional equipment.

Another advantage is the greater division of the sail plan . The individual sails are smaller (than on a sloop, for example ) and can therefore be set and retrieved more easily or by fewer crew members. Often, when the wind increases , you can reduce the sail area appropriately by hiding a whole sail instead of reefing it . The ketch can also only be driven under a mizzen and jib .

Disadvantages of the ketch rigging are the mostly higher weight due to the second mast and the additional costs for it. In addition, the ends of the ship become heavier (a mast in the stern; the main mast closer to the bow), which makes the boat more sluggish in rough seas and allows it to dive deeper into the waves. The mizzen covers the mainsail in aft winds and when the wind is blowing the mainsail can interfere with the flow of the mizzen.

The ketch usually has sloping sails on both masts , and more rarely in classic rigging also topsails . Mostly these are gaff or high sails (especially on yachts ), more rarely sprits or lug sails .

Some ketch-rigged English cargo sailors use “ketch” as their type designation. The West Country Trading Ketch (around 25 m long, the hull is similar to that of the schooner) was particularly widespread on the south-west coast of England and in Wales . A similar type of ship is the Cowes Ketch (13 m long, vertical stern ), which was used as a cargo ship between the mainland and the Isle of Wight .