Spriet is a redirect to this article. For the Belgian cyclist see Roger Spriet . 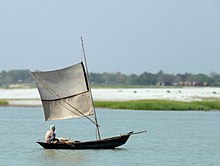 As Sprietsegel quadrangular are sail of a ship or boat designated by a spar , diagonal, a round timber from the Mast splayed be.

Like all sails attached in the longitudinal direction of the ship, spritsail belong to the Schrat sails . The rod on which they are stretched is called Spriet , and its protruding end piece is called Piek . The four edges ( leeches ) of the sail are named upper , aft , lower and luff , the corners are called head , neck , clew and spriethorn or prick .

A special form of Sprietsegels is the Spreizgaffelsegel on Spreizgaffelketschen and Spreizgaffel savers . It is attached to a spreading gaff that is guided between two masts. Spreading sails are also widespread in the South Seas and are held there by means of curved gaffs .

Roman ship with spritsail entering the port of Rome. The spar is largely covered by the sail. Copy of a sarcophagus from the late 3rd century, Museum für Antike Schifffahrt , Mainz.

A Steinhuder peat barge with a spritsail

The Sprietsegel is the oldest Schratsegel in sailing shipping. It can be seen since the 2nd century BC. On smaller Hellenistic vessels with a focus on the northern Aegean ; During the imperial period , its western area of ​​distribution extended to at least Rome . The grave reliefs of ancient sailors show coastal vehicles, harbor boats and tugboats with a mast set up far forward in the bow , to which the rectangular canvas stretched by the diagonal spar is loosely attached.

Modern types of ships on which spritsail were used were, in addition to many fishing boats, the sea-going quases and the bojer .

Smaller work and transport ships on inland waterways also had a spray rig , in which the spray sail represents the main or mainsail . Some traditional boat types of this type are still in use today, such as the Steinhuder peat barge and the Blekinge boats that are common in southern Sweden . An example of the use of spritsail sails on larger inland vessels can be found in the fleet of the German Maritime Museum with the Emma barge with a three-masted spritsail rigging .

The spritsail is used today in different parts of the world. In western countries it is still used today on smaller dinghies and sport dinghies , especially the Optimist (Opti). The case with which the tension on the sail is also adjusted in the Optimist is called Sprietfall .