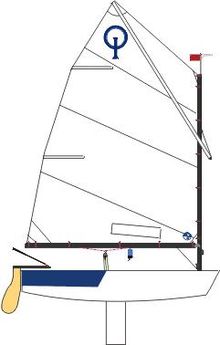 The Optimisten dinghy (often called Opti for short ) is a small and light dinghy for children and young people up to around 15 years of age. The sailing boat , which is distributed worldwide in large numbers, carries only one sail and, in addition to recreational purposes, serves as an entry-level class for regattas . 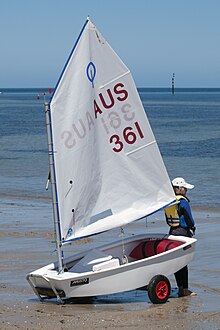 The single-handed sailing dinghy was designed by the American designer and boat builder Clark Mills . Together with his friend and club mate Major Clifford McKay, the idea for a simple, inexpensive children's boat, easy to build and easy to sail, arose in autumn 1947. A boat that a father and son could build in a garage. Based on the soap boxes that children loved at the time, Clark Mills created a box-shaped pram hull, which he equipped with a small gaff sail. Mills used commercially available 8x4 foot plywood panels for the construction. You could build three optimists from four sheets of plywood. Construction costs were less than $ 50 in 1947 (this figure is around $ 571 today, adjusted for inflation). The blueprint was $ 2.50. Mills derived the name for the design Optimist from his local clubhouse Club Optimist of the Sailing Club Clearwater in Florida.

In early 1948 the first Optimist was finished. Major Clifford McKay's son was the first to test Clark Mills' new dinghy design in Clearwater Bay. With a wind of around 20 knots ( corresponds to wind force 5 ), the boat proved to be extremely stable and easy to handle for a child. In a few years, the boat from Florida spread over the entire US east coast.

The Danish architect Axel Damgaard saw the dinghy during a sailing trip on Florida's coasts and brought the construction plan with him to Denmark. Back home, he motivated a handful of colleagues from his yacht club to recreate a few copies of the optimist based on Clark Mill's cracks. He provided them with today's standard rig . In 1954, the first optimist sailed in European waters in Vordingborg on the Smalands fairway . In 1957 Damgaard found a powerful mentor: Paul Elvstrøm , already a legend back then as a three-time gold medalist, was enthusiastic about the child-friendly concept of the boat and was committed to hosting a Danish championship.

In a true triumphal procession, the optimist conquered the Old Continent through Scandinavia, England and France. In 1962 the first world championship took place in southern England, and in 1965 the "International Optimist Dinghy Association" was founded as part of the world championship in Finland. In early 1970, children in Asia, Africa and South America also sailed with the Optimist, which was finally recognized as an international class in 1972.

As a simple chine -Boot an optimist has a hull of plywood or fiberglass reinforced plastic (GRP) with means sword and a cat-Rigg : the mast , the non meet , it is the only sail a Sprietsegel provided with a spar , driven is spread apart from the mast .

The hull of the Optimist is shaped like a pram and carries a circumferential gunwale . It was originally made from five plywood boards. Clark Mills developed this shape in search of the largest possible fuselage that could be made from two standard 4x8 foot plywood boards . Immediately in front of a bulkhead , which divides the hull into two roughly equal halves, is the sword case for a plug-in sword . A ratchet block for the sheet is attached to the center line of the bottom of the hull exactly behind it . A dike on the bow supports the mast, which runs through a hole in its center on the mast track. The suspension line is usually attached to the mast track.

Lateral floats in the front half of the fuselage and at the stern also give the capsized fuselage buoyancy. Riding straps on the ground and a boom on the tiller allow the skipper to optimize the trim by riding out .

Today most optimists are made of GRP , but wooden boats are still available. Some inexpensive club boats are made of thermoplastic material , but are not well suited for regattas because they are much heavier than GRP and wooden boats. The wall thickness of the hull stiffened by the bulkhead and Ducht is usually around five millimeters. The cockpit of wooden boats is often provided with a grating .

The boat can be easily transported on the roof of a car . Because of its easy handling, the Optimist is also suitable for small club tours. Common are boat trailers with up to twelve Optimists who are traveling for all club teams.

The Optimist is very easy to use and serves children as one of the entry-level classes in sailing and regatta sports. It is an international puppy boat class and one of the most frequently built class boats in the world. The international class association is the International Optimist Dinghy Association (IODA) based in Great Britain ; it includes well over a hundred national class associations. Since anyone can build a boat according to class rules (blueprints and building instructions are available) and shipyards also manufacture the boat on all continents, the question of its distribution is not easy to clarify. IODA has been issuing construction numbers since 1974; 132,000 badges are currently distributed.

The Optiliga is a series of training races especially for children who have little or no experience in regatta sailing. The focus is less on the performance concept, but rather on the solid acquisition of the basics of regatta sport.

The Optiliga follows in Germany due to the number of sailors the start in the so-called B group. There, depending on the position, the sailor can earn scoring points that are entered in a youth sailor pass . In the B regattas, athletes receive four points for a place in the first quarter, two points in the second quarter and one point in the passport in the second half. If you have collected 20 points in the sailing pass, you can start in the A group. If the sailor has achieved 30 points or more in the year in which he turns 13, he must change within eight weeks. A return to group B is not possible.

Tina Lutz from the Chiemsee Yacht Club (CYC) won the first world title for Germany in the Optimist category in 2005 in Switzerland . Julian Autenrieth , who started for the Bavarian Yacht Club (BYC) in Starnberg, won the title at the 2006 World Cup in Uruguay . In mid-2007 Julian had the opportunity to defend the title, which so far only nine Opti sailors have managed, but narrowly missed the target and finished fourth. Paulina Rothlauf (BYC) won the girls' title at the 2008 European Championships in Riva del Garda / Italy.

The ice ass regatta , which takes place every December in Lübeck, has a high entertainment value . Until 2018, optimists will only be sailed by adult men with a minimum age of 25 years. In 2019, the age of participation was reduced to 21 years and women are also allowed to participate.