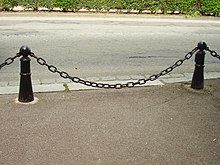 A slack chain forms a chain line or catenoids .

A chain line (also rope curve , catenoide or chain curve , English catenary or funicular curve ) is a mathematical curve that describes the slack of a chain suspended at its ends under the influence of gravity . It is an elementary mathematical function, the hyperbolic cosine , or cosh for short .

The calculation of the chain line is a classic problem of the calculus of variations . Imagine a rope of a certain size and length that is suspended at its ends. The rope curve is the result of the smallest possible potential energy of the rope. One tries to understand this mathematically.

For this one needs the mathematical expression for the potential energy. It is a refinement of the well-known “weight times height” . The refinement consists in that the energy for "all parts" of the rope is evaluated separately and added up at the end. This is necessary because the parts of the rope are at different heights. The mental division of the rope into smaller and smaller parts turns the sum into an integral. The height from is replaced by the function you are looking for, the mass by the mass of the piece of rope over the interval ; according to Pythagoras this is:

where the mass is per meter. If the rope is hung up at the points , the energy (“weight times height”) results as

A similar consideration leads to the expression for the length of the rope:

The energy must be minimized, but the length is specified. You bring this under one roof with a Lagrange multiplier , that is, you minimize the expression

The solutions to the equation are the functions

The concrete form which takes the rope ultimately be calculated by , and adapts that the curve passes through the suspension points and the predetermined length has.

Determinants of the chain line

As an example, a rope of the length suspended between two posts (distance ) is given (see illustration ). The posts are the same height and are located at and , so it applies .

To calculate the radius of curvature , we write the rope length as a function of :

This relationship clearly defines depending on and . Since it is not possible to give a closed expression for , the value must be calculated approximately using a numerical method for solving nonlinear equations.

Finally, one reads the condition from the figure from which one obtains. The relationships also apply

where the "slack" is.

The potential energy of this system is

More precisely, this is the energy difference compared to the case where the rope is completely at the same height as the suspension points ( ).

with . The same formula can be applied to sections of the rope. Since the sections all have the same radius of curvature , but the sag is negligible for small sections (down in the valley) , there is tension in the rope in the valley of the rope .

If you put the posts close together, the slack dominates , which is then exactly half the pitch. As expected, the force is then half the weight of the rope (note that two suspension points share the load).

In everyday life the factor is around 2 to 4. The whole or double the weight of the rope then acts at the suspension point.

Relationships with other functions

In 1639 Joachim Junge proved that the chain line is not a parabola . Gottfried Leibniz , Christiaan Huygens and Johann I Bernoulli found out in 1690/91 how the chain curve should be formed. The parabola occurs with a line load evenly distributed over the span x , e.g. B. a suspension bridge in which the weight of the ropes can be neglected compared to that of the roadway. The figure on the right compares the curve of a chain line (red) with a normal parabola (green).

By rotation of the chain line about the x generated axis rotation surface is used as a catenoid referred to and is a minimal surface .

The chain line is the evolution to the Traktrix (drag curve).

If about 20.2% of the total width , the sag is equal to the width (square overall dimensions). This is the case, for example, with the Gateway Arch (see below in the Architecture section ), which is 630 feet wide and just as high. The exact formula

An analog of the catenary support line followed by the shear forces free sheet :