The title of this article is ambiguous. Further meanings are listed under Robert Burns (disambiguation) . 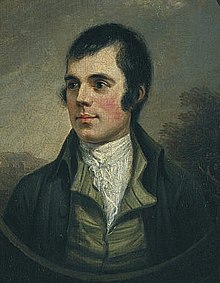 Robert Burns (detail from an oil painting by Alexander Nasmyth , 1787)

Robert Burns (born January 25, 1759 in Alloway , Ayrshire , † July 21, 1796 in Dumfries , Dumfriesshire ) was a Scottish poet . He wrote numerous poems, political texts and songs. His most famous song is Auld Lang Syne , which has now become part of the British tradition. Burns, who also wrote works in his native dialect Scots , is considered, alongside Walter Scott , a Scottish national poet . To this day, he is held in high esteem in his homeland , for example during the annual Burns Supper (also called Burns Night ) on January 25th.

Robert Burns came from a humble background. The eldest son of the gardener and farmer William Burns and his wife Agnes Broun had six siblings. He was a cousin of the explorer Alexander Burnes . Although Robert Burns was only the son of a simple farmer and farmer, he received a very good education at the endeavor of his father. Burns learned the history and stories of his homeland from his mother: traditional fairy tales and legends.

Already in his childhood he contracted a heart defect as a result of too heavy physical work and inadequate nutrition .

Burns attended Grammar School in Ayr from the age of seven . School books were the Bible and A collection of prose and verse from the best English authors ( Arthur Masson ), of which Joseph Addison, among others, particularly impressed him. The biographies of Hannibal and Sir William Wallace were also among the young Burns' reading material.

In the fall of 1765, Burns' parents leased the Mount Oliphant estate near Alloway. Since there was no school in the vicinity, the father took over the upbringing of his children. He attached great importance to the natural sciences and also taught his sons the basics of Calvinism . Burns was later given a sparse visit to the Parish School of Dalrymple , where he said he was particularly enthusiastic about reading Samuel Richardson and Tobias Smollett .

From 1773 Burns was able to attend the Latin school in Ayr, where he learned French, Latin and mathematics together with his brother Gilbert. During these years he also discovered the literary work of Alexander Pope and William Shakespeare for himself. When he fell in love the following year, Burns began his first own lyrical attempts. According to his own statement, he created his first poem "... for a bewitched girl at harvest time".

At the age of 19, Burns switched to the Kirkoswald school in 1778 . In addition to attending school, he worked on his father's property, where he created commissioned poems for all sorts of occasions such as birthdays and weddings. When he fell passionately in love with a certain Peggy Thompson, she too became the subject of several poems.

This made him famous, he neglected his work on the farm. On November 11, 1780, Burns and friends founded the Tarbolton Bachelor's Club . The founding location of what is probably the oldest Scottish debating club was John Richard's pub (see Burns Bachelors' Club ). Besides political issues such as Theory of Moral Sentiments by Adam Smith also were Bible interpretations and literary publications discussed.

After a dispute with his father, Burns left his father's business in 1781 and tried to earn a living in the flax processing industry . He worked with a weaver in Irvine . When the house and workshop burned down in an accident, Burns went bankrupt because he was unable to counter the economic crisis at the end of 1781. During this time Burns read mainly works by the Enlightenmentists John Locke and Pierre Bayle , but they were less than hoped for.

When Burns' father died on May 22, 1784, he and his brother Gilbert took over a small farm in Mossgiel near Mauchline . A lack of economic success and several bad harvests reinforced Burns in his decision to emigrate. He was in the process of accepting a job as manager of a plantation in Jamaica when his debut as a poet was received with enthusiasm by both audiences and literary criticism.

The small anthology of his own poems, which he had printed on subscription in Edinburgh , brought him a net profit of £ 20 . In these poems he sang again and again about Mary Campbell , a milkmaid from the nearby Montgomery Castle . He dedicated some of his songs to her. Soon after her untimely death, Burns had a relationship with Jean Armor , whom he also wanted to marry. As a strict adherent of Calvinism , their father, Jack Armor, forbade this connection.

Life as a famous poet

In mid-1784 Burns went to Edinburgh and stayed there for over a year. Burns was admired and adored in the salons and societies and was able to make contacts, which later facilitated further publications. One of his most important volumes of poetry was his Poems chiefly in the Scottish dialect , which appeared in 1786. It is probably his most important work.

On May 22, 1785, the maid Elizabeth Paton Burns gave birth to daughter Elizabeth . Burns refused to marry Paton, so she married servant John Andrew three years later. Burns reported this story in his poem The Fornicator , which was not published during his lifetime.

He then returned to the highlands while mourning Jean, who had given birth to twins. The relationship between the two was no longer rejected by their father. In 1789 Burns leased a property near Dumfries called Ellisland Farm , which was, however, in an unfinished state; in addition, frequent visits and the associated distractions took up a lot of his weight, and so it happened that after only 3½ years he had to give up the lease at great loss and look for another position.

Through the mediation of James, Earl of Glencairn , Burns received the post of tax overseer, which brought him £ 70 a year, but did not appeal to his inclination. Even so, Burns wrote many songs and political essays in the daily newspapers during these years.

Burns was so enthusiastic about the events of the French Revolution that one saw him as a Jacobin . This attitude cost Burns many of his friends and all of his patrons, as he was also considered a supporter of the House of Stuart .

Burns often fell ill due to his unsteady lifestyle and health problems in his childhood. The frequent consumption of alcohol increasingly prevented him from doing his literary work. A spa stay in a neighboring seaside resort after a serious illness no longer brought the desired recovery. At the age of 37, Robert Burns died on July 21, 1796 in Dumfries (Dumfriesshire) of an infection, which had probably occurred as a complication after a tooth extraction. He found his final resting place in the graveyard of St Michael's Church in Dumfries. His burial place, Burns' Mausoleum , is in the eastern part of the surrounding cemetery. In his last home, where he also died, the Robert Burns' House is now a museum.

Farewell to the Brethren of St. James Lodge, Tarbolton and The Freemasons' Apron are particularly emphasized as Masonic works .

In all of his literary work there are self-perceived and self-experienced things; his poems alternately reflect his joys and his pains, his hopes as a child, his love inclinations as a youth, his loyal attachment to the highlands and to freedom, his dreams and his discomfort with social constraints. He exerted a great influence not only on English but also on European literature: George Gordon Byron , Thomas Moore , Walter Scott , Percy Bysshe Shelley and the sea ​​school all saw Burns as a role model.

Ferdinand Freiligrath wrote his poem Despite All this in 1848 as an adaptation of Burns ' poem A Man's a Man for A' That . Freiligrath was again edited in 1976 by the singer Hannes Wader . Many folk and folk rock bands of the 1960s and 1970s interpreted Burns' poems and songs, for example Steeleye Span ( Rogues in a Nation , John Barleycorn ), Tri Yann ( Ye Jacobites By Name ) or Jethro Tull (One brown mouse).

Burns also excelled in prose through letters and small political writings. The song he wrote, Auld Lang Syne , is famous , which is traditionally sung at the turn of the year to commemorate those who died last year. With The Banks O'Doon the text is another Scottish folk song Burns.

James Currie (1756-1805) published a work edition by Burns in 1800 to support his widow and children. Since this collection seemed incomplete to many, Robert H. Cromek (1770–1812) published his Reliques of Robert Burns in 1808 . Burns soon found readership in Germany too. Karl Bartsch , Heinrich Julius Heintze (1811–1860), Philipp Kaufmann , Adolf Laun and Georg Pertz were the first to translate Burns' works into German.

The book The Catcher in the Rye (1951; original title The Catcher in the Rye) by Jerome David Salinger quotes a line from the poem Comin 'Thro' the Rye by Burns "When / If a body meet a body coming through the rye" (" Somebody meets somebody who comes running through the rye "). In the memory of the protagonist, Holden Caulfield , the “meet” becomes “catch”. Burns love poem, the content of which is quite frivolous, is misinterpreted by Holden Caulfield, because he derives from it the idea of ​​children playing in a rye field, which he would have before falling from an adjacent cliff and thus before losing their innocence and falling into Growing up must preserve. 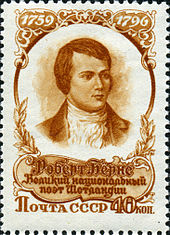 The text of the poem Address to the Haggis can be read in the article Burns Supper .