The title of this article is ambiguous. Further meanings are listed under William Wallace (disambiguation) . 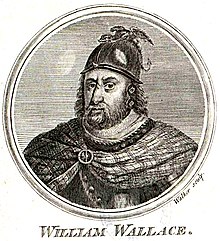 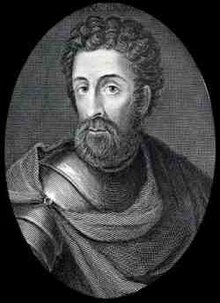 Wallace's date of birth and his place of birth are not clearly established. Wallace is believed to have been born between 1270 and 1280. In a 16th century history work, History of William Wallace and Scottish Affairs , the year of birth is given as 1276. There are also various statements about the place of birth, traditionally Elderslie near Johnstone in Renfrewshire , alternatively its origin is claimed from Ellerslie in Ayrshire . Against Ellerslie it is argued that it is only mentioned in the 19th century (as a mining settlement), while Elderslie was mentioned much earlier. What is certain is that his first battle took place within 30 miles of both settlements.

The historian Norman Davies considers it possible that he comes from a Cumbrian family of the former Kingdom of Strathclyde , since his last name Wallace ( Uallas ) means "Welsh". The determination of the name of his father is also not clear, he is handed down as Malcolm Wallace, but the knight David Wallace from the entourage of James Steward , who came from Riccarton near Galston in Ayrshire, recently confirmed by a seal find, is also available . With the derivation from the latter, the version of the origin from Ellerslie is also supported.

There is no further evidence for his person. Blind Harry invented a youth story for his epic work The Wallace in the late 15th century , which should explain the development of Williams to the Scottish freedom fighter. According to Harry, Wallace spent some time in his youth with his uncle Argheim, a cleric , at Cambuskenneth Abbey, near Stirling , where he learned to read and write.

Wallace's height is speculated in contemporary sources. According to Bower , he was six feet tall . 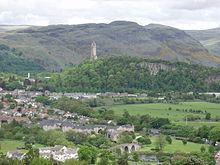 View from Stirling Castle towards the city and the Wallace Monument

William Wallace was one of the leaders of the resistance against Edward I of England ( Edward Longshanks ), who claimed supremacy over Scotland and had forced the Scottish King John de Balliol to abdicate in 1296. Together with Andrew De Moray, Wallace inflicted a crushing defeat on the English troops under John de Warenne on September 11, 1297 at the Battle of Stirling Bridge , but Murray was seriously wounded. As a result, the two now expelled the remains of the English administration from Scotland and were proclaimed by the Scottish nobility as Guardians of the Realm to regents of Scotland in the name of King John Balliol, who was in English captivity. Wallace was also in Selkirk to beat Knight . Wallace even carried out a raid, possibly with Malise, Earl of Strathearn , through the English counties of Northumberland and Cumberland . From this time, namely October 11, 1297, comes the only surviving document that goes back to William Wallace and Andrew Murray as exhibitors and with which they promised the Hanseatic cities of Hamburg and Lübeck free traffic with all Scottish ports. It is kept in the archive of the Hanseatic City of Lübeck . On July 22nd, 1298 he was defeated by Edward I in the Battle of Falkirk . As a consequence of the defeat, Wallace resigned from his position as Guardian and stayed temporarily in France . He was succeeded as Guardians by Robert the Bruce, 4th Earl of Carrick , and John III. Comyn , nephew of John Balliol.

This plaque was placed on the site of his execution

Sir William Wallace was betrayed for a heavy reward by Sir John de Menteith, lord of Dumbarton Castle . Wallace was captured on August 5, 1305 in Robroyston near Glasgow . Shortly thereafter, he was tied to a horse and taken to London on a two-week trip. There he was charged with high treason and sentenced to death by hanging, disembowelling and quartering . This was the standard punishment for treason of the king in Britain until the early 19th century. The execution took place on August 23, 1305. According to a chronicler, he was tied to a horse and strolled naked through the streets of London for several hours while residents pelted him with stones.

Wallace was then hanged almost to death, then castrated and gutted while still alive - the removed body parts and innards were burned in front of the convict and onlookers. According to legend, he is said to have shouted to his tormentors under torture that he was Scotch and did not recognize Longshanks as his king before he finally succumbed to his torments. Also passed down as a legend are the words: “You English dogs, you are effeminate whores, you kiss my Scottish bum and you are proud to be able to do this, nothing better can happen to a miserable Englishman!” Wallace's body was dismembered: his Arms and legs were sent to Newcastle , Berwick-upon-Tweed , Stirling and Perth as a deterrent . His head was impaled on London Bridge .

A plaque at St Bartholomew's Hospital in Smithfield commemorates the place of his execution. 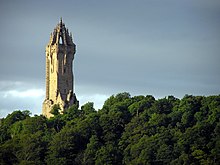 The Wallace Monument is a 67 meter high tower that was erected near Stirling in 1869 to commemorate the Scottish national hero. The monument is now a major tourist attraction. There you can also see the sword that William Wallace is said to have wielded. According to legend, he is said to have killed 50 mounted soldiers in a row with this sword.

Patriotic Scots, on the other hand, worship folk heroes and martyrs in more contemplative places, such as the Caledonian Temple of Fame above Dryburgh / Scottish Borders .