This article needs to be revised: The article deals in large parts with the history of the technical reconnaissance of the BND and its predecessor OG. This does not fit the lemma. Much of the information is without evidence. For this purpose, further alleged branch offices of the BND are listed, which were disguised by other names - Asperatus ( discussion ) 12:10, 21 Oct. 2019 (CEST)
Please help to improve it and then remove this marking. 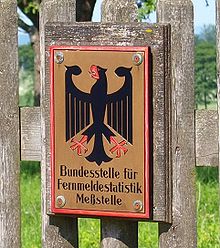 BND property on Speckweg in Butzbach

The Federal Agency for Telecommunications Statistics ( BFSt ) was a code name for branch offices of the Federal Intelligence Service (BND) until 2014 . The branch offices belong to the Technical Reconnaissance Department (TA), formerly Department II.

The designation should suggest the position as a federal authority . This has also been officially confirmed. The seat of the fictitious federal authority is said to have been Stockdorf , municipality of Gauting , in the district of Starnberg .

The telecommunications and electronic reconnaissance of the Federal Intelligence Service began with its organizational predecessor, the Organization Gehlen (OG). In 1947, the Gehlen Organization's first shortwave listening station was set up in Kransberg Castle near Bad Nauheim . In addition to this, the first "Horch control center" with 50 employees went into operation in nearby Butzbach . During this time, other former employees from the area of ​​the former intelligence services " Abwehr " and Research Office of the Air Force only met Organization Gehlen. After Colonel a. D. Leo Hepp had taken over the management of the listening recording, Gehlen expanded the order. As part of the gathering of news about the Berlin blockade , the first recording in the VHF / UHF area of ​​the 24th Soviet Front Air Army (24th FLA) was carried out by the Gehlen Organization from the Hohe Meißner . It quickly became necessary for the Gehlen organization to set up additional direction finding and listening points for short-wave recording in Germany as a result of the expansion of recording activities.

In 1954 the Gehlen organization began using British technology from the time of the Second World War for the first time with mobile radio measurement recording, especially of radar signals on the border with the German Democratic Republic .

After joining NATO and the establishment of the Bundeswehr , parts of telecommunications and electronic reconnaissance were transferred to the Federal Ministry of Defense as part of the military intelligence system . The question arose of the distribution of competencies in technical reconnaissance between the Bundeswehr, founded on November 12, 1955, and the Federal Intelligence Service, established on April 1, 1956.

At this time, the "listening point A" of the Gehlen organization was set up in Kransberg . The radio evaluation was later moved from Oberursel to Kransberg. Then this registration point was moved to Butzbach . In Butzbach there had been a command post for "Listening Station A" Kransberg since around 1948. In the meantime, the code name "Federal Office for Telecommunications Statistics" (BFSt) has been used.

"Listening point B" was set up in Berlin-Tempelhof from 1950 with American approval . She later moved to a French property in Reinickendorf in the French sector of Berlin. As early as 1948, Kransberg apparently carried out the test collection operation on the Hoher Meißner. The VHF / UHF radio communications of the Soviet air forces in the Soviet occupation zone could be monitored much more effectively from there. This was interesting against the political background of the Allied airlift to Berlin that followed.

In the course of 2011, the messaging service checked nearly 2.9 million emails and SMS . After evaluating the search, there were “intelligence-relevant material” in 290 cases. This corresponded to a "success rate of 0.01 percent". Vice-government spokesman Georg Streiter announced that “only a limited part of international telecommunications is subject to surveillance by the Federal Intelligence Service. The numbers are declining. In 2010, the intelligence service recorded around 38 million 'telecommunications traffic', and in 2011 less than three million. "

The following non-exhaustive list shows branch offices of the Federal Intelligence Service that were disguised as the Federal Office for Telecommunications Statistics: