Kerch (Ukrainian Керч ; Russian Керчь ; Crimean Tatar Keriç ) is a port city on the Kerch peninsula of the same name with 144,500 inhabitants (2013).

Kerch is located on the Kerch peninsula named after the city, which in turn forms the eastern end of the Crimean peninsula .

From here there is a constant ferry connection across the Kerch Strait to the Taman peninsula opposite to the port of Kawkas ( Russia ), from which there is a bus connection to Novorossiysk , about 150 km further south . The Crimean Bridge opened in 2018. 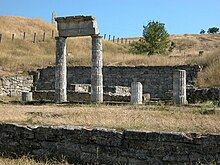 Ruins of the Acropolis of Pantikapaion

In the place of the city of Kerch was the ancient Pantikapaion , a Greek colonial city that was built in the seventh century BC. Was founded from Miletus and was later the seat of the kings of the Bosporan Empire . It was destroyed by the Huns in the fourth century AD . In the sixth century, the Byzantine fortress Bosphorus was built here. The Byzantine cavalry bowl found near the city in 1891 shows Emperor Constantius II as a triumphant on horseback.

Part of the Ottoman fortress Jenikal

After the Khazars -Herrschaft in the seventh century, when the town Karscha or Tscharscha called ( "the market"), she came in the tenth century as Kortschew under the control of the Kievan Rus , from 1239 under the Tatars -Herrschaft and then under the Golden Horde . For a time, the trading power of the Venetians and Genoese ruled over the city they called Vosporo , Bosporo or Cerkio . In 1340 Toloktomur, the then emir of Solgat (Crimea), offered the Venetians the city of Vosporo with its port and an associated area, so that they would be just as complete masters of it as the Genoese in Caffa .

It is not known when Kerch came to the Genoese. The earliest mention of a Genoese consulate in Kerch dates back to 1456. In the 15th century, Kerch belonged to the Crimean Khanate , and in 1475 the city, like all of Crimea, came under the influence of the Ottoman Empire . In 1774 Kerch and the Jeni-Kale fortress were annexed to the Russian Empire .

In 1821 Genoa-born Raffaele Scassi, businessman and friend of Grand Duke Michael Pavlovich Romanov , brother of Tsar I Alexander , received permission to build the port of Kerch , was appointed governor of the port, a loan of 200 thousand rubles and a ten-year loan Tax exemption on imported and exported goods to and from the Caucasus . The port was opened in December 1822.

In 1835 there was a " lovers' theater in Kerch , where the ladies and the local officials provide pleasant entertainment for the public through their successful game", and on October 18, 1835 "the city library and casino were opened with a feast." The first scheduled excavations in Kerch began in the 1830s . The place is named for the Kerch style , a characteristic ceramic style from Athens , which was especially exported to the Greek colonies on the Black Sea.

During the Crimean War , Kerch was destroyed by the British in 1855 as it played an important role in accessing the Sea of ​​Azov , through which the Russians organized supplies to the Crimean Peninsula.

During the Second World War , Kerch was hotly contested. The city was conquered by the Wehrmacht for the first time after stiff resistance in November 1941 . On November 27, the local command office reported in its activity report to the commandant of the rear army area 553: "The liquidation of the Jews will be carried out more quickly because of the endangered food situation in the city." November to report on the hay market. From there they were transported by Sonderkommando 10b of Einsatzgruppe D of the security police and SD to the nearby village of Bagerowo , where they were shot in a tank ditch . Around 2500 Jews were murdered in this way from December 1st to 3rd.

On December 30th, when the Red Army landed at Sea, Kerch became a Soviet bridgehead . In May 1942, Kerch was captured again by the Wehrmacht, with an estimated 28,000 Soviet soldiers killed and 160,000 captured ( Operation Bustard Hunt ). Members of the Feldgendarmerie and Sonderkommando 10b tracked down surviving Jews who were then shot by the SD .

Around 10,000 non-evacuated Soviet soldiers, together with parts of the population, continued to offer bitter resistance in a mine (today's catacombs) until they were destroyed in October 1942 ( siege of the Adschimuschkai quarries ). On October 31, 1943, another Soviet sea landing failed. During the German occupation, 15,000 residents were killed and another 14,000 deported. These events were also used as evidence in the Nuremberg Trial . The largely destroyed city was liberated by the Red Army on April 11, 1944.

After the war, Kerch did not receive the status of a hero city and thus no central construction aid. Therefore, the city had to finance the reconstruction from its own resources. It was not until 1973 that Kerch was declared a city of heroes. The Kerch tram, which opened in 1935, was also destroyed in the course of the war in 1941 and not rebuilt. Since 1971, the city was connected to the North Crimean Canal , which supplied the Crimea with water from the Dnieper . This canal was separated by a dam after the annexation of Crimea by Russia , so that no water has been flowing from the Dnepr to the Crimea since 2014. In the meantime Kerch receives water a. a. from the Kerchensk reservoir west of the city.

At least 20 people were killed and 40 others injured in a rampage at a school on October 17, 2018. According to media reports, an 18-year-old student is said to have shot at least 19 people and then killed himself because of “hatred of the teachers”.

In two waves of emigration (1820 and 1870) fishermen, merchants, captains, shipbuilders and farmers from Liguria , Campania and the Apulian cities of Trani , Bisceglie and Molfetta came to Kerch, soon followed by notaries, doctors, engineers, architects and artists.

Composition of the population according to the 2001 census: 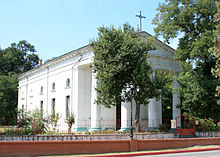 Catholic Church of the Assumption of Mary in Kerch

Urban-type cities and settlements in the Autonomous Republic of Crimea

Rajons and independent cities in the Autonomous Republic of Crimea