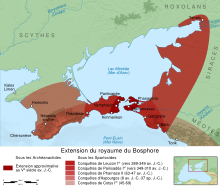 Expansion of the Bosporan Empire

Ancient Greek colonies on the north coast of the Black Sea

The Bosporan Empire ( Regnum Bospori ) was an ancient Hellenistic kingdom on both sides of the Cimmerian Bosporus , which developed in the 5th century BC. From the Greek colonies in the northern Black Sea region and on the coasts of the Sea of Azov .

After a phase of economic and related military decline in the 3rd century BC. The empire became around 107 BC. Annexed by the kingdom of Pontus . After the incorporation of Pontus into the Roman Empire by Pompey , the Bosporan Empire was a state dependent on Rome. In the 1st and 2nd centuries AD, the empire regained its strength under the rule of a Sarmatic dynasty, but was often subjected to attacks by neighboring tribes. The kingdom was destroyed by the Goths and the Huns during the Great Migration in the 4th and 5th centuries .

Origin of the empire and rule of the Archaianaktiden

The nucleus around which the Bosporan Empire arose was formed by the Greek poleis on both sides of the Kerch Strait . In ancient times this was called the Cimmerian Bosporus, in contrast to the Thracian Bosporus. In the eighties of the fifth century BC These Poleis were unified by the Archaianaktiden - a noble family that probably originally came from Miletus or Mytilene - from the city of Pantikapaion . The Archaianaktiden probably held the power functions as hereditary archons , whereby at least the external characteristics of a democratic state structure were preserved. In inheriting this power, however, they broke decisively with the traditions of Hellenic democracy and favored the development of the state structure of a polis into that of a monarchy.

The agreement, which also encompassed several native tribes, was also made for strategic and economic reasons. Only in this way could the advance of the barbarian tribes be stopped and the grain trade given a stable form of organization.

After the fall of the Archaic Actids in 438 BC According to Diodorus, the empire was under the rule of the Thracian Spartocids , who were to rule for more than three hundred years. The circumstances that led to the change of dynasty are unknown. The names of the founder of the dynasty - Spartokos - and some of his successors are Thracian and increasingly express the Greeks' interest in the Black Sea region. This is also documented by the sometimes quite frequent mention of the cities. The Spartocids and especially Satyros I , Leukon I (389 / 8–349 / 8) and his son Pairisades I (349 / 8–311 / 10) - supported by a large army of mercenaries - were able to expand the borders of the empire.

The war between Sindike, Heraclea Pontica and the Bosporan Empire

The Bosphoran Empire was bounded in the east by the Kingdom of Sindike, which lay between Lake Maeotis (Lake Azov) and the Kuban River, which corresponds roughly to the Kuban Oblast . Satyros I, the reigning king of the empire, had won the city of Panagoria in 389 by bribing a Greek official and was now besieging the city of Theodosia, which (under a different name) probably belonged to the Sindike kingdom.

He accused the Queen of Sindike Tirgatao to have attacked his kingdom and to have killed his son Metrodorus . In order to keep the peace, King Hekataios of Sindike married the daughter of Satyros I and expelled his wife Tirgatao, a princess of the Maeotes (Greek Maiōtai or Maliōtai (Μαλιῶται)) from Ixomatae (the land of the Ixones), whom he locked in a tower . When Satyros I died at the age of 81, his sons Gorgippus and Leukon I took over the kingdom. In the meantime, King Hekataios was overthrown by his son Oktamasades , who freed his mother Tirgatao and made himself king of Sindike. He could rely on help from Heraclea Pontica, Memnon of Rhodes and the Sarmatians. Memnon was a Spartan mercenary and governor of Rhodes who served the Persian king Darius. He came to the aid of the Oktamasades with 40 thongs and 200 hoplites.

Around 380 BC With this force, Oktamasades attacked the city of Labrytai, which was believed to have become a vassal of Leukon I. This led to the battle of Labrytai (Greek: Μάχη του Λαμπράι), in which Leukon I was able to conquer the capital Sinda (now Anapa ) and drive Oktamasades into the steppe. Tirgatao escaped to Ixomatae and married her father's successor, an unknown king of the Maeotes who ruled the Maeotes below the Kuban. From this point on, his brother Gorgippos ruled the eastern part of the empire, renamed Sinda to Gorgippa and made it his seat of rulers. This suggests that Persia lost its influence on the North Caucasus during this time to the Greeks, who imported numerous goods from this area during this time. However, the Athenian Demosthenes later described the Spartocids as cruel tyrants.

Tirgatao is identified with a princess Tirgutawiya of Ixomatae, who was found on a Luwian-language badly destroyed tablet in Alalach , what was then Persian territory.

20 years after the death of his father, Leukon I besieged 365 BC. Theodosia again, but had to break off the siege and withdrew to Panticapaeum after Heraclea Pontica (Greek Ἡράκλεια Ποντική Hērakleia Pontikē in Bythinia, today Karadeniz Ereğli ) sent his strategist Tynnichos to help the city. 5 years later 360 BC Leukon I made another attempt when the Herakleotes were withdrawn because the tyrant Clearchus (c. 364–353 BC) usurped control of Heraclea Pontica. So Leukon I was able to conquer the city of Theodosia and probably renamed it Theodosia after his Greek wife.

310/309 BC Another major civil war broke out between the heirs of Paerisades I, a son of Leukon I. The aspirant to the throne Eumelus allied himself with the Siraks under their leader Aripharnes, an increasingly Hellenized Sarmatian tribe and former ally of Sindike. His brother Satyrus II, on the other hand, allied with the Scythians under Meniscus and recruited some Thracian and Greek mercenaries. The two warring parties met on the Thatis River (ev. The Kuban River), with Eumelus attacking his brother Satyrus II with 42,000 warriors, who is said to have defeated him with 34,000 soldiers.

Then Satyrus II attacked the capital of the Siraks in Siracene, where Satyros II died. Meniscus brought the dead body to his younger brother Prytanis to Gargaza, who then went to Panticapaeum to declare himself king. Meanwhile, Eumelus and Aripharnes took the city of Gargaza. In the winter of 309 BC Prytanis I set out from Panticapaeum and placed his brother Eumelus at Lake Maeotis (Lake Azov). However, he was quickly cornered by the isthmus and fell. Eumelus became king and the Greek historians referred to it as the king of the Cimmerians . Presumably they were referring to the Kimmrian Bosborus and not to the tribe of the Kimmerer. The Greeks' interest in the region flagged, although the Diadoch Wars certainly played a role.

Parts of the war were handed down through Hellanicus of Lesbos, Strabo, Demosthenes, Memnon of Heraclea and Polyaenus as well as Siculus Diodorus, which were probably the main sources. The work of Memnon of Heraclea has been lost and is roughly known only to later authors. At the end of the 3rd century BC The Greek sources dried up more and more until the Romans stepped in. They showed a particular interest in the equestrian skills and armor of the Sarmatians.

The main occupation of the non-Greek population was agriculture, animal husbandry, precious hides and fishing. The Bosporan cities were important production centers for famous, artistically made vessels made of clay and metal. Quite outstanding and the products of Bosphoran are chasers , jewelers and Toreuten . A part of the so-called Scythian gold was probably made here by Greek craftsmen. These cities had lively trade with Athens and other cities in Greece. The main items in the Bosporan export to Athens were cereals, salt fish, salted meat, slaves and the like. a. The Bosporan cities obtained fabrics, olive oil, wine, vessels, luxury items, household appliances, tools and weapons, books, medicines and the like from Athens. a.

The art of the Maeoten is very powerful and shows the influences of the Caucasus region, while the art in Sindike from the 2nd century BC onwards. Connections to Bactrian gold increasingly revealed. Both are combined in the Bosporan Empire with the Greek style and shaped the Sarmatic and Gothic styles for many centuries.

The decline and reign of the pontiers

The Mediterranean basin 218 BC Chr.

In the second half of the third century BC The economic weakening of the Bosporan Empire began, which also had an unfavorable effect on the military strength of the empire. The fight against the nomad raids became difficult. The Scythian danger for the existence of the empire became so great that Pairisades V (approx. 125 BC - approx. 108 BC) renounced his throne and the power of Mithridates VI. offered by Pontus . This surrender policy of the last Spartocids provoked an uprising in the lower classes, including numerous slaves who made common cause with the Scythians. At the head of this popular movement was the Scythian population of Pantikapaion under the leadership of the slave Saumakos (Sawmak). Pairisades was killed by the insurgents. The uprising was eventually put down by the troops of Mithridates, with the Bosporan state being incorporated into the Pontic Empire. 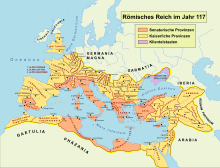 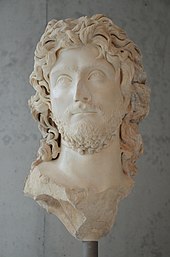 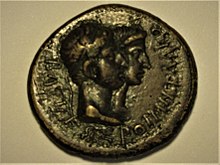 Rhoimetalkes I. and his wife Phytodoris on bronze coin

As the power of Mithridates VI. in 63 BC Was put to an end by the Romans, the empire became dependent on the Roman Empire. The empire did not flourish again until the 2nd and 3rd centuries AD. This economic boom is related to the strengthening of trade relations with Asia Minor and the Scythian tribes.

With the death of Sauromates II (210/11), who had triumphed over the Scythians and Sarmatians, the final decline of the empire began. The pillaging campaigns of Germanic tribes such as the Goths were particularly dangerous to him . During the time of the imperial crisis of the 3rd century , attackers (such as the Goths and the Borans ) also used the ships of the Bosporan Empire for incursions into the Roman Empire. Even so, the Bosporan Empire still existed at the beginning of the fourth century and even maintained relations with Rome, whose protectorate was still recognized by the Bosporan kings. An unmistakable sign of the economic collapse of the empire was the cessation of coinage under King Rheskuporis V in the thirties to forties of the fourth century, which the Bosporus had carried out almost without interruption for nine hundred years.

Apparently the Bosporan Empire had survived not only the invasion of the Goths, but also the storm of the Huns . This results from an inscription by a king named Douptounos, who was already a Christian and probably ruled in the 5th century. In the sixth century, the parts of the Crimea not settled by the Goths came under direct Byzantine rule. A kingship no longer existed at this point in time.