The strudelworms (Turbellaria) are a class of flatworms (Plathelminthes). The taxon comprises around 3000 recent species , all of which are found in the wild, predominantly in the oceans and freshwater, rarely on land.

In the history of the development of living things, the vortex worms are significantly higher than the cnidarians , as they already develop real tissues and organs and have a clear bilateral body symmetry. However, they are not monophyletic , but paraphyletic, because all free-living flatworms are counted among the vortex worms. Opposed to them are all the parasitic types of flatworms, which are grouped together as neodermata .

Common schematic overview of the gastro-vascular, nervous, and excretory systems of the Planaria 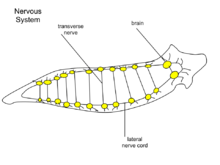 Schematic representation of the nervous system in the vortex worms (Turbellaria), also planarians

Schematic representation of the excretion system in the vortex worms (Turbellaria) 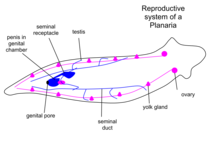 Schematic representation of the reproductive system in the vortex worms (Turbellaria)

The mouth opening of the vortex worms is on the ventral side. The ciliate, muscular pharynx can be pushed forward like a trunk. This tubular pharyngeal organ is everted out of the pharyngeal pocket and is used to capture the prey and to pre-digest larger prey with the help of enzymes. The pharynx pumps the food into the intestine, where it is further broken down enzymatically and absorbed and digested by nutrient cells through phagocytosis .

Like all flatworms, the vortex worms have no anus opening. The midgut, which ends blindly, can have one, three or many branches.

All members of this class are hermaphroditic ; H. an individual has both sexes. Nevertheless, they fertilize each other, and self-fertilization occurs only very rarely. Male and female genital orifices are either separate or both open into the common genital atrium. The development of marine species often takes place via the free-swimming stage of the ciliated Müller larva, which resembles the trochophora of the Annelida . In general, the development is mostly straightforward. However, some groups also reproduce asexually through division (e.g. Dugesia ).

The Turbellaria divide into several orders. They occur both in the sea and in fresh water.

A typical representative of the Turbellaria is the stream planarie ( Dugesia gonocephala ). This can also be found quite often in clean rivers in Europe. 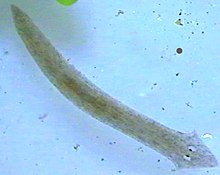 The planaria Dugesia tigrina and some other species of the genus Dugesia from the suborder Tricladida , order Seriata , are of particular importance for current research because they have an almost unique property: in their connective tissue they have countless stem cells everywhere , which in large and small injuries can develop new nerves, muscles, sensory organs or other tissues at any time. Even a small piece of worm retains its potential to become a whole animal. Because of this regenerative capacity , the planaria plays a central role in current regeneration research, and scientists have succeeded in systematically deciphering the gene function of the planarians. Since many genes found in planarians are also present in humans, despite the low relationship between planarians and humans , an understanding of the regeneration in planarians can also lead to information about how stem cells could be used in humans.

Planarians also have a long history in basic research on brain functions and memory. It was investigated which memory performance is retained during the regeneration of nerve cells.

The class of the vortex worms is free-living; the other classes of flatworms , the tapeworms (Cestoda), flukes (Trematoda) and hooked flukes (Monogenea) are grouped together as Neodermata .

The following diagram shows the probable relationships within the class of the vortex worms:

According to the cladistic system, the parasitic neodermata, which are classically not counted among the vortex worms, are classified in the rhabdocoela.