The title of this article is ambiguous. Further meanings are listed under Eva Braun (disambiguation) . 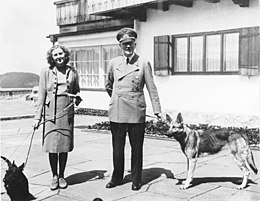 Eva Braun and Adolf Hitler at the Berghof am Obersalzberg , June 14, 1942

Eva Anna Paula Braun (born February 6, 1912 in Munich , † April 30, 1945 in Berlin when she was married to Eva Hitler on April 29, 1945 ) was, probably since 1932, the public lover of Adolf Hitler . Both married the day before their joint suicide in embattled Berlin, shortly before the unconditional surrender of the Wehrmacht in World War II . 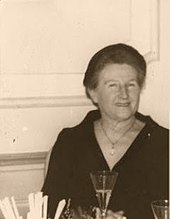 Eva Braun's parents, Friedrich (called “Fritz”, * 1879) and Franziska Katharina Braun (born Kronberger, * 1885), survived their daughter. They died on January 22, 1964 and January 13, 1976 in Ruhpolding ( Upper Bavaria ) and are buried there in the new mountain cemetery. His father was a trade graduate student and an art carpenter.

Eva Braun had two sisters, Ilse (1908–1979) and Margarete (1915–1987; called "Gretl"). Ilse was very skeptical about National Socialism . She stayed away from Hitler's surroundings as far as possible and rarely visited her sister on the Obersalzberg . Over the years she often reproached Eva for becoming more and more arrogant and superficial. Gretl was part of the permanent circle around Eva at the Berghof ; on June 3, 1944 she married the aspiring SS officer Hermann Fegelein (1906–1945), a liaison officer of Heinrich Himmler . Fegelein tried to flee in April 1945, but was captured. Since Hitler suspected him of being connected with Himmler's previous offer of surrender to the Allies , he had him shot on April 29, 1945 in the courtyard of the New Reich Chancellery . Even Eva couldn't stop the dictator. She initially stood up for her brother-in-law but ended her efforts when she discovered that Fegelein had stolen her jewels and cheated on his pregnant wife. At that time Gretl Fegelein was heavily pregnant and gave birth to a daughter on May 5, 1945, whom she named "Eva" in memory of her sister.

From 2000, Eva Braun's cousin Gertraud Weisker reported on their time together in several television documentaries, interviews and the autobiographical novel Evas Cousine .

Eva Braun was trained at the Kloster-Handelsschule in Simbach am Inn and after graduating from school in Munich, she was employed as a photo laboratory assistant by Heinrich Hoffmann , who later became Hitler's photographer. There she met Adolf Hitler in 1929 at the age of 17 and was often invited to dinner or a drink by him in the years that followed, as well as being taken to the cinema. After the suicide of Hitler's niece Geli Raubal (1908–1931), contact between Braun and Hitler, who was 23 years older than her, intensified from 1932 onwards.

In the following years there was an intense relationship between Eva Braun and Hitler, which was kept secret from the public until the end of World War II. Hitler almost never appeared in public with her and even passed her off as a housekeeper in the closest circle of the Berghof , where Braun and Hitler lived together from 1936, although the relationship was known to a closer circle of confidants. Hitler often claimed that he didn't have time to marry. He was married to Germany, so marriage was never an option. In fact, before January 30, 1933, he had learned that he owed part of the approval of female voters to the fact that as a single man he was fit for projection . In addition, due to his pathological structure , Hitler did not have a single relationship with a woman that could be described as normal (see also Adolf Hitler's sexuality ).

On August 10 or 11, 1932, Eva Braun attempted her first suicide by shooting herself in the chest with her father's pistol . Historians see this as an attempt to get closer to Hitler without actually pursuing suicidal intentions. Already during the recovery it became apparent that the attempt welded the two together stronger than ever before. It is possible that this first alleged suicide attempt was viewed by Hitler as proof of absolute loyalty. On November 1, 1932, she shot herself in the neck with a 6.35 pistol; she felt neglected by Hitler, who was often on campaign trips before the Reichstag elections on November 6, 1932 .

At the end of 1932 they began a love affair, mostly secretly. Eva is said to have often spent the night in Hitler's Munich apartment when he was in town. Hitler officially had no love affair and forbade Eva Braun to show herself in public as a woman by his side. In the Berghof both rooms were next to each other and connected to each other. At the end of May 1935 Braun attempted another suicide with tablets , probably to reassure Hitler's affection; This suicide attempt is also predominantly viewed as an appellation suicide, which should not lead to death, but rather to more attention. Hitler had the attending doctor assure him that it was not a pretense. After the suicide attempt, Hitler gave her a villa at Wasserburger Strasse 12 (today Delpstrasse) in Munich's posh district of Bogenhausen , valued at 30,000  Reichsmarks . She no longer went to work for Hitler's personal photographer Heinrich Hoffmann, but was listed on his payroll at 450 Reichsmarks a month until the end of the war.

Eva Braun often invited friends and relatives to Obersalzberg to spend time there with the dictator, his confidants and aides. On official occasions on the Obersalzberg, such as visits by foreign politicians, NSDAP members or high-ranking military officials, Braun and her company usually had to withdraw. To a certain extent, this only changed with the marriage of her sister to Hermann Fegelein , liaison officer of the Waffen SS at the Führer ; As a result, Braun, as Fegelein's sister-in-law, was provided with a legend that made her stay plausible even for those who, according to Hitler's will, should or should not know anything about the relationship between Hitler and Braun.

Part of her imagination was officially becoming the first woman in the state. She said several times that she was subordinate to Hitler's will. The relationship between Eva Braun and Hitler was not described as harmonious by contemporary witnesses; Numerous disputes and humiliations of Braun by Hitler are documented within the narrowly limited public in which it was permitted. The depth of Hitler's emotional bond with Braun is as debatable as the extent of the sexual component of their relationship.

The Hitler biographer Joachim Fest wrote: "In contrast to Geli Raubal, Eva Braun was only his mistress , with all the fears and humiliations that this position entails."

The photo and film recordings made by Eva Braun, including a large number of color film recordings, which, among other things, show many National Socialist dignitaries in the private surroundings of Hitler's Berghof, are of a certain historical importance. She filmed with a 16mm - Agfa Movex camera. She named the recordings The Colorful Film Show .

Eva Braun came to Berlin from Munich on March 7, 1945 and moved into a room in the Führerbunker in mid-April . It is unclear whether she came to Berlin against Hitler's will. Despite requests from her family to leave Berlin, she stayed there until the end. Eva Braun and Adolf Hitler married on the night of April 29, 1945. The marriage was carried out by the city councilor and Gauamtsleiter Walter Wagner, witnesses were Joseph Goebbels and Martin Bormann .

One day later, on April 30, 1945, the present Eva Hitler committed suicide together with Adolf Hitler in the Führerbunker. She died from taking potassium cyanide . The corpses were burned by Martin Bormann, Hitler's valet Heinz Linge , his SS adjutant Otto Günsch and some bodyguards from the Führer Accompanying Command in the garden of the Reich Chancellery in accordance with Hitler's latest orders. After the arrival of the Allies, the charred remains of them were initially stored in a makeshift shell hole on the premises of the Reich Chancellery and, according to reports, later together with the remains of Hitler, Goebbels 'and his relatives, General Hans Krebs ' and Hitler's dogs a total of eight times, the last time in one Soviet barracks near Magdeburg , buried; It was not until 1970 that all of her remains were cremated and scattered in the Ehle near Biederitz on the instructions of KGB boss Yuri Vladimirovich Andropov . The time of death Braun was determined by a decision of the Berchtesgaden District Court of January 17, 1957 (Az .: II 2/57) to April 30, 1945, 3:28 p.m. This means that her official time of death is two minutes before Hitler's.

Judgment after the war

After her death and the end of National Socialism , Eva Hitler was classified by the Munich Chamber of Appeals as being burdened during the Nazi era (see denazification ). Her estate was confiscated, as it was found that it came exclusively from donations from Hitler. A posthumously published diary turned out to be a forgery; only a few pages of her diary from 1935, which were first published in 1968 by the author and journalist Nerin E. Gun , have survived .

Historians emphasize that Braun built and lived in an illusory world in which she blocked out all negative aspects of the dictator and his rule. In a time of hardship for the population and the World War that was largely caused by Hitler, she enjoyed permanent vacation in luxurious conditions in the seclusion and security of Obersalzberg. She shared this with her parents when, for example, she and her sister Gretl (see below) flew to Italy on Hitler's plane for a beach holiday. Historical events, which she inevitably learned about, were assessed in her notes solely according to whether they could prevent Hitler from returning home soon.

Eva Braun has been portrayed by actresses in films about Hitler, including: