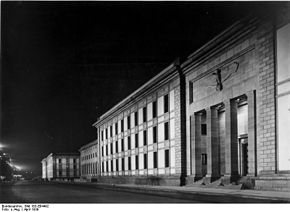 The New Reich Chancellery in Berlin's Vossstraße was built between 1934 (start of planning) and 1943 (cessation of construction) under Adolf Hitler according to plans by Albert Speer as a supplement to the old Reich Chancellery and the extension built in 1928–1930 in Wilhelmstraße . She is a perpetrator place . 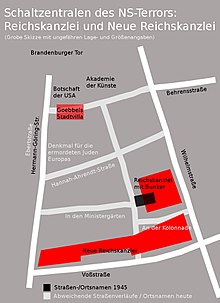 Construction of the New Reich Chancellery in Vossstrasse, 1938

On January 11, 1938, Hitler officially commissioned General Building Inspector Albert Speer with a new building along the entire Vossstrasse, which corresponds to a building front of 421 meters in length. The planning had already started in 1934, and from 1935 the 18 buildings on the street were bought up piece by piece. The Palais Borsig ( Vossstraße 1 ), which has also been in the hands of the Reich since 1934 , was not demolished but integrated into the new building. The construction plans were realized by Hans Peter Klinke .

From the beginning of 1938, the completion of the New Reich Chancellery was worked on at full speed, so that it could be completed in time for the annual diplomatic reception on January 7, 1939. This did not succeed; some expansion work lasted until the early 1940s. The description given by Speer in his autobiography after the Second World War that he was asked to see the “ Führer ” at the end of January 1938 and that he had completely surprisingly told him that Speer should design a New Reich Chancellery for him cannot otherwise be proven.

Overall, the construction of the Reich Chancellery cost 90 million Reichsmarks , which, adjusted for purchasing power, corresponds to around 388.3 million euros in today's currency.

When designing the New Reich Chancellery, Speer was mainly concerned with the architectural representation of the power and glory of the Fuhrer and the Reich. With the famous "Diplomatic Route" he created a magnificent and elongated 300-meter-long room suite: from the monumental "Ehrenhof", via a vestibule to the "Mosaic Hall", the "Round Hall", the "Marble Gallery" ending in the "Reception Hall" or in the “Führer’s study”. This architectural concept was based on the baroque enfilade , the representative path leading through lavishly furnished rooms to the absolute ruler. Speer and Hitler wanted to surpass the baroque display of splendor. The “marble gallery” was twice as long as the Hall of Mirrors at Versailles . The New Reich Chancellery was intended to impressively underpin the claim to German dominance in Europe. Architect Caesar Pinnau was responsible for the interior design of several offices, the Fuehrer's office and the large conference room .

Hitler's study was the largest and most magnificent room in the building. It had a footprint of almost 400 m² and was almost ten meters high. Noble materials were used: dark red Saalburg marble , rosewood and rosewood for the walls, rosewood for the coffered ceiling and Ruhpolding stone slabs for the floor. The generously dimensioned desk was decorated with inlays and the top was covered with red leather. The card table had a one-piece marble slab five meters long and 1.60 meters wide. Valuable paintings in splendid frames in accordance with Hitler's taste in art hung on the walls. Hitler used this office mainly for representation purposes.

To design the new Reich Chancellery, von Speer brought in numerous artists and craftsmen on behalf of Hitler. The furniture in the headquarters of power was made by hand especially for this building. This also applied to silver cutlery and tableware, tapestries and curtains.

Among the leading sculptors involved were

The building technology corresponded to the most modern standard at the time and included, among other things, air conditioning and escalators in the office wing.

Remnants of the furnishings can be found today in the German Historical Museum in Berlin (desk and globe from Hitler's study), in the Kremlin in Moscow (chandelier and candelabra), in the Pentagon in Washington (paintings), in the Museum of European Art in Nörvenich Castle (the Sculpture The Party ) and as loot and souvenir in the possession of former Allied soldiers and their heirs as well as private collectors (furniture, dishes).

Speer decorated the garden behind the main building with large bronze figures, including two ostentatious statues by Josef Thorak . One of the bronze horses was last seen on a barracks area of ​​the Russian armed forces in Eberswalde . Their whereabouts after the withdrawal of the Soviet armed forces from Germany in the 1990s was unclear until 2015, before the two “Striding Horses” were found on May 20, 2015 in a nationwide raid in Bad Dürkheim . A monumental granite relief by Arno Breker was discovered in a warehouse, which was probably intended for the triumphal arch that was not realized. 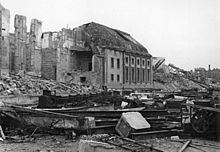 Demolition of the Reich Chancellery, around 1950

During the air raids on Berlin , the New Reich Chancellery was only slightly damaged until the end of the war. After the conquest of Berlin , the Soviet troops captured one of the imperial eagles (bronze work by Kurt Schmid-Ehmen ) from the imperial chancellery. The Soviet Union transferred it to Great Britain in 1946 . Today it is on display in the Imperial War Museum in London (see picture below).

As one of the central symbols of Hitler's power, the complex of buildings of the New and Old Reich Chancellery and the Borsig Palace , which had been destroyed to varying degrees, was demolished from 1949 to 1956 on the orders of the Soviet Control Commission .

Since after 1945 Saalburg marble (a red limestone and in the petrographic sense not real marble ) was used for representative buildings in the GDR , it was rumored that the floor and wall coverings of the New Reich Chancellery, some of which also consisted of this material, were being used again . This applies to the foyers of the Humboldt University and the Old Palace , the Mohrenstraße underground station and the Soviet memorials (in Treptower Park , in the Tiergarten and in Schönholzer Heide ). There is no direct evidence of this.

In Roberto Rossellini's film Germany in the year zero from 1947, several scenes take place in the ruins of the New Reich Chancellery. This shows that the floor coverings in the area of ​​the marble gallery have already been removed in sections.

During the foundation preparations for new buildings on the corner of Voss and Ebertstraße , fragments of former window frames or eaves were recovered in February 2008 . The stones could be assigned to the New Reich Chancellery.

Today a plaque from the Topography of Terror Foundation commemorates the building. The building site was rebuilt with multi-storey prefabricated apartments in the late GDR period around 1988 .