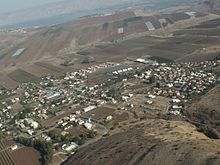 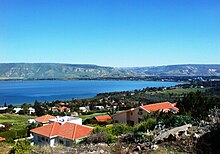 The moschava ( Hebrew מושבה, Plural מושבות Moschavot , also Moschawa ) is one of three rural forms of settlement in Israel . The better known and more common are the moshav and the kibbutz . The economy of the places is essentially based on agriculture. Unlike in moschav and kibbutz, the farmers are individual farmers with their own means of production. The land and operations are privately owned.

The moschavot is the oldest Jewish form of a rural settlement in today's Israel. The villages were usually laid out before the First World War based on the model of Central European villages. The founders were Jews who came to the country with the first or second aliyah or came from the original Jewish population, the old yishuv .

In total, significantly fewer than one hundred moschavot were founded. Cities have now developed from many moschavot. Today there are still five moschavot, all of which are in the northern district : Jabneel , Jokneam , Kinneret, Menahemia and Mitzpa.

In 1878, residents of Jerusalem founded Petach Tikwa, the first moschava. It was the very first Jewish agricultural settlement in what was then Palestine. That is why she later received the nickname "Mother of Moshavot" ( Em HaMoschavot ). The new foundation was abandoned because of malaria and floods.

In the first aliyah from 1882 the organization Chibbat Zion founded further moshavot. Most of the residents came from Eastern Europe, especially Russia . The second, now successful founding, now by immigrant Jews of the first Aliyah, took place in 1882 and coincided with the founding of Rishon leZion and Rosh Pina .

The first start-ups were not a success. The poor climatic conditions, the unfavorable soils, the lack of agricultural experience, the poor health and hygienic conditions (especially malaria), an inadequate infrastructure and the general hostility of the authorities of the Ottoman Empire made life in the moshavot very difficult.

Many moschavot were saved from economic collapse by the French-Jewish Baron Edmond James de Rothschild . He invested in the development of infrastructure and public services, in modern agriculture and in the processing of agricultural products. Above all, his investments in wineries became known . Baron de Rothschild also bought additional land and established new settlements. Although the moschavot managed to avoid a collapse and developed well, they paid with the loss of their independence, as the management had to be transferred to Baron de Rothschild. In January 1900 this transferred responsibility for "his villages" to the Jewish Colonization Association (ICA). With that the time of his direct guardianship came to an end. Since 1901 the ICA founded further moschavot.

The moschavot were exemplary for the beginning of Jewish settlement in Israel. They were the first to realize the ideas of the national rebirth of the Jewish people. They created the first basis for an independent Jewish life in Palestine based on agriculture, and thus for the later State of Israel. That is why they are also known as dawn .

Regarding the area: One acre corresponds to approx. 4047 m² .

This list does not include the five places in what is now the Syrian town of Hauran .