As a moshav or moshav ( Hebrew מוֹשָׁב mošav “seat, settlement” from the rootsישב, "Sit, live"; English Moshav ) is a cooperatively organized rural form of settlement in Israel , the goods of which are partly collective , partly private . The plural is moshavim or moshavim (Hebrewמושבים). The moshav should not be confused with the moshava (plural moshavot ), a form of settlement in which there is usually no collective property.

The moschav is the youngest and most common form of Israeli Jewish villages. Today there are 382 moschavim, in which almost 142,000 people live and work, that is 4.6 percent of the total population. 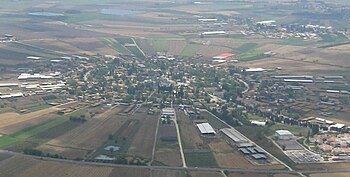 The moshav Nahalal from the air

A moschav is a village organized on a cooperative basis. The focus is on the self-managed farm. The property is usually national property and only leased for 49 years.

Four types of moschavim have developed, which cannot be strictly differentiated from one another:

The moschav Ovdim corresponds in its structure to the first moschav founded in 1923. This type represents the largest proportion among the moschavim today. The settlement acts as a cooperative that emphasizes individual family life inside. Decisions on the affairs of the moschav are made by the general assembly of settlers (Assefa Klalit), in which each farmer has one vote. The general assembly elects a committee (maskirut), which is responsible for the practical implementation of the decisions.

In a moshav Shitufi, land is shared and, similar to a kibbutz , is worked by the village community. Work and remuneration are based on the personal requirements and needs of the residents. The residents of this type of moshav take advantage of the community, such as the opportunity to make investments that would not be possible for a single farmer. At the same time the points of friction of the collective should be excluded: In contrast to the kibbutz, each family maintains its own individual household. The first Moschav Shitufi, Kfar Hittim , was founded in 1936.

These settlements have moved to industrial production : all kinds of products are made in factories. There are many reasons for turning away from agriculture .

At Moschav Asori, the focus is on regional planning. Both the settlement of the farms and the development of an infrastructure are planned centrally for the moschavim in a region (around ten to twelve settlements). In the regional center, the Moschav Azori, there are hospital, pharmacy, schools, etc.

Nahalal was the first moschav to be founded in 1921 in the Jezreel plain , approx. 25 km southeast of Haifa . In the following decades many more moshavim emerged; At the time the Israeli state was founded in 1948, there were already around 60. In the first years after 1948, the moshavim were mainly attracted by survivors of the Holocaust and immigrants from the Arab countries who did not really get used to the collective structures of the kibbutzim and in which the family has a high priority. By 1967 the number of moshavim had grown to almost 350.

The moschavim arose from the older kibbutzim . The founders of the moschav found the socialist character of these cooperative settlements to be too restrictive. In contrast to the kibbutz, individual interests and needs and, above all, private property were not frowned upon. On the contrary, the moschavim were distinguished from the start by the fact that each family ran its own household and cultivated a parcel of land (with an area of ​​three to four hectares). The machines were jointly owned; The purchase and sale of products were also carried out jointly. The decision of what to grow was an individual decision.

Since the 1950s, moschavim were also increasingly planned as central locations ( moschav Asori ), in which comprehensive services (clinics, secondary schools, workshops, factories for packaging and shipping) were concentrated for the moschavim in the region in order to improve profitability.

At the present time, many moschavim, especially smaller ones, are struggling with financial problems. Because of this, some farmers also work outside of the moschav; agriculture was partly given up. Other tendencies are to operate in larger units or to transfer responsibility entirely to the individual farmers. In general, a development of the moschavim towards "normal" villages can be observed.

The list of moshavim contains more detailed information on the individual moshavim .

These moshavim were abandoned under the disengagement plan:

The Christian moschavim, such as Nes Ammim , which is known beyond the borders of Israel , form a marginal phenomenon.