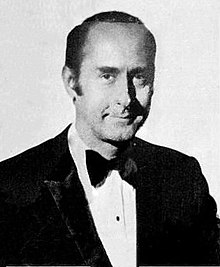 Henry Mancini , actually Enrico Nicola Mancini (born April 16, 1924 in Cleveland , Ohio , † June 14, 1994 in Beverly Hills , California ), was an American composer . His musical focus was on jazz , especially swing . Mancini's best-known compositions include the score for Der Rosarote Panther (including the theme song The Pink Panther Theme ), the song Moon River from his music for Breakfast at Tiffany's, and the Peter Gunn Theme from the US crime series Peter Gunn .

Henry Mancini's parents, Quinto Mancini and Anna Pece, had come to the USA from Italy , or more precisely Abruzzo , in the years before the First World War , where they met and married. Quinto still had to earn his living as a steel worker, but the love for music was there. He got his only child, Henry, to learn the piccolo and flute , and both he and Henry played these instruments in the immigrant folklore band "The Sons of Italy" in little Aliquippa , Pennsylvania . The repertoire consisted mainly of Italian opera overtures, marches and popular songs from home in Old Europe. Mancini began to learn the piano at the age of 12. After graduating from high school, he went to the prestigious Juilliard School of Music in New York . A year later - the USA had meanwhile entered World War II - he was called up for military service and was involved in the liberation of the Mauthausen concentration camp in 1945 .

Mancini's great passion was and remained big band , swing and jazz. As early as the 1940s, Mancini had contact with the swing and jazz greats of the time, especially Benny Goodman . He sent some of his own arrangements to him. Goodman offered him a job and so Mancini joined the newly formed Glenn Miller Band in 1946 (Miller was missing, the orchestra was directed by Tex Beneke ). After the war, Mancini expanded his knowledge of composition and composition with studies with the well-known composers Ernst Krenek and Mario Castelnuovo-Tedesco .

In 1952 the Universal studio gave him a two-week job for an Abbott and Costello film: Abbott and Costello Go to Mars (1953). The collaboration ultimately lasted six years. During this time, Mancini worked his way through all conceivable film genres as a composer and arranger, but mostly without being included in the film credits. So he was z. B. also for the films Der Schreck vom Amazonas (1954, in 3D ), Die Rache des Ungeheuers (1955, also in 3D), Metaluna IV doesn't answer (1955) and Tarantula (1955). At the time, the division of labor between different composers was necessary and common due to time constraints. Other well-known composers in the Universal Music Department under the direction of Joseph Gershenson were the Austrian emigrants Hans J. Salter and Herman Stein .

The success of Mancini's adaptations for the films The Glenn Miller Story (1954, first Oscar nomination for Mancini) and "The Benny Goodman Story" (1955) opened up the possibility for him to introduce new musical styles for further films. With Alex North ( Endstation Sehnsucht ), Elmer Bernstein ( The Man with the Golden Arm ) and Leith Stevens ( The Wild ), Mancini was one of the first to introduce jazz into orchestral film and television music, which until now had been dominated by late romanticism. Mancini described the music for the Orson Welles film In the Sign of Evil (1958) as the best performance of his Universal time, which was the first major film score with Latin American jazz at the time.

The collaboration with the film director Blake Edwards , first for the television series Peter Gunn (1958) and Mister Lucky (1960/61), gave Mancini the opportunity to develop his popular style and became one of the most successful periods of his career with pieces of music for breakfast Tiffany (1961, including one of his most famous songs, Moon River ), The Days of Wine and Roses (1962), to the crime comedies with Peter Sellers about the Pink Panther (from 1963), to The great race around the world (1965 ), The Last Train (1962), The Party Schreck , Ten - The Dream Woman , Victor / Victoria and many more. Edwards and Mancini worked together on nearly 30 films. Mancini also worked again with Edwards for the musical version of Victor / Victoria .

The second director who helped Mancini develop great music scores was Stanley Donen , for whom he et al. a. composed the music for Charade (1963), Arabesque (1966) and Zwei auf dem same Weg (1967). There were also many other directors who benefited from Mancini's music, such as Howard Hawks for his film Hatari! (1962) Mancini - in addition to the surprisingly elegiac, originally orchestrated main motif - wrote the “ Baby Elephant Walk ” that has become an evergreen , Martin Ritt with his film Verflucht bis zum Judsten Tag (1970), Vittorio De Sica with sunflowers (1970), Norman Jewison with Gaily, Gaily (1969), Paul Newman with You Want To Be Giants (1970) and The Glass Menagerie (1987), Stanley Kramer with Oklahoma Crude (1973), George Roy Hill with Reckless Fliers (1975), Arthur Hiller with Trans-America -Express (1976) and Ted Kotcheff with Die Schlemmer-Orgie (1978). Henry Mancini has written a total of 480 film and television compositions.

Henry Mancini was nominated for 18 Academy Awards and won it four times. He also won 20 Grammys and two Emmys . Mancini recorded over 50 commercial music albums for RCA . These made him one of the most popular representatives of easy listening music, although this label does not do him justice. He not only wrote witty pieces in jazz, swing, Latin and soul styles, but also large orchestral scores, such as for the films Lifeforce - Die tödliche Threathung (1985) and Basil, the great mouse detective (1986).

Since the 1960s, Mancini has been a regular guest conductor with the major American and European symphony orchestras, with whom he has performed his own compositions and popular pieces by his film music colleagues. He often played the flute or piano himself and took his own little jazz combo with him on his tours.

In 1996 the Henry Mancini Institute was founded, where young musicians could gain professional experience for their careers in the music business. It was directed by Patrick Williams , Jack Elliott was also involved. At the end of 2006 the institute had to close for financial reasons.

On April 13, 2004, a 37 ¢ commemorative stamp was issued in the USA on the occasion of his 80th birthday, showing his portrait and listing various of his compositions.

Henry Mancini had an unmistakable style of his own, which was characterized by great lightness and often astonishing simplicity and clarity. Mancini was mainly influenced by swing, jazz, Latin American music and the refined sound culture of the French impressionists ( Debussy , Ravel ). His sense for the finest sound nuances and unusual instrumentation, combined with a feeling for elegant melodic lines, made him an outstanding film composer.

Mancini was married to singer Virginia O'Connor until his death and has two twin daughters, Monica and Felice, and a son, Christopher. Monica began her own singing career after her father's death, recording CDs and becoming one of the most empathetic interpreters of her father's best songs. Chris Mancini is also active as a musician.