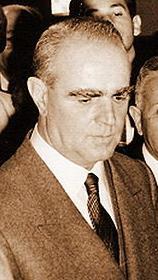 Konstantin Karamanlis was born in a small village in eastern Macedonia . From 1913 to 1924 he attended school, from 1925 to 1929 he studied law in Athens. In 1932, after completing his military service, he began his career as a lawyer. After the parliamentary elections in 1935 , he entered parliament for the first time as a member of the People's Party for the constituency of Serres . In 1936, after being re-elected to parliament, he refused to cooperate with the Metaxas regime. He practiced as a lawyer again and lived in Athens from 1941 to 1944 (which at that time was occupied by the Wehrmacht ). After a brief escape to the Middle East, Karamanlis returned to Athens. In March 1946 he was re-elected to parliament.

After the death of Prime Minister Alexandros Papagos on October 5, 1955, Karamanlis was commissioned by King Paul I to form a new government. In 1955 he founded the conservative party ERE . In the elections on February 19, 1956 , May 11, 1958 and October 29, 1961, this received an absolute majority of the seats.

Karamanlis drove the expansion of the Greek infrastructure at this time and in June 1961 reached the conclusion of an association agreement with the European Economic Community . The economy recovered quickly and national income grew an average of 6.25% per year. During his tenure as prime minister, the pacifist parliamentarian Grigoris Lambrakis was assassinated on May 27, 1963. Their investigation revealed the involvement of the police and judiciary with right-wing, royalist circles. Karamanlis resigned on June 17, 1963 after differences with King Paul over influence over the military. In the parliamentary elections on November 3, 1963 , his party ERE received only 39.37% of the vote (after 50.81% in the election on October 29, 1961) and 138 of the 300 seats. Karamanlis went into exile in Paris.

Military rule collapsed in the course of the Cyprus crisis in 1974 . Under pressure from the Western community, President Gizikis recalled Karamanlis from exile in Paris , into which he had gone after the 1964 election defeat. Karamanlis was flown in on a plane owned by French President Valéry Giscard d'Estaing , greeted by a cheering crowd and sworn in as Prime Minister on the night of July 24, 1974. He formed a government of national unity. In autumn 1974 he founded the liberal-conservative Nea Dimokratia . Karamanlis and his government ensured free elections, a new constitution and the arrest of junta officers within a year.

Karamanlis remained Prime Minister even after the 1974 and 1977 elections.

During his tenure from 1974 to 1980, Karamanlis succeeded in the transition from military dictatorship to democracy, the "political turnaround" ( Greek μεταπολίτευση metapolitefsi ), which earned him great international recognition. He had the Communist Party's ban lifted after about 30 years. In 1974 he had a referendum to abolish the monarchy carried out, which confirmed the republic that had been declared under the military dictatorship. There was again economic prosperity during his term of office, but also an opening up in foreign policy towards the Arab and Eastern European countries. When NATO watched the Turkish invasion of Cyprus inactive in the summer of 1974, Greece under Karamanlis withdrew from NATO for several years in protest. In 1979, the European Economic Community decided to accept Greece for 1981, which was based on Karamanlis' European policy. In 1980 Karamanlis resigned as prime minister and party leader.

In 1980 Karamanlis was elected President . He ended his first term of office by resigning before the regular deadline after Prime Minister Andreas Papandreou refused to support PASOK for re-election. In 1985 he initially withdrew from politics, but under pressure from the public in 1990 he ran again for president and was elected with the support of the New Democracy . His second term ended in 1995.