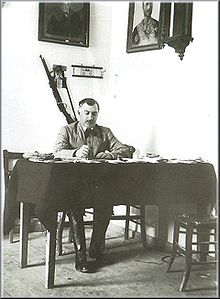 His father Panagiotis Sofoulis was a champion for the autonomy of Samos . In other sources, Themistoklis was born as 1862. He completed a degree in philosophy and archeology at the National and Kapodistrian University of Athens and at universities in Germany . As an archaeologist, he wrote several scientific papers and was a participant in several excavations in Greece until 1900.

In 1900 he ended his work as an archaeologist after being elected member of the Parliament of Samos. In parliament he fought vehemently for the island's political freedom in accordance with the Treaty of Autonomy of 1832. Very soon, with the support of progressive and liberal factions, he practically became the ruler of Samos. In 1907 there was a confrontation with the then governor of the island, Andreas Kopasis , who asked for the intervention of Turkish troops. After uprisings, Turkish troops did invade. Sofoulis, who was now the leader of the Greeks on the island, had to flee to mainland Greece after the assassination of the governor. Even under his successor as Governor Grigorios Veglaris , there was a new autonomy movement in 1912.

After Sofoulis returned to Samos, the Turkish army intervened again. As early as November 11, 1913, the Revolutionary Commission of Samos, chaired by Sofoulis, issued a resolution for unification with Greece. After the return of the Turkish troops to Asia Minor , an armistice agreement was signed on December 23, 1912, and Samos was finally unified as part of Greece on March 2, 1913 as a result of the Balkan Wars . Sofoulis was then president of the interim government of Samos until April 1914. He was then general commander of Macedonia until February 1915 . However, after a dispute between his party leader Eleftherios Venizelos and King Constantine I , he resigned from this office.

Member of parliament and promotion to chairman of the Liberal Party

In the elections to the Greek National Assembly (Voulí ton Ellínon) in May 1915, he was elected for the first time as a member of parliament. From August to October 1915 he was Minister of the Interior of the counter-government of Venizelos in Thessaloniki . Only after King Constantine abdicated on June 12, 1917 and went into exile, Venizelos and Sofoulis returned to Athens . He was then speaker of the National Assembly until 1920.

After Venizelos went into exile in Paris after the defeat in the parliamentary elections of 1920 , he succeeded him as chairman of the Liberal Party.

Prime Minister and Speaker of Parliament

From July 24th to October 7th, 1924, he was Prime Minister for the first time. After the overthrow of the dictatorship of General Theodoros Pangalos in August 1926, he was again speaker of the National Assembly until 1928. After Venizelos' return to Greece and the national election victory of the Liberal Party, he was minister in the fifth cabinet of Venizelos from 1928 to 1930.

He was then re-elected speaker of parliament. During these years he was seen as vice-chairman of the Liberal Party, even if that position did not officially exist. After the defeat in the election to the National Assembly in November 1932 and the formation of a government by the People's Party of Panagis Tsaldaris , he had to resign from his position as speaker of the National Assembly. During the dramatic events that led to the resignation of Tsaldaris on January 16, 1933 and the reintroduction of the monarchy in October 1935, he maintained a moderate attitude that was valued by King George II . On March 16, 1936, he was finally re-elected speaker of the National Assembly. In the same year he was a signatory of the infamous Sofoulis-Sklavainas Agreement between the Liberal Party and the Communist Party (KKE) . During the subsequent dictatorship of General Ioannis Metaxas, he again behaved moderately and calmly.

During the occupation of Greece by German Wehrmacht troops from 1941 to 1944, despite his age, he was temporarily active in the Greek resistance through his contacts with the British Mediterranean Army . In 1944 he was captured by the German occupation forces and placed under house arrest.

After the end of the Second World War he was Prime Minister from November 22, 1945 to April 4, 1946, but had to resign from this post after the election victory of the People's Party under Konstantinos Tsaldaris .

However, he became Prime Minister again on September 7, 1947 and as such formed a coalition government between his Liberal Party and the People's Party. Most of the Greek Civil War fell within his term of office. During the war, he also convinced Alexandros Papagos to return as an army general. He died in office on June 24, 1949, a few months before the end of the civil war on October 9, 1949.