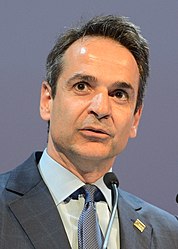 Kyriakos Mitsotakis ( Greek Κυριάκος Μητσοτάκης , born March 4, 1968 in Athens ) is a Greek politician and has been the Greek Prime Minister since July 8, 2019 . Since January 11, 2016, he has been chairman of the Nea Dimokratia (ND). Previously, he was Minister for Administrative Reform and E-Government in the Samara Cabinet and from 2016 to 2019 opposition leader in the Greek Parliament.

Kyriakos Mitsotakis comes from a Cretan family who settled in Athens, Eleftherios Venizelos was his great-uncle. His father Konstantinos Mitsotakis had to go into exile as an opposition politician during the Greek military junta , the family moved to Paris when Kyriakos Mitsotakis was 6 months old and returned in 1974 after the end of the dictatorship. In 1989 his father became Prime Minister and later Honorary President of the Nea Dimokratia.

In 1986 Kyriakos Mitsotakis graduated from Athens College as the best in his class and studied at Harvard and Stanford. He is married to the Greek Mareva Grabowski and they have three children together, Sophia, Konstantinos and Dafni. Kyriakos Mitsotakis speaks fluent English and French as well as some German.

From 1990 to 1991 he worked as a business analyst at Chase Manhattan Bank in London and then did his military service in Greece. He then obtained his master's degree in “International Economic Relations” with a focus on “European Unification” at Stanford University in the USA. He completed his studies with another Masters in Business Administration from Harvard Business School . Between 1995 and 2003 he worked at McKinsey and Greek banks.

Since March 2004 he has been a member of the Nea Dimokratia in the Greek parliament. From June 25, 2013 to January 26, 2015, he was Minister for Administrative Reform and E-Government in the Samara cabinet .

Mitsotakis was elected party chairman on January 10, 2016 in a runoff election by the party base and supporters of the Nea Dimokratia.

Within the party, Mitsotakis is more likely to belong to the economically liberal wing of the New Democracy. During his tenure as Minister for Administrative Reform, he presented detailed plans for savings in the state apparatus, which, among other things, provided for the equalization (uniform grades) of wage inequalities for public employees. In return, he proposed a reduction in taxes by at least one billion euros. However, this relatively radical reform was rejected by the then coalition partner PASOK and therefore abandoned by the government. In addition, he was mainly busy with staff transfers and the improvement of electronic data processing, with the aim of increasing the efficiency of the administration and saving citizens unnecessary administrative procedures. He also proposed a rating system for civil servants, which, according to him, should only be introduced for promotion purposes and for the award of bonus payments; Under no circumstances should officials with bad ratings be dismissed. These plans could not be implemented before the change of government on January 26, 2015 and were not pursued by the new government .

In the course of his candidacy for the party chairman of the Nea Dimokratia , he came back to his earlier savings plans and proposed concrete savings of 2 billion euros in return to finance a tax cut package.

Polls have been suggesting since at least 2017 that Mitsotakis would become prime minister after the next general election in Greece. In the European elections on May 26, 2019, the Greek Prime Minister Alexis Tsipras was clearly defeated by Kyriakos Mitsotakis' opposition, whereupon he announced early elections on July 7, 2019 that same evening . This won Mitsotakis ND, whereupon he was sworn in as the new Prime Minister a day later.

Acting heads of government in the European Union