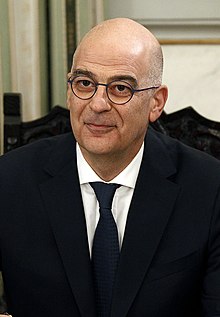 Nikolaos-Georgios "Nikos" Dendias ( Greek Νίκος Δένδιας , born October 7, 1959 in Corfu ) is a Greek lawyer and politician. He has held several ministerial posts and has been foreign minister in Kyriakos Mitsotaki's cabinet since 2019 .

Dendias comes from the small island of Paxos . He attended the first three classes of primary school in Corfu and then until 1978 the Athens College (Κολλέγιο Αθηνών). He studied law at the National and Kapodistrian University of Athens . After graduating in June 1983, he was admitted to the University of London , where he studied nautical and insurance law at University College (UCL) and criminology at the London School of Economics and Political Science (LSE), and in 1984 a Master of Laws (LL.M .) obtained. In 1985 he joined the army, where he served as an infantry officer and attended courses at the War College. He is a lawyer on the Supreme Court .

In 1978 Dendias joined the youth organization ONNED of the Nea Dimokratia (ND) party . He was also active in the ND student union and was elected to the governing body of the Law Faculty of the University of Athens after Kostas Karamanlis . In 1980 he was elected to the ONNED's Central Student Secretariat. In 1980 he attended a special seminar for senior party officials from the Konrad Adenauer Foundation . In 2000 he ran for a seat in parliament. In the election in March 2004 he was elected for the first time as a member of the ND in parliament. In May 2008 he became deputy parliamentary group leader of the ND. He has been a member of the Parliamentary Assembly of the Council of Europe since 2004. From January 2009 until the elections on October 4, 2009 he was Minister of Justice in the government of Kostas Karamanlis. In December 2010 the group became chairman of the ND. In the Cabinet Samaras he was on 21 June 2012 to 10 June 2014 Minister of Public Order and Citizen Protection, then Minister of Development and competitiveness and, after the departure of Dimitris Avramopoulos his successor as defense minister.