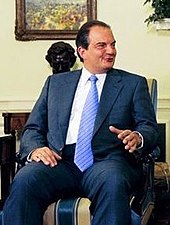 Kostas Karamanlis on a visit to the White House in 2004

Konstantinos Karamanlis ( Greek Κωνσταντίνος Καραμανλής , in the commonly used short form Kostas ; born September 14, 1956 in Athens ) is a Greek politician. He was Prime Minister of Greece from March 2004 to October 2009 . From 1997 to October 2009 he was chairman of the Nea Dimokratia party .

Kostas Karamanlis, a nephew of the former Prime Minister and President Konstantinos Karamanlis , studied law at the National and Kapodistrias University in Athens and economics at Deree College. He continued his studies at the Fletcher School of Tufts University in the USA, where he received his PhD in Politics and International Relations.

Karamanlis joined the youth organization ONNED of the Nea Dimokratia party and worked from 1974 to 1979 and 1984 to 1989 in organizations of ONNED and Nea Dimokratia. He wrote historical treatises and a book on Eleftherios Venizelos .

Karamanlis married Natasa Pazaitis in 1998 and has had a daughter and a son (twins) since 2003.

In 1989 he moved to the Greek parliament as a member of the New Democracy . In 1997 he became chairman of his party. In the parliamentary elections in 2000 he only narrowly lost to the PASOK party.

After the victory in the parliamentary elections on March 7, 2004 against the Panhellenic Socialist Movement ( PASOK ) with the leading candidate Giorgos A. Papandreou , Karamanlis succeeded Kostas Simitis in the office of Prime Minister, making him the youngest in the recent history of Greece. On March 8, 2004, President Konstantinos Stefanopoulos charged him with forming a new government. One day later, on March 9, 2004, he presented his new government team. He appointed the diplomat Petros Molyviatis as the new foreign minister . This is considered an expert on the Cyprus question and was a confidante of Konstantinos Karamanlis . The new Greek government had 19 ministers, including two women. After his election, Karamanlis declared the preparations for the Olympic Games in Athens in August 2004 a top priority .

On September 16, 2007, Karamanlis defended his party in first place in the spectrum of parties in a parliamentary election that was brought forward on his decision . With this, the ND achieved the majority of seats in parliament due to the Greek electoral law. The choice was overshadowed by the fire disaster in late summer 2007 .

The Karamanlis government was shaken by a scandal over controversial real estate transactions between the Greek state and the Athos monastery at Vatopedi . The monastery claimed ownership of Lake Vistonida, which was supposedly bequeathed to it by Byzantine emperors almost 1000 years ago . Although these claims of the monastery were dubious, they were recognized by the state: In exchange for the lake with its entire water surface and all shore properties, the monastery received 260 valuable properties in touristic developed areas, including in the Olympic village in Athens, some of which it immediately resold at a profit . "They sold the lake - in other words," air "- to the state and got valuable offices, land and buildings in Athens for exchange," criticized the opposition. The damage caused to the state by the fact that the lake properties claimed by the monastery were greatly overvalued and the state barter properties were greatly undervalued is estimated at 100 million euros. The real estate scandal initially led to the resignation of the Marine Minister for Commerce, Giorgos Voulgarakis, who was involved in the real estate business . Two prosecutors resigned because the government interfered with their investigative work. The government spokesman for state minister Theodoros Rousopoulos , a friend of Vatopedi's abbot Efraim and at the same time a close confidante of the head of government, who resigned on October 23, 2008 , also came under heavy attack from the opposition . The real estate scandal, as well as the country's financial crisis in general, were major reasons why Karamanlis announced early elections.

In the parliamentary elections on October 4, 2009 , Karamanlis lost his government majority. His party Nea Dimokratia lost over 8 percentage points and with around 33.5 percent only achieved 91 of the 300 seats. Karamanlis resigned from the party leadership on election evening. After his election, the financial situation of Greece turned out to be much more devastating after the announcement by the new government, which led to the Greek sovereign debt crisis .