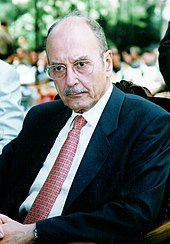 Konstantinos Stefanopoulos ( Greek Κωνσταντίνος Στεφανόπουλος , born August 15, 1926 in Patras ; † November 20, 2016 in Athens , actually Konstantinos Dimitriou Stefanopoulos ; known as Costis or Kostis Stefanopoulos) was a Greek politician . He was President of Greece from 1995 to 2005 .

Konstantinos Stefanopoulos is the son of a lawyer, member of parliament and minister. He studied law at the University of Athens and practiced as a lawyer in Patras from 1954 to 1974 .

Stefanopoulos was married to Eugenia "Jenny" Stounopoulou from 1959 until her death in 1988. He had three children and six grandchildren.

During the Greek military dictatorship from 1967 to 1974 he abstained from all political activity and devoted himself exclusively to his profession. In 1974 he joined Konstantinos Karamanlis' newly founded party Nea Dimokratia (ND) and was elected to its central committee. He was the party's parliamentary spokesman and ran for chairmanship twice in 1981 and 1984.

In the parliamentary elections in 1974 , 1977 , 1981 and 1985 he was re-elected as a member of the New Democracy of Achaia . As a member of DIANA for the constituency of Athens I, he entered parliament after the general election in June 1989 .

After differences with party chairman Konstantinos Mitsotakis , he resigned from the ND in August 1985 and founded the Democratic Renewal (DIANA) together with nine other apostates . For this he moved into the Greek parliament in 1989. He was chairman of DIANA until this party lost and disbanded in the European Parliament elections in 1994.

On March 8, 1995, Stefanopoulos was elected President of the Republic by Parliament. He was nominated by the Politiki Anixi party and supported by the PASOK (Panhellenic Socialist Movement). He won the election in the third ballot with 181 votes. In February 2000, with the support of the two major political parties, he was re-elected in the first ballot with 269 out of 298 votes.

On March 8, 2004, following the election victory of the Greek Nea Dimokratia, he commissioned its top candidate Kostas Karamanlis to form a new government . A highlight of his political career was the opening of the Olympic Games in the summer of 2004 as the first Greek head of state in over 100 years.

His successor was Karolos Papoulias .