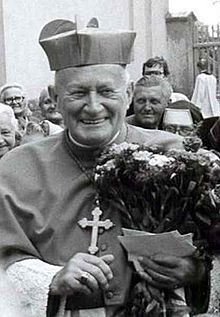 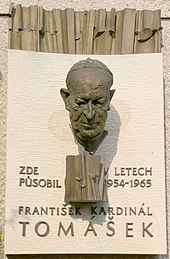 František Tomášek came from a large family. His father of the same name was a senior teacher and organist. His mother was Zdenka Tomášková born. Vavrečková. At the age of seven, František became a half-orphan because his father died in 1906.

After graduating from the Slavic Gymnasium in Olomouc , František Tomášek entered the Olomouc seminary in 1918 and studied Catholic theology . On July 5, 1922, he received by the Olomouc Archbishop Anton Cyril Stojan the priesthood . Then he worked as a community chaplain and religion teacher. In 1934 he became assistant at the Faculty of Theology in Olomouc, where he 1938 Dr. theol. received his doctorate . After the formation of the Reich Protectorate of Bohemia and Moravia , the Czech universities were closed by the German occupying forces . As a result, Tomášek was unable to continue working at the university. During the Second World War , in addition to pastoral work, he was again active as a religion teacher.

After the universities were able to resume operations after the end of the war, Tomášek became a lecturer in 1946 and professor for religious education at the Theological Faculty in Olomouc in 1947 . Like all departments of theology were they after the takeover of Czechoslovakia in 1948 by the Communists closed.

After Pope Pius XII. asked the bishops of the communist countries to consecrate Bishop precaution possible successor in the event of their arrest, gave him on 14 October 1949, the Bishop of Olomouc Josef Karel Matocha secret the episcopal ordination . At the same time Pope Pius XII appointed him. to titular bishop of Butus .

On July 23, 1951, Tomášek was arrested by the communist rulers and held in the state internment camp for priests in the Želiv monastery , which was closed by the communists . During this time, he was forced to do hard labor in a quarry.

After the end of Stalinism and the subsequent temporary political liberalization, Tomášek was released from prison on April 28, 1954. In contrast to many other fellow priests, he was allowed to work as a parish administrator in Huzová . Although the state did not allow him to exercise his episcopal functions, he was allowed to participate in the Second Vatican Council from 1962 to 1965. While he was apparently classified as politically reliable by the state authorities, he was considered a deeply devout and reliable Catholic in the Vatican. His council companions were also spies of State Security .

After Cardinal Josef Beran was not allowed to return to Prague from a trip to Rome in 1965, Pope Paul VI appointed. František Tomášek as Apostolic Administrator of the Archdiocese of Prague. He retained this office after Beran's death in 1969. In the 1970s, he is said to have signed a commitment to cooperate with the state authorities. A concrete collaboration could not be proven to this day. And the fact that the Pope accepted him as Cardinal In pectore on May 24, 1976 in the College of Cardinals speaks against cooperation with the secret police. The public announcement of the cardinal's appointment took place in 1977. His titular church was Santi Vitale, Valeria, Gervasio e Protasio .

Finally, at the age of 78, František Tomášek was appointed Archbishop of Prague on December 30, 1977. Since he campaigned for democratic renewal and religious freedom in Czechoslovakia and denounced the prevailing conditions, he was still hindered in his exercise of office and was under observation by the security authorities, who tried to use him for their purposes at the same time.

In the early 1980s, he called on the priests to refuse any cooperation with the government-supported, regime-friendly priest organizations . He also warned against reading the official Catholic church newspaper, which was also considered the mouthpiece of the state. In early 1988, he presented the Prague government with a petition , signed by 600,000 believers, calling for improvements in political and religious life. On the occasion of the 20th anniversary of Jan Palach's death in January 1989, Tomášek criticized the police's actions against the demonstrators in an open letter. Even beforehand, he called on the government to comply with the requirements of the CSCE's declaration of human rights .

Tomášek rendered great services to the canonization of St. Agnes of Bohemia , which took place on November 12, 1989. On November 21, 1989, he called for support for the Velvet Revolution and unequivocally sided with the demonstrators.

One of the positive highlights of his tenure was the 1990 pastoral visit of Pope John Paul II in the Czech Republic. In March 1991, the now 92-year-old Tomášek resigned from his post for health reasons. After his death the following year, he was buried in St. Vitus Cathedral.

In 1997 he was posthumously awarded the international Adalbert Prize .