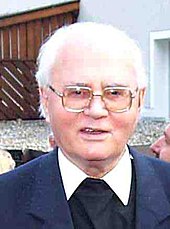 Born in Poland, Kalata (Kaľata) entered the Society of Jesus at the age of 18 and began his studies in Bohemia . However, these were made more difficult when the dissolution of the monasteries in Czechoslovakia was ordered in 1950 . This was followed by internment in a labor camp and three years of military service. On August 12, 1951 he received in Bratislava the priesthood .

Four years later, on September 9, 1955, Ján Chryzostom Korec SJ secretly donated him the episcopal ordination , since at that time all diocesan bishops in Czechoslovakia were arrested or were under constant surveillance. He could only exercise his episcopate in secret.

Because of his membership in the Jesuit order and continued priestly activity, he was sentenced to a total of eight years in prison, loss of civil rights and forced labor. In 1968 Kalata was given an amnesty , but he was still forbidden from pastoral work. In 1969 he was able to travel to Austria , where he completed his studies in Innsbruck. Since 1976 he lived in Grunern, a district of Staufen im Breisgau , near Freiburg, and served the Archdiocese of Freiburg from 1983 to 2009 .

In 2009 he moved to a nursing home run by the Slovak Jesuits in Ivanka pri Dunaji (Slovakia).