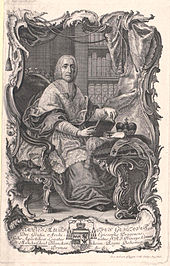 Johann Moritz Gustav had been a member of the Cologne Cathedral Chapter since 1685. In 1692 he was a student at the University of Cologne and in 1695 he was appointed to the Strasbourg cathedral chapter . In the administration of the Electorate of Cologne he held various positions and in the Electorate of Trier he held the office of an electoral council. In 1721 Emperor Karl VI appointed him . to the successor of the late Bishop Joseph Ignaz della Rovere in Wiener Neustadt . After the priestly ordination on August 3, 1721 he was by Pope Innocent XIII. on January 14, 1722 confirmed as Bishop of Wiener Neustadt. Despite his office as bishop, he rose to the position of cathedral provost in Cologne in 1725. Although he was appointed Archbishop of Palermo in 1730 , his inauguration did not take place there.

On December 18, 1733 he was by Emperor Charles VI. appointed Archbishop of Prague. After he had resigned to the Diocese of Wiener Neustadt, he received the papal translation on December 18, 1733. The enthronement as Archbishop of Prague took place on September 12, 1734. Subsequently, he emphatically carried out the re-Catholicization in Bohemia . He and his vicar general as well as the abbot of Strahov Monastery belonged to the state religious commission for expropriations and conversions. The missionaries sent were obliged by the Prince-Archbishop of Manderscheid-Blankenheim to submit annual reports.

In the First Silesian War he was in 1741 in homage of the Elector Karl Albrecht of Bavaria provided present and for the coronation. After the reconquest of Prague on December 25, 1742, Archduchess Maria Theresa set up an investigative commission to investigate Manderscheid's disloyal behavior. Although he did not recognize the alleged facts, they banished Archbishop Manderscheid-Blankenheim from Prague. At her request, Maria Theresa's coronation as Queen of Bohemia was carried out in 1743 by the Archbishop of Olomouc Jakob Ernst von Liechtenstein-Kastelkorn . Archbishop Manderscheid no longer received the grace of the sovereign Maria Theresa. In 1752 Anton Peter Příchovský von Příchovice was appointed as coadjutor , who succeeded him in 1763 as Archbishop of Prague.

Archbishop Manderscheid died on October 26th, 1763 at the Breschan Castle west of Prague, which belonged to the episcopal estates. He bequeathed the Dobrejowitz estate east of Prague, which he had acquired for 217,000 guilders, to the Archdiocese of Prague .