A hexachord (from Greek hexa "six", chordé " string ") is a series of six successive tones or tone classes in music theory .

Hexachords in the Middle Ages 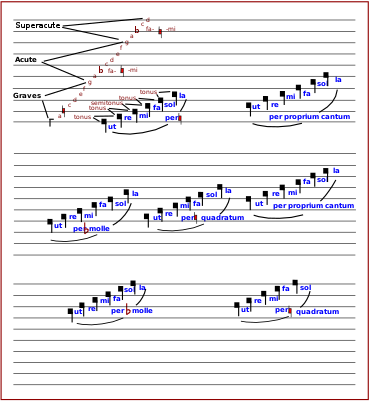 In medieval music theory, hexachords (probably derived from the notes of the six- string lyre ) formed the basis for learning Gregorian chant . Different hexachords are to be thought of as overlapping excerpts from the entire tonal supply from G to e ".

The hexachord is an extension of the Greek tetrachord (efga), which in the 9th century (around Hucbald ) was shifted one tone down to the basic tones of the four church modes (defg). A whole step was added to these four tones at the top and bottom (c and a).

In every hexachord the two middle tones are a semitone step apart, all others are a whole step apart.

The hexachords were based on C, F or G, accordingly there were three types of hexachords:

Guido von Arezzo underscored the tones of the hexachord with the solmization syllables ut, re, mi, fa, sol, la , which are taken from the John's hymn Ut queant laxis . The guidonic hand was perhaps already used as an aid to him, but certainly to later teachers of the Middle Ages .

b durum and b molle

Originally there was only level B between the grades A and C. The system of hexachords resulted in two varieties of the B:

The naming of the major and minor pitches is ultimately based on these names :

When setting the tone names in writing , the (lower case) B was drawn differently as required:

After numerous variations on this calligraphy developed from the b quadratum and b rotundum finally today's pros and accidentals .