The Viktoria-Luise-Platz is located in the Bavarian quarter in the district of Schöneberg of Berlin district of Tempelhof-Schöneberg . The listed area has the shape of an elongated hexagon and is named after Viktoria Luise von Prussia , the only daughter of Kaiser Wilhelm II.

The square is 160 meters long and 90 meters wide and has an area of ​​around 7000 m². The Welserstrasse and Winterfeldtstrasse as well as the Münchener and Regensburger Strasse flow here . The Motzstraße , which runs transversely and is around 1.5 kilometers long , is divided into two sections by the square.

Schöneberg and the BBG

Soon after the empire was founded in 1871, the communities in the immediate vicinity, such as the city of Charlottenburg and the more rural community of Schöneberg, had a share in the dynamic development of the capital of the German Empire . Schöneberg's population rose from 4,555 in 1871 to 95,998 in 1900. In 1898, the town received city ​​rights . It was not until the creation of Greater Berlin in 1920 that Schöneberg was incorporated together with a number of other previously independent communities. At this point in time, the new district had long been enclosed by the extensive development of Berlin.

By 1900 the increasing development had reached the damp meadow area in the area of ​​today's Viktoria-Luise-Platz. The "Berlinische-Boden-Gesellschaft" (BBG) founded in 1890 with its main shareholder Georg Haberland led the way in the development of the site . In the meantime, Schöneberg was home to an above-average number of civil servants and military personnel, and numerous residents lived on their own assets and pensions. In a comparison of all Prussian cities, Schöneberg was in fifth place in terms of tax revenue per capita in 1903. For this wealthy target group, Haberland and his company wanted to create a new, attractive residential area on a purely private basis - the “ Bavarian Quarter ” - and initially found themselves in harmony with the city authorities. The good agreement was later permanently disrupted after the city ​​council and city ​​council introduced a capital gains tax in 1908 and thus impaired the profit expectations of the BBG. Haberland also felt disadvantaged early on by anti-Semitic tendencies. During the National Socialist rule in the German Reich , the Haberland's property was " Aryanized ". Georg's son Kurt, who had succeeded him in the management, died in 1942 in Mauthausen concentration camp .

The original development plan stipulated that a horticultural decorative square should be created at the intersection of two busy streets - Martin-Luther-Strasse and Motzstrasse. However, some of the landowners affected were able to influence the responsible body so that it was not they who had to cede their valuable building land for it, but a fellow citizen named Engel who was not represented on the local council. Its terrain was a little further to the west - that is where the new square was created. The Berlin suburb of Schöneberg at that time belonged to the Teltow district .

In the autumn of 1898, the Bodenbaugesellschaft announced a competition to design a square , which was initially called "Platz Z", later named "Viktoria-Luise-Platz" in honor of the only daughter of Kaiser Wilhelm II. In the summer of 1899, the emperor decided on the design with the motto "calm" by Fritz Encke from Potsdam , a representative of the reform efforts in horticulture that were current at the time. With his design, Encke went beyond the type of exclusively representative jewelry square that predominated in Berlin at the end of the 19th century. He also used traditional elements, but at the same time provided an early example of a changed objective - the improvement of urban living quality through “social green”. In an inner space shielded by vegetation , he designed a quiet and relaxing place to stay for the residents of the district with a fountain in the center. Encke's plan was carried out almost unchanged. The only notable deviation was a fountain in a flat round basin instead of a planned high fountain with several bowls . In its center several nozzles emitted fine water jets, a larger central fountain about seven to eight meters high dominated the appearance of the square. A wide strip around the basin embedded in the floor was designed with flower borders. The circle of flowers was in turn surrounded by wide footpaths. The basic shape of an elongated hexagon was developed from the specification of the six streets converging at different distances. Encke explained:

“A space that appears oval to the eye of the visitor […] has been cut out through planting, which appears to be enclosed by woody plantings all around. It is arranged in such a way that it is coherently high and strong on the narrow sides of the system and at the junctions of the cross paths, while in between it sinks to 1.50 meters so that passers-by [...] can see the fountain system, etc. "

- Information board on Viktoria-Luise-Platz, east side.

The streets leading to the square were continued there as wide paths.

Viktoria-Luise-Platz was inaugurated with a big festival on June 9, 1900. In his memoirs, Georg Haberland described how on this occasion the square and the new streets were electrically lit with the help of a small power station - the neighboring district still had poor gas lighting . In the evening an illuminated fountain that was visible from afar shone. "At 12 1 ⁄ 2   o'clock I switched the light off so that the atmosphere wasn't too happy."

In the 1900 address book Viktoria-Luise-Platz and the surrounding streets are not included for the suburb, but for Berlin. However, the area in 1900 is still undeveloped; Bayreuther Strasse (1958: Welser Strasse) crosses Motzstrasse at Z Platz . According to the 1901 address book, houses 1, 3 and 4 have already been occupied, No. 2 is registered as Motzstraße 26. The houses with the numbers 5–9 are listed as new buildings, but number 6 is listed as a construction site of the Lette Association, to which the street 19 between the houses 6 and 7 is noted. Without another cross street, houses 10 and 11 (partially inhabited) and 12 (still uninhabited) are included between Neuer Bayreuther and Neuer Winterfeldtstraße. Address book 1905 the place is assigned to the Berlin post district W 30, with the reference “go. z. Schöneberg ”. The numbering begins on Winterfeldtstrasse with the 14-party house 1 in a counterclockwise direction to Motzstrasse. This is followed by the 6- / 8-party houses 2–4 connected to Motzstraße 26 to Neuen Bayreuther Straße , followed by houses 5–7 (see also Neue Bayreuther Straße 8 and 6 and Regensburger Straße 1), whereby the owner of house no. 6 is the Lette Association. House 8 (also: Motzstraße 26) is between Regensburger and Motzstraße and to Münchener Straße 9 and 10 and above to Winterfeldstraße are Viktoria-Luise-Platz 11, 12 and 12a, multi-party apartment buildings.

The square was included in the Berlin street list under the number 7163. The surrounding buildings bear addresses of the square. House 1 is between Winterfeldtstrasse 98 and Motzstrasse 53, with which it is connected. Houses 2–4 (continuously) and 5–7 follow Welserstraße to Regensburger Straße, building 6 belongs to the Letteverein. House no. 8 is next to Motzstrasse no. 56. On the southern edge, houses 9 and 10 follow to Münchener Strasse, followed by 11, 12 and 12a to Winterfeldtstrasse. This numbering exists from the beginning. The tram ran around the square from the beginning of the 1910s, with the loop being closed in the southwest. The underground station is in the northeast on Motzstraße. Coming from Motzstrasse, the underground line continues under the square and under Münchener Strasse. 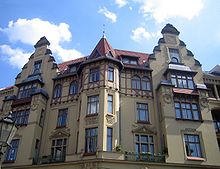 Old building on the edge of the square

The city administration and the construction company had a common interest in not allowing any deep building blocks in the new, uniformly middle-class residential area. Such blocks often acted as a pattern of social inequality: the front buildings for higher earners were decorated with ornamental architecture, while poorer tenants lived in the dark, bare, unhealthy rear buildings. In the Bavarian Quarter, existing deep building blocks were not given to industry or trade, but used for schools or administrations. At Viktoria-Luise-Platz 6, the extensive block of the Lette-Verein provides an example of this. The establishment founded in 1866 - originally an "Association for the Promotion of Employment of the Female Sex" - a vocational training center for young men and women in predominantly artistic professions ( graphic , photo and fashion design ) as well as in housekeeping and some technical subjects (such as laboratory technology). The architect of the building was Alfred Messel , who was responsible for prominent buildings in Berlin such as the Pergamon Museum and the Wertheim department store on Leipziger Platz . For the Lette-Verein he designed cautiously classically structured facades with a representative main portal.

The perimeter development of the square was essentially completed by the opening date, contemporary critics found it regrettable that neither the building company nor the Schöneberg city administration “tried to exert any significant influence on the symmetry or style in the facades”. The Berlin architects had "profoundly abused this freedom and, unconcerned about the regular shape of the square, placed Brandenburg brick buildings next to secessionist miracles, artistically elegantly structured baroque facades like that of the Lettehaus next to the modern splendid Berlin building with gold-striped domes and high- winged geniuses ." Judgment on the overall architectural impression is usually more positive, but a complete picture of it can only be made on the basis of historical images.

Soon after its completion, the square was temporarily affected by construction work on a new line of the underground railway. On this occasion some bones of prehistoric mammals came to light. The U4 line (then: Line B I ), opened on December 1, 1910 and only three kilometers long, was initially a separate company of the city of Schöneberg with its own power supply, its own wagons and its own depot (see: History of the Berlin U-Bahn ). The architect of the listed underground station Viktoria-Luise-Platz was Ernst Deneke, the entrance is on the eastern side of the square.

Apart from damage caused during World War II , the structure of the square remained almost unchanged until 1957. This was followed by a rigorous modernist redesign, regardless of the historical circumstances. In 1979/1980 this step was reversed. The nature conservation and green areas office of the district office had the square restored according to an implementation plan of the Berlin garden monument maintenance according to the historical model. In order to create more usable space for strollers, the flower beds around the fountain were replaced by multi-colored paving based on patterns from the plant ornaments once created by Encke. 25 trees were replanted for the double-row lime tree avenue that delimits the square from the traffic; 24 benches and 25 lanterns in the Wilhelmine style of the early days completed the furnishings. After the square was designated as a garden monument in 1982, the last major step followed in 1994/1995 was the repair of the fountain with the large fountain, the visual reference point of all streets leading to the square. In 2010 the status changed to “protected green space” (previously: “green space on public roads”). The area around Viktoria-Luise-Platz is one of the preferred residential areas in western Berlin's inner city; the Kurfürstendamm is only about one kilometer away.

Ironic suggestion to rename it "Mulch-Platz"

The historic green area of ​​Viktoria-Luise-Platz was planted for decades in consultation with the State Monuments Office based on historical models. The ornamental planting of the borders took place twice a year: in the spring mostly with different colored pansies , gold lacquer or belli and as summer planting with hardworking lizards or marigolds , each complemented by spherical and columnar solitary trees.

In December 2015, the Tempelhof-Schöneberg district announced in camera that it would no longer plant the listed floral decorations that had been cultivated for 35 years for cost reasons. According to the citizens and the State Monuments Office, this contradicts the legal obligations to preserve the garden monument. It also sends a fatal signal from Berlin politics in preparation for the 2017 International Garden Exhibition in Berlin.

The public protest overshadowed the traditional opening ceremony for the fountain season on March 23, 2016 in partnership with Wall AG . District Mayor Angelika Schöttler received 2600 signatures from citizens who demanded that the planting of flowers be resumed. The State Monuments Office then invested 120,000  euros in redesigning the square. Structural systems were renovated and a new planting plan for the beds created, so that the inauguration of the system took place on March 23, 2017.