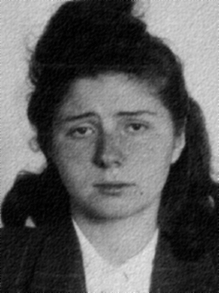 Liane Berkowitz was the daughter of the concert master and conductor Victor Wasiljew and his wife, the singing teacher Katharina Jewsienko. The family fled the Soviet Union to Berlin in 1923 . Soon after the husband's death, the mother married Henry Berkowitz, who immediately adopted Liane. Berkowitz made sure that Liane was able to prepare for the Abitur from 1941 onwards at the Heilsche Abendschule private high school .

There she joined the circle of friends around her classmate Eva Rittmeister and her husband John Rittmeister , who also included Ursula Goetze , Otto Gollnow , Fritz Thiel and Friedrich Rehmer . Under the guidance of John Rittmeister, the Freundeskreis developed into a circle of opponents of Hitler who later worked with Harro Schulze-Boysen in the Rote Kapelle resistance group against the Nazi regime. She became engaged to Friedrich Rehmer and was pregnant by him when she was arrested.

Together with Otto Gollnow, her fiancé was wounded in the hospital, Berkowitz stuck around 100 sticky notes on the evening of May 17, 1942 between Kurfürstendamm and Uhlandstrasse . The notes said:

They wanted to protest against the exhibition The Soviet Paradise of the Reich Propaganda Management of the NSDAP . They also wanted to show that the anti-fascist resistance was still active in Germany. It is not certain whether Berkowitz and Gollnow were unobtrusively accompanied and protected by Harro Schulze-Boysen during this action.

In the course of breaking up the group, Liane Berkowitz was arrested and charged on September 26, 1942. Friedrich Rehmer, who was supposed to cure a serious war injury from the Eastern Front in the Britz military hospital , was arrested from the sick bay on November 29, 1942. On January 18, 1943, the Second Senate of the Reich Court Martial sentenced Berkowitz and Rehmer, together with other friends involved in the sticking action, to death “for aiding and abetting the preparation of high treason and for favoring the enemy ”.

When the Reich Court Martial recommended that Adolf Hitler release the pregnant Liane Berkowitz during the review of its verdict , the latter expressly refused. He had the death sentence confirmed and countersigned by Field Marshal Wilhelm Keitel .

In the women's prison in Barnimstrasse , Liane Berkowitz gave birth to her daughter Irina (Irka) on April 12, 1943, who was looked after by her grandmother from July 1943.

The daughter Irina died on October 16, 1943 in the Eberswalde hospital under unexplained circumstances. She was probably the victim of a Nazi homicide campaign, possibly also due to the malnutrition of Liane Berkowitz during pregnancy.

Liane Berkowitz belonged to the Russian Orthodox Church . Your letters from death row are shaped by a deep faith. The Catholic prison chaplain Peter Buchholz made it possible for her to receive communion on the day of her death .