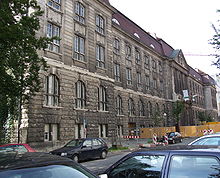 The Reich Court Martial (RKG) was the highest German military court during the National Socialist era . 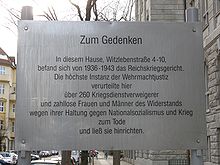 The separate jurisdiction for members of the military (see: Military Court ) that existed during the German Empire was abolished on August 17, 1920 in accordance with Article 106 of the Weimar Constitution , with the exception of military jurisdiction for members of the Reichsmarine on board warships. This also meant that the Reich Military Court , which had existed since October 1900, was no longer its highest instance.

Shortly after the National Socialists came to power , military jurisdiction was reintroduced by the law of May 12, 1933. The institution of the Reich Court Martial was established by another law on October 1, 1936.

According to Section 14 of the Ordinance on Military Criminal Procedure in War and in the case of special operations , the Reich Court Martial was responsible for offenses such as high treason , treason and war treason , provided that these persons were not in the area of ​​operations or belonged to an armed forces association that was directly subordinate to the commander-in-chief of an army. The Reich Court Martial was also responsible for all criminal proceedings against officers in the rank of general or admiral.

For severe cases of defeat of military strength according to § 5 Paragraph 1 Number 1 of the Special War Criminal Law Ordinance , the Reich Court Martial was the only first and last instance ; thus the trial of religiously motivated conscientious objectors fell within his jurisdiction. With the 7th Implementing Ordinance for the War Criminal Procedure Ordinance of May 18, 1940 (RGBl. I p. 787), the exclusive jurisdiction of the Reich Court Martial in the case of disruptive military forces was restricted. In May 1940, the Reich Ministry of Justice transferred responsibility for civilians to the special courts . By ordinance of January 29, 1943 (RGBl. I p. 76), the People's Court was given jurisdiction for cases of “public disintegration” as well as cases of “deliberate evasion of military service” (Section 5 (1) No. 1 and 3 of the Special War Criminal Law Ordinance).

The President of the Reich Court Martial could confirm or revoke judgments as judge , unless Adolf Hitler, as the “Supreme Court Lord of the Wehrmacht”, reserved this for himself.

The first president of the Imperial Court Martial was General Walter Heitz . Admiral Max Bastian served from September 1939 to the end of October 1944 ; his successor was General Hans-Karl von Scheele . The sick Max Bastian was represented by Paul von Hase in 1943/1944 . By the end of the war, a total of 190 judges had worked at the Reich Court Martial for a shorter or longer period.

The Reich Court Martial consisted of three, from November 1941 four senates, each with four military justice officers and three officers. The negotiations were led by a president of the senate, who was assisted by a Reich judicial judge and three officers. For a short time in 1943 a central special district court was affiliated with the Wehrmacht; In 1945 the senates were reduced to three judges. The Reich War Prosecutor was assigned to the Reich Court Martial as the prosecuting authority with twenty military lawyers. Upper Reich war lawyers were Walter Rehdans and from 1943 Alexander Kraell . 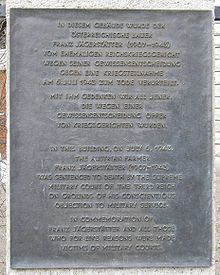 In the period from August 1939 to February 7, 1945, the Reich Court Martial passed 1,189 death sentences , including 313 for treason, 96 for high treason, 24 for treason, 340 for espionage and 251 for refusal and undermining military strength. A total of 1,049 of these death sentences were verifiably carried out.

Although the ordinance on special criminal law in war and in the case of special efforts provided for imprisonment for less severe cases, the RKG imposed almost without exception the death penalty for refusing to do military service for religious reasons . These judgments primarily concerned Jehovah's Witnesses and Reform Adventists . After numerous interventions by pastors , the Reich Court Martial went over to granting objectors who had already been convicted the possibility of revocation. In this case a prison sentence of three to four years was imposed, which was to apply after the war.

In addition to special courts and the People's Court , the Reich Court Martial was also involved in proceedings under the Night and Fog Decree . From December 1942 to September 1943 the RKG conducted more than 20 negotiations against around 80 members of the resistance group around Arvid Harnack and Harro Schulze-Boysen . The 2nd Senate under Alexander Kraell applied the so-called " Violent Criminal Ordinance " in order to be able to severely punish several women who could only be shown to have had aiding and abetting.

In a judgment of April 2, 1940, the Reich Court Martial had extensively extended the meaning of the term “public” to private conversations, so that every “defeatist statement” could be regarded as a degradation of military strength. Norbert Haase counts the draconian judgments according to the widely interpretable National Socialist criminal laws, the exclusion of the public in the processes conducted as “secret matter of command”, the often practiced non-handing of indictments and the possibility of an alibi as “essential features of the practice of the Reich Court Martial” on. In the Second World War as a legal assessment of the institution - - whether the relevant court constitution law and procedural fundamentals have changed for the enforcement of what was considered "war necessary for military and appropriate for the Nazi sense."

Annulment of the judgments

In 1998, a law to repeal injustice judgments in the criminal justice system declared “convicting criminal court decisions which were made in violation of elementary ideas of justice” null and void. This also includes many judgments of the Reich Court Martial. With a supplement to the NS-AufhG from 2002, the judgments of courts from the NS-era against deserters and homosexuals were overturned. Only with a further amendment to the National Socialist AufhG in 2009 were the judgments for war treason according to Section 57 of the MStGB legally overturned.