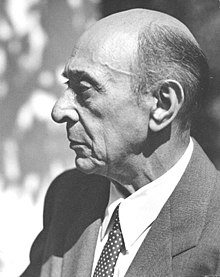 Atonal music generally describes music characterized by so-called atonality , which is based on the chromatic scale , the harmony and melody of which is not fixed on a tonal center or a fundamental tone - in contrast to the (major-minor) tonality or modality . The term was initially used with polemical intent by conservative music critics on the compositions of the Vienna School , in particular on Arnold Schönberg's Three Piano Pieces op. 11 (1909), and was originally more a catchphrase than a music theory term. Both Schönberg and Alban Berg rejected this term because they understood it in the sense of “without tones” (instead of “without key”) (e.g. in the radio dialogue Was ist atonal? From 1930).

In retrospect, the paradigm shift between tonality and atonality at the turn of the century represents less of a "revolution" than an "evolution", the boundaries of which are increasingly blurred by the addition of "free" (tonality / atonality) in (music) scientific terminology. Although there are already strong chromatic passages in works of the 16th century, especially in the “Mannerist” Italian madrigal , which were taken up again in the late Romantic period, atonality can only be spoken of from the early 20th century. The early atonality of the first half of the 20th century can be divided into a phase of so-called free atonality and from around 1925 into a phase of twelve-tone , later serial atonality.

The abandonment of tonality, apart from a few counter-movements, is one of the few constants of new music and a connecting element of various styles of modernity , such as aleatoric , microtonality or micropolyphony . Thus, on the one hand, atonality has contributed to the increasing complexity (from the point of view of its proponents) or to the increasing arbitrariness (from the point of view of its opponents) of contemporary music and the associated "break with the audience", on the other hand, due to its diverse manifestations, it is prohibited A general aesthetic judgment (be it positive or negative).

Franz Liszt and Alexander Scriabin had already touched on atonality in his late piano pieces . The overgrown use of chromaticism during the late Romantic period or by composers like Max Reger had an atonal tendency. The use of bi- or polytonality , the use of two or more keys at the same time, also led to the border area of ​​atonality. The first phase, which consists in giving up traditional harmony, is also called "free atonality". Schönberg tried to create a principle of order within atonal music and developed the method of “composition with twelve only related tones” (later apostrophized as the twelve-tone technique ), which he began in 1923 (in some of the Five Piano Pieces op. 23 and in most of the movements of the Suite for Piano Op. 25 ) was first used. This twelve-tone principle does not necessarily guarantee atonality, but merely a largely even distribution of the twelve tempered semitones within the compositional movement. Depending on the row structure and the vertical organization of the tones, it is entirely possible to compose pieces in row technique that are perceived as tonal. Schönberg even deliberately constructed some of his complementary rows in such a way that, after the vertical unbundling of their hexachords, they can be aligned with a tonal center. Through appropriate material disposition, he then generates alternating tonal and atonal zones with a single basic row. In the Piano Piece, Op. 33a and in the Piano Concerto, Op. 42 , this approach is combined with a clear intention in terms of form and content.

The twelve-tone technique evolved into serialism after World War II and dominated the avant-garde of serious music during the 1950s in Europe.

Other important pioneers of atonal music were, besides Alban Berg and Anton von Webern , who, together with Schönberg , are subsumed under the so-called Second Viennese School , Ernst Krenek , Igor Stravinsky , Béla Bartók and many others.

In his Philosophy of New Music , published in 1949 , Theodor W. Adorno advocates Schönberg's atonal compositional style and contrasts this with the neoclassical style of Igor Stravinsky, which is viewed as a relapse into obsolete compositional technique . For Adorno, Schönberg's step towards atonality around 1910 means the liberation of music from the constraints of tonality and thus the unhindered development of musical expression qua free atonality with the full instinctual life of the sounds. On the other hand, in the same writing, he decidedly opposes the twelve-tone technique (later developed by Schönberg) because he saw the danger of a mechanical composition here. The comment by old Schönberg when he was informed that his method of composition had spread across the world also fits in with this: "Yes, but do you also make music?"

Like every artistic revolution (which from a later point of view often presents itself more as evolution than further development), the means of atonality were also violently attacked by conservative minds. The conductor Ernest Ansermet, for example, in his book The Basics of Music in Human Consciousness from 1961, denied atonal music its right to exist at all, since in it a meaningful musical formal language is abandoned and, due to the loss of a meaningful tonality, a sound aesthetic judgment by the listener is not is possible. The creation of a psychic echo in the listener through atonal music only feigns meaningfulness. ( In his article, Carl Dahlhaus criticized Ansermet's polemics against Schönberg (Neue Zeitschrift für Musik, 1966) as unscientific.)

Most objections are based on two basic assumptions:

On the other hand, it was argued that

Atonality is also referred to in the area of ​​popular music, as exemplified by the Berlin Atonal Festival, which has been taking place again since 2013.

Around 1960 atonal structures were achieved in free jazz . Free improvisations (partly in a collective) and a very free design are decisive here. At the same time, basic rhythmic patterns are often maintained. Jazz research was able to show that improvising musicians often orientated themselves to modal scales, i.e. tonal influences are also integrated into the game ( Jost 1975). The use of leading tones or basic motifs is also typical. Similarities with and differences to post-serial music are analyzed by Kumpf (1976).