Braunichswalde is a municipality in the Thuringian district of Greiz . Administratively, it belongs to the Wünschendorf / Elster administrative community .

Braunichswalde belongs to the Ronneburg arable and mining area and is located on the Fuchsbach , a small tributary of the White Elster . The nearest towns are Berga / Elster (7 km southwest), Ronneburg (8 km north) and Crimmitschau (12 km east).

Neighboring communities are Gauern , Linda b. Weida , Rückersdorf and Seelingstädt in the district of Greiz and the town of Crimmitschau in the Saxon district of Zwickau . The latter town only indirectly borders the town of Blankenhain with the town of Großpillingsdorf .

The only sub-community of Braunichswalde is Vogelgesang .

Braunichswalde was first mentioned in 1307 as "Villa Brunswalde". The Angerdorf belonged to Sachsen-Altenburg until 1918 and was part of the Ronneburg district office since 1900 . In 1922 it went to the district of Gera . From 1950 to 1990 the place was strongly influenced by uranium mining by SDAG Wismut , but extensive measures were carried out afterwards that made the village more attractive again and in 1998 led to the award of the silver plaque in the national competition Our village should become more beautiful . On December 4, 1952, the place belonging to the Schmölln district came to the Werdau district , but on July 1, 1958, it became part of the Gera-Land district , just like Vogelgesang, which had belonged to the Werdau district since July 25, 1952. The current district was incorporated on January 1, 1960.

Braunichswalde belongs to the diocese of Dresden-Meißen .

On January 1, 1960 Vogelgesang was incorporated into Braunichswalde.

In 1933 Braunichswalde had 674 inhabitants and Vogelgesang had 129 inhabitants. In 1939 there were 669 and 143 inhabitants respectively. From 1995 to 2001 Braunichswalde was able to follow the general trend of population immigration to rural areas and thus increase its population. The redesign of a single-family housing estate ( Sonnenland ) and the filling of existing building gaps played a major role in this . The rural exodus has increased again in recent years . 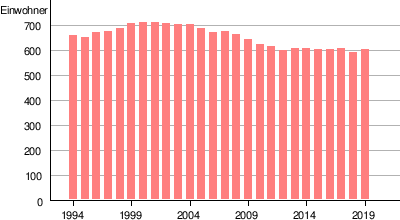 Since the local elections on May 25, 2014, the municipal council has consisted of eight CDU members. As in the previous election in 2009, they were already determined by majority vote. The turnout was 73.6%, which is a decrease of 1.0% compared to 2009.

The tree at the top right stands for the former two-stemmed beech of the Braunichswalde district, the bird at the bottom left for the Vogelgesang district. The walls in the other two quarters show the typical local use of green stone .

Braunichswalde is characterized by its lively club life. This can be recognized, among other things, by the fact that most of the festivals in Braunichswalde are organized and hosted by the clubs. The following festivals are held annually by the clubs:

Village square with a fountain

The state road L 1081 leads from Ronneburg to Werdau through the Vogelgesang district . The community has two bus stops , which are served on weekdays by Regionalverkehr Gera (RVG) and the private bus company Piehler on lines 212 Gera – Friedmannsdorf and 213 Gera – Werdau – Zwickau. Since the end of the passenger train service on the Wünschendorf – Werdau connection , the nearest passenger station is in Ronneburg, eight kilometers away. The Wismut works railway runs through Braunichswalde and is still used daily by sand trains. At the time of uranium ore traffic, the Braunichswalde station was the works station for processing plant 102 in Seelingstädt and the transfer station from the Wismut works railway to the Deutsche Reichsbahn .

The local economy is shaped by small to medium-sized companies . In the early 1990s the community were with the 6.3 hectares in the south industrial park morning sun created new commercial space.

The day care center "Anne Frank" was established in 1958 and the building was renovated in 1995.

Cities and communities in the district of Greiz