The title of this article is ambiguous. For the municipality part of the Saxon city Trebsen see Seelingstädt (Trebsen) .

Seelingstädt is located in the Ronneburg arable and mining area . The Pöltschbach runs in an east-west direction to the Weißen Elster near Berga . In the east of the municipality, the regional watershed runs between the White Elster and the Pleiße . Not far from the eastern border of the municipality, the Erdbach rises in a strange field, which together with the Koberbach feeds the Koberbach dam and flows to the Pleiße. The nearest towns are Berga (6 km to the west), Werdau (11 km to the south-east), Ronneburg (11 km to the north) and Crimmitschau (12 km to the north-east).

Seelingstädt was first mentioned in a document in 1230. Seelingstädt and Chursdorf owe their founding - like so many other places in the area - to the missionary and colonizing activities of monks from the Mildenfurth monastery near Wünschendorf / Elster, which was established in 1193 .

The legal affiliation of the municipalities, which were independent until 1938, often changed, Chursdorf, for example, belonged to the upper and lower courts of Werdau in 1502, while Seelingstädt belonged to Zwickau. Both came from Ernestine to Albertine Saxony in 1547 . As so-called official villages, they were only ever subject to the sovereignty of the country, so they were never subject to lordship and were allowed to exercise the lower jurisdiction themselves.

From 1547 to 1952, Seelingstädt was part of the Albertine Electoral Saxony or the kingdom and later Free State of Saxony that emerged from it in 1806 . After the dissolution of the states in the GDR in 1952, the community came to the Chemnitz or Karl-Marx-Stadt district . 1958 Seelingstädt was, however, the district Werdau for county Gera reclassified and thus came to Gera district , on the post-1990 it finally found its way to the Free State of Thuringia.

The first craftsman named for Seelingstädt was a wheelwright in 1571 . Soon the news of a blacksmith followed. These were the artisans who directly served the farmers and their work.

Beer was already brewed in Seelingstädt in the early Middle Ages. Around 1563 all important religious and secular rights to brew beer were destroyed by a fire. That was a hard blow for the people of Seelingstadt, because without a valid privilege they were no longer allowed to brew. In their distress, they wrote a letter to the elector in 1602 and asked for their permission to be renewed. The community brewery in Seelingstädt, which still exists today, was built in 1708.

A school is mentioned as early as 1570 and also a "schoolmaster". The first new school building in Seelingstädt was dated in 1680. After this school became too small and dilapidated, a new school building was built in 1824, the payment of which (2092 thalers, 13 groschen and 11 pfennigs) led to heated arguments between the districts. The former school building, which is still used today as a refurbished school camp, was built in 1894 at a cost of 25,000 marks and served as the Seelingstädter elementary school until the completion of the new school in the Seelingstädt Bahnhof district in August 1965 (cost 1.65 million marks).

From 1951, Uranerz was mined in several opencast mines by Wismut AG / SDAG in the Seelingstädt area. In 1961, Wismut's processing plant 102 went into operation at the Seelingstädt location. Until the end of 1990 the company was part of the raw material base of the Soviet nuclear industry . Those in the know therefore called the city Seelinggrad, alluding to Russian city names .

In the 1960s, the military training facility " Peter Göring " of the Ministry of Higher Education was built on the site of the bismuth accommodation (north of the train station) , in which almost all male students in the GDR who were fit for military service had to complete a five-week military reservist training course Reserve officers were trained. Today, the buildings are used by the Thüringen GmbH Berufsförderungswerk , which is the largest employer in the area with almost 200 employees.

Drawing of the Chursdorf Christ Church (around 1840)

Seelingstädt and the later district of Chursdorf became Protestant in 1533 . In 1925, of the 525 inhabitants, 506 were Evangelical Lutheran and only twelve were Roman Catholic .

The place has two churches: The St. John's Church was built in its current appearance in 1898 after a new building by 62 parishioners was rejected in 1893. Only after the neighboring school was built in 1894 did the new church take shape again. The church has a Jehmlich organ and a Gothic tracery window from 1430.

The Christ Church in Chursdorf was built in the 13th century and rebuilt from 1970 to 1981. It has a Jehmlich organ from 1909 and ceilings and gallery paintings worth seeing, made between 1738 and 1740, and a beautiful baroque pulpit.

Converted in July 2011, for the first time in the Ev.-Luth. Parish of Seelingstädt, the evangelical pastor who has been working in the village since August 2002 and a married father to Catholicism.

Development of the population of Seelingstadt from 1994 to 2012. The increase from 1996 to 1998 results mainly from the incorporation of Friedmannsdorf on January 1st, 1997.

Blazon : “Divided and half-divided; above in black a growing golden, red-tongued and armored lion, below in front in silver a scythe blade lying diagonally to the right, behind in red a silver teeth. "

The uranium processing plant, which has been in operation since 1962, was closed after the fall of the Wall and the site was renovated. Today the SUC Sächsische Zusammenarbeit Consulting GmbH operates a plant for the microbiological treatment of organically contaminated hazardous and non-hazardous waste. There is also a concrete plant in the village as well as several smaller craft and retail businesses.

A planned wind farm near the Chursdorf district with ten wind turbines 150 meters high and only 200 meters from the state border with Saxony was not approved by the Thuringia regional administration office in October 2009. The office saw in this an excessive impairment of nature and landscape protection, monument protection, tourism and recreation on the Saxon side. With a judgment announced on April 8, 2014, the 1st Senate of the Thuringian Higher Administrative Court in Weimar determined that the regional plan for East Thuringia is ineffective insofar as it defines priority areas for wind energy and at the same time provides that larger (so-called spatially significant) wind turbines are not outside these priority areas are permitted.

The federal highway 175 runs through Seelingstädt , and the villages Seelingstädt-Bahnhof and Chursdorf are crossed by the provincial road  1081 from Ronneburg to Werdau . In Seelingstädt-Bahnhof, the 2337 branches off via Seelingstädt-Dorf to Teichwolframsdorf, the Morgensonne industrial area on the municipal boundary and belonging to Braunichswalde is the starting point of the Saxon state road S 294 to Crimmitschau-Mannichswalde and Neukirchen / Pleiße . It run on working days except Saturdays from PRG passenger and tourist traffic Greiz operated bus line 20 Greiz-Teichwolframsdorf-Seelingstädt that the regional transport Gera (RVG) and the private bus companies Piehler operated bus lines 212 Gera Friedmann village and 213 Gera Werdau Zwickau and on School days a pair of buses on the PRG-operated bus route 218 Weida – Clodra – Berga – Wolfersdorf – Seelingstädt. RVG line 219 Gera – Wünschendorf – Linda – Wolfersdorf – Seelingstädt is only served on school days in the afternoon from Seelingstädt in the direction of Gera. From 1876 to May 29, 1999 the community had a connection to the Wünschendorf – Werdau railway line . Passenger traffic was stopped on May 30, and since then the nearest train station has been in Berga, six kilometers away. 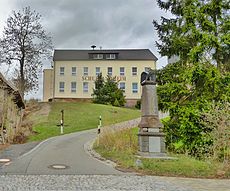 The Thuringia Vocational Promotion Agency is located in Seelingstädt , a regular school of the administrative community and a school camp.

Cities and communities in the district of Greiz