The list of the Dukes of Normandy contains all medieval rulers of the historic French Duchy of Normandy from its creation in 911 to its integration into the French crown domain in 1204, as well as the princes of the royal house apanaged with it. 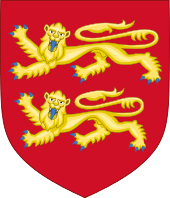 The coat of arms of Normandy known since the late 12th century.

The list of dukes begins with the Viking leader Rollo , who baptized himself in 911 and was given by King Charles III. was assigned as a fief to the simple land on the lower reaches of the Seine around Rouen . However, it is not possible to clearly determine which titles the first two Norman princes had, as no contemporary documents have been preserved for them. However, they were retrospectively referred to as dukes by medieval historians . In the two documents issued to him (968, 990), Richard I. Fear is given different titles as margrave (marchio), prince of the Normans (princeps Normannorum) and as count (comes) . The cartular of the Abbey of Saint-Père-en-Vallée near Chartres already names him Duke (dux), but this title (Normannorum dux), among many others, was first given to him in the document traffic of his son Richard II the Good official use. From then on, the title of duke remained in use on an equal footing with others until 1204. In documents issued by the chancellery of the French kings, the Norman princes were almost exclusively referred to as counts.

Apanaged dukes from a royal house

further use of the title:

William the Conqueror established a personal union between Normandy and England in 1066, which is known today as the "Anglo-Norman Empire" and which was expanded in 1153 to the " Angevin Empire " of the Plantagenets. This union was ended in 1204 by King Philip II Augustus of France by occupying Normandy. Of the old duchy, only the Norman Channel Islands remained in the possession of the English / British monarchs, who still use the title "Duke of Normandy" in their titles because of them.