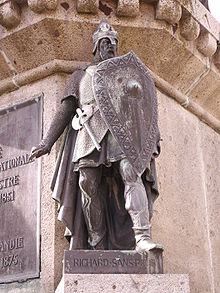 He was the son of Wilhelm I , Count of Rouen and Jarl of the Normans , and von Sprota, a Breton prisoner of war and concubine , who married a wealthy miller named Esperleng after Wilhelm's death.

When Wilhelm I was murdered in 942, Richard was still a child, so he could not prevent King Ludwig IV from occupying Normandy. Presumably he kept him prisoner at his court in Laon and installed a governor in Normandy. Against the resistance of the Normans, who received support from the Danish King Harald Blauzahn , Ludwig temporarily allied himself with his rival Hugo the Great , but was captured by the Normans in Rouen in 945 and handed over to Hugo. Around the same time Richard was able to return to Normandy, where he assumed the title of duke.

Around 956 Hugo the Great named him the protector of his son and later King Hugo Capet and betrothed his daughter Emma of Paris to him, who married Richard in 960, but who presumably died childless (after 966). According to Robert von Torigni , Richard went hunting shortly after Emma's death, where he fell in love with the Danish woman, Seinfreda, during a stay. But she was already married and therefore asked Richard to try his luck with her older sister Gunnora . The children from this relationship were only subsequently legitimized by the marriage.

Richard brought Wilhelm von Volpiano , Abbot of St. Bénigne , into the country and had a Benedictine monastery built on the island of Mont-Saint-Michel and the church of Fécamp, which had been destroyed during the Viking invasions, rebuilt.

Richard's descendants with Gunnor from Denmark are:

Commons : Richard I.  - Collection of pictures, videos and audio files