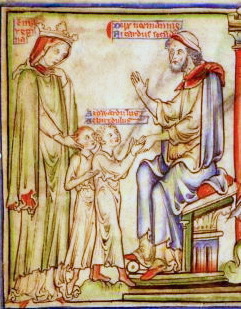 Emma and her sons Alfred and Eduard are given asylum with their brother, the Norman Duke Richard II. Illustration from the Vita of Edward the Confessor, 13th century.

Emma was the daughter of Richard I of Normandy and his wife Gunnora . She first married the English King Æthelred II. The Unready in 1002 and gave birth to Alfred and later King Edward (III.) The Confessor . Their Wittum included the entire city of Exeter , among other things . But she was not able to give her sons a priority over Æthelred's children from his first marriage. After Æthelred's death in 1016 and the accession to the throne by Edmund II. Ironside , a son from Æthelred's first marriage, she and her teenage sons went into Norman exile to her brother Richard II for a short time . As Edmund II, Knut the Great that same year was defeated, but returned immediately to England and in 1017 married Knut, her first husband's competitor for the English crown. The future King Hardiknud comes from this connection .

The grip on power

When Knut died in 1035, history repeated itself again. Emma again tried to secure the kingship for one of her now three sons, and even seized the royal treasure in Winchester . But the 17-year-old Hardiknut could not bring himself to any decisive measure and was also militarily bound in Denmark. Alfred was even murdered in 1036. In the end, Knut's son from his first marriage to Ælfgifu of Northampton , Harold Harefoot , gained power, and Emma went into exile in Flanders from 1037 to 1040 . The dramatic events are described in the anonymous Encomium Emmae Reginae , written in Flanders before 1040 . After Harold's death in 1040, she returned to England and saw her youngest son Hardiknut ascend to the throne. Presumably it also ensured a balance between the king and his older half-brother Eduard, who even participated in the rule from 1041 and became king in 1042 after Hardiknut's death.

The ambitious double king widow is said to have planned another wedding, this time with the Norwegian King Magnus I , which is why Eduard confiscated Emma's possessions and thus definitely disempowered them. Mother and son later reconciled, but Emma eventually withdrew from politics and went to Windsor, where she also died.

with Æthelred II. the Unready :

with Knut the Great :