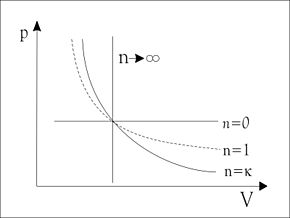 The isentropic exponent (also called adiabatic exponent or heat capacity ratio ) denoted by the symbol  ( Kappa ) or  ( Gamma ), is the dimensionless ratio of the heat capacities of gases at constant pressure ( C p ) and at constant volume ( C V ):

The quotient is a strongly temperature-dependent material property of real gases . Alternatively, it can also be calculated as the quotient of the mass-related or molar heat capacities at constant pressure or constant volume.

Its name was given as an exponent in the isentropic equation or adiabatic equation for ideal gases :

Isentropic changes of state are adiabatic and reversible and thus leave the entropy constant. You step z. B. approximately occurs in large-scale air currents, which is why κ is often referred to in meteorology as the adiabatic exponent , adiabatic coefficient or adiabatic index . In technology, an adiabatic change of state (e.g. in a steam turbine ) is usually not reversible, since friction, throttling and shock processes produce entropy (see " Adiabatic machine " and " Second law of thermodynamics "). These changes of state can approximately be described by a polytropic with a polytropic exponent n that differs from κ . The isentropic is the special case of a polytropic with (see picture).

The isentropic exponent can also be roughly described as follows:

The degree of freedom can be roughly described as follows:

The degree of freedom f of a body indicates how many possibilities of movement this body has within a coordinate system. The individual mass point has 3 degrees of freedom, it can move in space along the x, y and z axes. It has no freedom of rotation, because a point cannot rotate. A system of N points has 3N degrees of freedom. If there are rigid bonds between the points r, the number of degrees of freedom is reduced to 3N - r. Rigid bodies have angled bonds.

Dry air consists mainly of diatomic molecules and has an isentropic exponent of 1.4. This corresponds to the theoretical value for 3 translational and 2 rotational degrees of freedom in the kinetic gas theory , since with diatomic molecules a rotation about the connecting axis is not possible. At very low temperatures, hydrogen (H 2 ) has the same value as the monatomic noble gases, because then the rotation itself is stopped. Rotation of polyatomic molecules and oscillation of linear or slightly angled molecules are already excited below normal temperature , oscillation of rigid molecules only above normal temperature. At much higher temperatures, dissociation and ionization lead to even more degrees of freedom. In the atmosphere, the expansion and cooling of the humid air can lead to condensation of the water. The exponent becomes lower due to the released heat of condensation.