William the Bastard defeats the French in the Battle of Mortemer and sends a messenger to the defeated King Henry I, illustration from Chroniques de Saint-Denis , 14th century.

The city of Cuzcatlan in Mesoamerica in today's El Salvador is, according to legend, founded by the Toltec king Cē Acatl Tōpīltzin Quetzalcōātl . Archaeological finds in Antiguo Cuzcatlan and Izalco indicate, however, that the Pipil culture in Cuzcatlan existed before the year 900, so that the Nahua immigration to this area took place well before that.

Main hall of the Kokawa-dera

The Japanese Buddhist temple Kokawa-dera , which was supposedly founded in 770 , is first mentioned in a document. 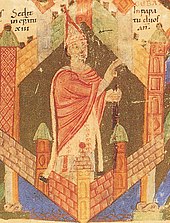 Gebhard I. as depicted in the Pontifical Gundekarianum (1071/72)

After a five-year term in office , Pope Leo IX dies on April 19 . in Rome, probably from malaria. He was released from captivity by the Normans only a month earlier after his defeat at the Battle of Civitate the previous year . With a Roman embassy chaired by the deacon Hildebrand advises Emperor Heinrich III. then on a farm day in Mainz about the new appointment. The emperor uses his right of designation and in September proposes Gebhard I , Bishop of Eichstätt , as Leo's successor. However, Gebhard attaches conditions to the acceptance of the office and asks for time to consider. He not only asked Heinrich to return church goods, but also to keep his diocese, a common practice at the time. The office of Bishop of Rome is still vacant at the end of the year.

On July 16, the papal envoy Humbert von Silva Candida laid a bull of excommunication for Patriarch Michael I in the Hagia Sophia in Constantinople . This leads to the Oriental Schism , the division of Christianity into the Orthodox and Catholic Church, as the end of a centuries-long development in which the eastern and western halves of the former Roman Empire have drifted more and more apart politically and culturally.

The 10th council opens in Narbonne on August 25th . It codifies God's truce (treuga) and God's peace (pax dei), private feuds are prohibited. Killing a Christian is equated with the shedding of the blood of Jesus Christ . Subsequently, a peace movement originated in the south of France and reached Spain, Normandy, Germany and Italy.

On March 8, the local bishop Azelin dies in Hildesheim . His successor in May is the provost of the Palatinate Church of St. Simon and Judas in Goslar and Chancellor for Italy, Hezilo . The consecration takes place on October 15th .

The failure of the Nile to flood leads to a famine in Egypt . The Byzantine Emperor Constantine IX. sends grain deliveries to friendly neighboring country.