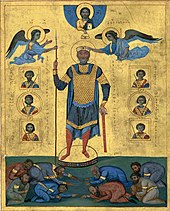 Basil in the armor of a general, at his feet eight figures in submissive prosksynesis ; Replica of an illumination from a psalter, 11th century

Tsar Ivan Vladislav of Bulgaria dies earlier this year during the siege of Dyrrhachium , the exact circumstances of his death are unknown. He is inherited by his eldest son Presian II . But already in February the Byzantine Emperor Basil II conquered Kastoria and several other cities and finally also the Bulgarian capital Ohrid and subjugated the Bulgarian Empire. After submission, Presian and his brothers were accepted as dignitaries at the court of Constantinople , with Presian receiving the high title of Magistros . Maria, the widow of Tsar Ivan Wladislaw, is also handed over to Basil with her children in Ohrid. Bulgaria is incorporated into the empire, which shifts the Byzantine border far to the northwest. 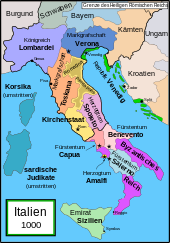 The uprising of the Longobards under Meles of Bari , who want to drive the ruling Byzantines out of Apulia , collapses , which has been relatively successful since the previous year . In the Battle of Cannae on October 1, the rebels, supported by Pope Benedict VIII and others, reinforced by a group of Norman adventurers led by Rainulf Drengot , suffer a crushing defeat against the numerically superior Byzantine army led by Katepan Basileios Boioannes . The Byzantine rule in southern Italy is now stabilized for decades to come, and the Principality of Salerno has to temporarily recognize the Byzantine supremacy again. Meles leaves Apulia after the battle, Rainulf Drengot retreats to Campania with the rest of the Norman army . There they shift to protecting pilgrims who are on their way to the shrine of the Archangel Michael from being pillaged by other highwaymen for a fee.

In Valencia , Abd ar-Rahman IV was elevated to caliph by some Berber leaders after the Hammudids under Ali ibn Hammud an-Nasir came to power in the Caliphate of Cordoba . He can ally himself with the Muslim governor of Saragossa and the Count of Barcelona , but the Hammudids hold on to power in Cordoba . During an attack on Granada , Abd ar-Rahman is abandoned by his Berber troops, defeated and murdered while trying to escape near Guadix . But Ali ibn Hammud an-Nasir is also murdered by a slave in the same year. He is succeeded by his brother al-Qasim al-Ma'mun , the previous governor in Seville .

The Archdiocese of Ohrid
around the year 1020

After the conquest of Bulgaria, the Byzantine emperor Basil II reorganized the Bulgarian Orthodox Church . The previous patriarchate is converted into a diocese. After the patriarch was expelled, the emperor established the archbishopric of Ohrid and the whole of Bulgaria without affecting the existing autocephaly . The archbishopric remains formally independent from the Byzantine imperial church , but the bishops are appointed by the Byzantine emperor. The first Archbishop John I Debranin appointed by Emperor Basil II is still a Slav, but thereafter a continuous Hellenization takes place.

Margrave Heinrich I, the Strong (excerpt from the Babenberger family tree , Klosterneuburg Abbey)