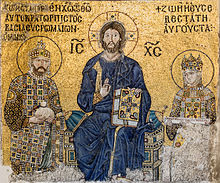 The Byzantine Emperor Michael V , whose relationship with his adoptive mother Zoe was initially good after his accession to the throne last year, soon developed a deep dislike for her. According to contemporary sources, he is enraged by the fact that Zoe is formally above him and first mentioned in proclamations. On 18 / April 19 , he banished Zoe therefore in a monastery. However, the announcement of this decision led to a popular uprising on April 21st , as the population refused to accept the deportation of the legitimate empress. Michael is deposed, blinded and put in a monastery, where he dies on August 24th . After Michael's dismissal, Zoe and her sister Theodora III. destined to be empress. Theodora's reign ended on June 11th when Zoe Konstantin IX. Monomachus marries, who then takes over government affairs with her.

In the same year Georgios Maniakes , whom he had named Katepan of Italy , revolted . Maniakes is proclaimed emperor by his troops, including the Norman Varangian Guard , who supported him in the fight against the Arabs in Sicily in 1037 , and marches on the capital . 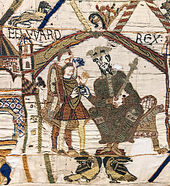 Hardiknut , King of England and Denmark , drinks himself to death at a wedding on June 8th . Since he did not set any accents during his reign, the lofty plans of his father Knut the Great for a long-lived Anglo-Scandinavian family dynasty ruling over Scandinavia and England also die with him . Hardiknut's successor as King of England is his half-brother, Eduard the Confessor , who has been involved in government affairs since the previous year . There is no suitable successor in Denmark. This power vacuum is filled by King Magnus I of Norway , who takes power in the Scandinavian country and subsequently also claims to rule over England.

In February, the Roman-German King Heinrich III. bypassing the tribe's right to vote, the Duchy of Bavaria , which he had previously administered himself for 15 years, to Heinrich II of Luxembourg . The non-tribal duke is therefore heavily dependent on the king.

Taifa Empire Seville under the Abbadids

In the Taifa Kingdom of Seville dies Abbad I. , the first ruler of the dynasty of Abbadids . He is succeeded by his son Abbad II al-Mu'tadid , who will expand his sphere of rule considerably in the following years.

Heribert , Prince-Bishop of Eichstätt , dies on July 24th near Freising after 20 years of rule . Apparently he planned to move the bishopric to Neuburg an der Donau . He even wanted to transfer the bones of the diocese's founder Willibald there . Henry III. and the diocese of Augsburg prevent Neuburg from coming into Heribert's possession. According to Anonymous von Herrieden , the disappointment leads to Heribert's death on the way back from the imperial court. Emperor Heinrich III named his successor. at the intercession of Bishop Bruno von Würzburg Heribert's brother Gezemann . Gezemann and Bruno consecrate the church of the St. Walburg Monastery together on October 14th . Gezemann dies three days later and is buried by Bishop Bruno next to his brother in the cathedral. The 20-year-old Gebhard I is appointed as his successor, but he does not go to Eichstätt, but as Heinrich III's secretary. remains at the imperial court.

Hermann I , Bishop of Münster , dies 10 years after taking office on July 22nd . Rudbert is his successor . Nothing is known about its origin.