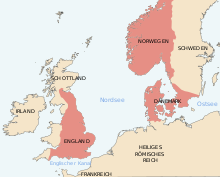 Canute the Great marries Emma of Normandy , the wife of his rival Æthelred , who died the previous year , in order to consolidate his claim to the throne in England , although he had previously married the English noblewoman Ælfgifu of Northampton . Ælfgifu retains her position, however, and her sons Sven and Harald remain in line to the throne. In the same year Knut divides his dominion into the counties of Wessex , Mercia , Northumbria and East Anglia . As Earls he uses Erik Håkonsson in Northumbria , Torkjell Høge in East Anglia , Leofric in Mercia and Godwin in Wessex .