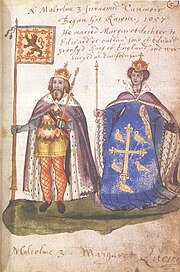 Malcolm III (Gaelic Máel Coluim mac Donnchada ), also: Malcolm Canmore ( Máel Coluim Ceann Mór, Calum Ceannmhor ), (* between 1030 and 1038; † November 13, 1093 near Alnwick ) was King of Scotland from 1058 to 1093 . He was the eldest son of Duncan I (Donnchad mac Crináin). His real nickname was Longneck ("long neck"); His great-grandson Malcolm IV actually bore the nickname Canmore , which he often acquired .

Malcolm's reign lasted 35 years and preceded the Scottish-Norman rule. His kingdom was not congruent with today's Scotland. The north and west were under Scandinavian and Gaelic rule. Malcolm waged a series of wars against the English Kingdom with the aim of conquering the English-controlled part of Northumbria . However, the wars did not lead to any significant result. He also became known less through these wars than through his role as the progenitor of a royal dynasty. Malcolm founded the House of Dunkeld , which ruled Scotland from 1058 to 1286. Four of his sons ( Duncan II , Alexander I , Edgar and David I ) later became kings of Scotland. A fifth son, Edmund , ruled along with his uncle Donald III.

Malcolm's second wife, Saint Margaret of Scotland , is the only saint from a Scottish royal family to this day. Malcolm himself was not distinguished by any particular religiosity. With the exception of the establishment of the predecessor monastery of Dunfermline Abbey , he founded no other religious institutions and did not carry out any church reforms.

Malcolm's father, Duncan I, became King of Scotland in 1034 after the death of his grandfather Malcolm II . Duncan's reign was not very successful and he was killed by his cousin Macbeth at the Battle of Elgin on August 15, 1040 . Although this event is portrayed in Shakespeare's play Macbeth in such a way that Duncan was an old man and Malcolm was an adult, he and his brother Donalbain were still children.

In 1045, Malcolm's family tried to overthrow Macbeth, but they failed. Malcolm's grandfather Crínán von Dunkeld was killed in the process.

There are different versions of the parentage of Malcolm's mother, Sybill. While in the 14th century the Scottish chronicler John Fordun , on whose records Shakespeare's play is based, Sybill is referred to as the niece of the Earl of Northumbria, she is provided with the Gaelic surname Suthen in an earlier list of Scottish kings. Fordun's chronicle also shows that Malcolm spent his childhood and part of his youth in England at the court of Kings Hardiknut and Eduard the Confessor . Other sources indicate that Malcolm's mother took the children into exile at the court of Thorfinn Sigurdsson , the Earl of Orkney , an enemy of the Macbeth family.

It was not until 1057 that Malcolm was mentioned again in historical records, when several chroniclers reported Macbeth's death. Malcolm is said to have killed him on August 15, 1057 in Lumphanan, Aberdeenshire. Macbeth's successor, his stepson Lulach, who was crowned in Scone on September 8, 1057, was killed by Malcolm "by treason" on April 23, 1058 at Huntly's. According to this, Malcolm is said to have been crowned king himself on April 25, 1058. This date is only confirmed by the Irish chronicler Marianus Scotus .

The Orkneyinga saga reports that Malcolm Ingeborg, Thorfinn Sigurdsson's widow, married. Ingeborg was a daughter of Finn Arneson, a chief on the Orkney. Finn is said to have been an adviser to the Norwegian King Harald Hardrade after the Heimskringla . Later he was awarded the title of Count by the Danish King Sven Estridsson .

Marrying Ingeborg ensured Malcolm peace in the north and west; he enjoyed the peaceful relations with his step-sons, Count Paul and Erlend Thorfinnsson of Orkney. Although the year 1070 is mentioned as the year Ingeborg died, it is possible that she died as early as 1058. The Orkneyinga saga reports that Malcolm and Ingeborg had a son named Duncan, who later became king. Some medieval chroniclers, such as William of Malmesbury, assumed that Duncan was out of wedlock, but these were probably just rumors that Malcolm's children, whom he had with his future wife Margaret, were spreading in order to stave off claims to the throne of Duncan's children. Malcolm had another son, Donald, Ingeborg, who died in 1085.

Although Malcolm Tostig gave Godwinson refuge when he was driven out by the Earls of Northumbria, he was not directly implicated in the fateful invasion of England by Harald Hardrade and Tostig in 1066. That invasion eventually ended in defeat at the Battle of Stamford Bridge , in which Tostig and Harald were killed.

In 1068 he granted asylum to a group of English refugees who had fled England before William the Conqueror . Among them were Agatha, the widow of King Edward the Confessor's nephew, and her children. She was accompanied by Gospatric, Earl of Northumbria , and Edgar Ætheling with his sisters Margareta and Christina. A year later, the exiles returned to England to join a revolt in the north. A Danish army under Sven Estridsson joined the revolt, and although King William was able to crush them, his position in the north remained weak.

Malcolm also decided to take part in the war and marched south with his army across the Pennines , devastating Teesdale and Cleveland and then moving laden with booty to Wearmouth . There he met Edgar Ætheling and his family again and invited them to move in with him, but they refused. After Sven Estridsson could be persuaded to withdraw his army after paying a Danegeld , Malcolm also withdrew to Scotland. After King William invaded Scotland in retaliation by Gospatric of Northumbria, the Scots defended themselves with the devastation of the Gospatric properties along the Northumbrian coast by their fleet.

In the same year Edgar Ætheling and his family reappeared at Malcolm's. They were shipwrecked when they tried to flee to mainland Europe. This time they stayed with Malcolm.

Towards the end of 1070, Malcolm Edgar's sister Margareta, the granddaughter of Stephen I , the first King of Hungary , who was later canonized , married Saint Margaret of Scotland . The naming of their children represented a break with Scottish traditions. While Gaelic names had always been chosen so far, the children were Edward (after Margareta's father Eduard the Exile ), Edmund (after Margareta's grandfather Edmund Ironside ), Ethelred (after her great-grandfather Ethelred the unfinished ) and Edgar (after their great-great-grandfather) provided with English names. They had four other children named Alexander, David, Mary and Edith , who later became Queen of England.

After King William had strengthened his position in England, he again attacked Scotland with his army and fleet in August 1072. There was a meeting between Malcolm and Wilhelm at Abernethy , and Malcolm submitted to the English king. As security for the peace treaty, he handed Wilhelm his eldest son Duncan hostage. Such gestures of submission to English kings were nothing new and often had no effect. Malcolm did not obey either and continued to raid Northumbria. In one of these raids in 1080, Bishop William Walcher was killed in Gateshead . Thereupon Wilhelm sent his son Robert (called Kurzhose) with an army to the north, while he commissioned his brother Odo with a punitive expedition in Northumbria. Malcolm again made peace with Wilhelm and held it for over a decade.

Domestically, Malcolm had little to contend with opposition, with the exception of Lulach's son, Máelnectai, of whom the Anglo-Saxon Chronicles for the year 1078 say:

"Malcolm seized the mother of Máelnectai ... and all of his treasures and cattle. He himself managed to escape with difficulty. "

Whatever sparked this dispute, Máelnectai survived until 1085.

When Wilhelm Rufus became King of England after the death of his father, Malcolm did not participate in the rebellions of the supporters of Robert Kurzhose , who claimed the throne for himself. In 1091 Wilhelm Rufus confiscated Edgar Ætheling's lands in England and Edgar fled to Scotland. In May, Malcolm then marched south with his army, this time not to plunder and take slaves, but to besiege Newcastle , which Robert Kurzhose had founded a year earlier. At the same time he wanted to move his southern border from Tweed to Tees to the south.

This danger led the English king to return from Normandy , where he was fighting Robert Kurzhose. When Malcolm learned of Wilhelm's approaching army in September, he retreated north. The English followed him. Unlike in 1072, this time Malcolm was prepared for battle. Nevertheless, through the mediation of Edgar Ætheling and Robert Kurzhose, peace was made, and Malcolm again submitted to the English king.

In 1092 the peace began to crumble, as William Rufus in Carlisle built a new castle and farmers settled there, though the Scots much of the area in Cumbria dominated. Malcolm invited Wilhelm Rufus to a meeting to discuss the problems. Malcolm then left for Gloucester , where the meeting was to take place. On the way there he visited his daughter Edith in Wilton Abbey. When Malcolm arrived in Gloucester on August 24, 1093, he found that the King had not come to the meeting. Instead, he had declared that the English barons should settle the matter. However, Malcolm refused and immediately returned to Scotland. Wilhelm Rufus did not want to provoke a war, but the Anglo-Saxon Chronicles report that one broke out:

“For this reason they parted in great discontent, and King Malcolm returned to Scotland. And soon after his return home he summoned his army and came horribly to England with more hostility than was necessary. "

Malcolm was accompanied by his eldest son Edward, his heir to the throne, and Edgar. Even by the standards of the day, the devastation of Northumbria by the Scots was considered severe.

On the way back to Scotland, Malcolm was ambushed and killed on November 13, 1093 near Alnwick by Robert de Montbray , the Earl of Northumbria . The perpetrator was a relative of Malcolm's, Arkil Morel, the administrator of Bamburgh Castle. It had been Robert de Montbray's lands that Malcolm had just devastated. Edward was also mortally wounded in what became known as the Battle of Alnwick. It is said that Margareta died shortly after Edgar delivered the news of her death.

In the Ulster Annals it is written:

"Malcolm, son of Duncan, Supreme King of Scotland, and his son Edward were taken by the French [d. H. Normans] killed in Inber Alsa, England. His Queen Margaret also died of mourning within nine days. "

Malcolm's body was taken to Tynemouth Priory for burial . He was later reburied in Dunfermline Abbey .

On June 19, 1250, after the canonization of Malcolm's wife Margaret by Pope Innocent IV , Margareta's bones were exhumed and placed in a reliquary. Legend has it that when the reliquary was carried to the high altar of Dunfermline Abbey and passed Malcolm's grave, it suddenly became so heavy that it could not be moved. Thereupon the bones of Malcolm were also exhumed and buried at Margaretas next to the altar.

With his first wife Ingeborg, Malcom had two sons:

His marriage to his second wife Margaret of Scotland had the following children:

Malcolm's accession to the throne is the climax of William Shakespeare's drama Macbeth , but the play does not always adhere to historical facts and has been changed by tradition.